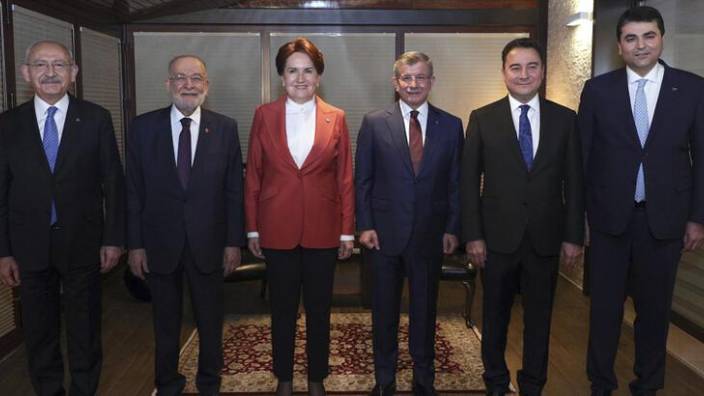 Leaders of six Turkish opposition parties sat last weekend in Ankara, the seat of the government, to draw their country’s exit schedule from the the Erdogan’s executive presidential system which has spelt all possible dysfunctional systems that can happen to any country on earth ranging from eroding the legislative, the judiciary and other democratic institutions.

The National Alliance comprised the Republican People’s Party (CHP), the Iyi Party, the Saadet Party and the Democrat Party—joined by founders of two parent parties that split from Erdogan’s Justice and Development Party (AKP). Turkey’s third largest parliamentary party (HDP) was not present and had not entered into formal coalition with other parties – the fact that it sympathizes with this critical need notwithstanding.

The meeting rose with “determination” to build a strong, transparent and impartial democratic system to stem the executive presidential system which has nullified the parliament, eroded courts independence and made regulatory bodies pawns of the executive. They said they would reveal details of their plans on February 28.  “Today we have taken an important step to build the ‘Turkey of tomorrow’ on behalf of our nation.” Considering the hardships which the people have been subjected to, it wouldn’t have been an overstatement to declare the “building of Turkey of tomorrow and after tomorrow” and “for our nation” rather than just “on behalf…”

The date was not picked from the basket. It coincides with the 1997 “post-modern coup” which bore a memorandum from army generals leading to the fall of Islamist Necmettin Elbakan rule whose party was a forerunner to Erdogan’s AKP and the opposition Saadet Party.  Even then, the date put aside, where are the generals this time round to demand the president’s exit? Even cadets are being jailed. Not unless they have camouflaged themselves somewhere very, very far in the background. It is generally said “once beaten twice shy.” News of the Ankara Chief Public Prosecutor’s Office preparing an indictment against 103 retired admirals demanding prison sentences of up to 12 years is still fresh.

According to latest survey results, both AKP and Erdogan have lost voter support. One survey put Erdogan behind three of his possible rivals. According to the one conducted by the Eurasia Public Research Center (AKAM), “If a general election were to have been held last month (January 2022), the Justice and Development Party (AKP), which has been ruling Turkey practically as a single-party government since 2002, would have received a nationwide vote of 23.3 percent, coming in second after the main opposition party”. This is the lowest in the party history.

AKAM President Kemal Özkiraz says the survey showed AKP falling behind the main opposition Republican Peoples’ Party (CHP), which would have bagged 25.1 % of the vote. It further revealed that even President Recep Tayyip Erdoğan himself would have been defeated by each of his three potential presidential rivals –- CHP leader Kemal Kılıçdaroğlu by a percentage ratio of 55.4:36.8; İstanbul Mayor Ekrem İmamoğlu 60.8:36.7; and Ankara Mayor Mansur Yavaş 61:33.9.

With or without the survey revelations, the point at issue remains: “Which opposition candidate?” And this is where Turkish opposition leaders could pick a leaf from the poll experience of Africa’s Great Lakes Region country of Malawi.

The situation on the ground is that Kemal Kılıçdaroğlu, at a percentage ratio of 55.4:36.8 against Erdogan, has until now failed to beat Erdogan in the polls as CHP leader. Can the opposition take another risk?  He also possesses the lowest victory margin among the three possible contestants. In Turkey there is a saying that “he who rules Istanbul rules Turkey.” Could Mayor Ekrem İmamoğlu at 60.8:36.7 against Erdogan confirm the case? With a bad track record on women’s rights, could Turkey be ripe for a woman president? Or could Ankara Mayor Mansur Yavaş with the highest margin of 61:33.9 remain the choice?

The Malawi opposition, just as what has happened with their counterparts in Turkey, realized that unity was the key. Nine parties formed a coalition tagged the Tonse (Together) Alliance. They fielded Lazarus Chakwera of the Malawi Congress Party (MCP) for presidency and Saulos Chilima (former vice-president) of the United Transformation Movement (UTM) as a running mate.

Poll results came as a shock to incumbent President Mutharika’s Democratic People’s Party (DPP). The opposition alliance won, 59% of the 4.4m vote cast.  With utmost about 40% of the votes, Mutharika could not establish any base for contesting against the verdict.  There are many lessons to pick from the Malawi experience. But the leading one is Unity combined with shelving selfishness among opposition party leaders.

If the Malawi Tonse Alliance opposition had taken this stand in the earlier election which was annulled by a strong and committed jury of judges, supported by strong civil society institutions, fresh elections would not have been held further straining the resources of a Least Developed African country. The total share of Tonse Alliance in the poll stood at 55.65% against DPP’s 38.57%. The game could have ended right there. So, to some extent, the opposition is sometimes responsible for political failures in their countries because of selfishness for power.

The Chief Justice is on record for having approached the Malawi anti-corruption agency complaining of bribery attempts on the judges dealing with the case. The police and the army, rather than crush any protest marches or resort to teargas instead turned out to guard peaceful demonstrators.  The Human Rights Defenders Coalition (HRDC) went to the court with strong cases of irregularities and without mincing words accused the electoral commission director of being partisan and biased.

This is something impossible to take place in Erdogan’s and AKP’s Turkey where everything related to democracy, the rule of law and respect for human rights no longer exists.

Those who have gone through Said Nursi’s discourses will remember him making a point that humankind’s problems are ignorance, poverty and disunity. This great thinker even went further to personify them as Lord Ignorance, Sir Poverty and Mr. Disunity.  Before the opposition in Turkey can think of addressing current problems facing their nation, they have first to address their unity question. The rest shall flow. Short of that, in a bundle, they will go down on their knees before the mighty divide-and-rule Erdogan. Enough is enough. People must not be taken for a ride. They must be in a strong position to hold their leaders accountable.