HomeHeadlineMARCOPOLO-II NOTES #3: An evening in the world’s most iconic chapel, a...
HeadlineExperts

MARCOPOLO-II NOTES #3: An evening in the world’s most iconic chapel, a “Muslim-mind” narrates, honoring Jesus. 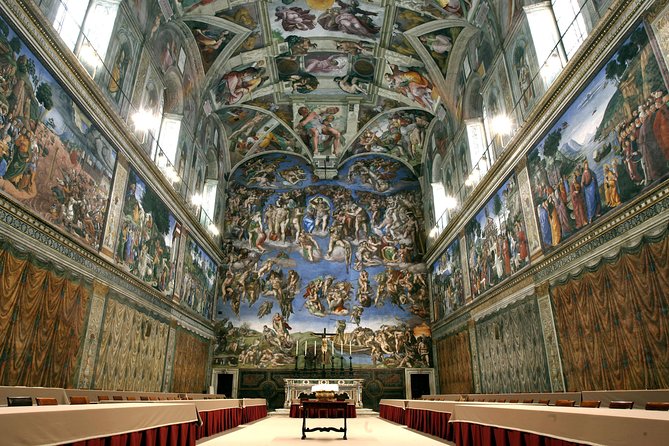 The road leading to the chapel is paved with hundreds of statues, paintings, and artistic representations of the Divine, showing the evolution of the concept of Man as he/she attempts to understand god, through the creations of magnificent works of art embalmed emblematically, from the time of the Greeks to the last days of Salvador Dali or Pablo Picasso.

But framed psycho-philosophically, what are my thoughts as a Muslim with transcultural philosophical leanings, as I was struck with awe and immersed in the profundity of feelings, walking in the massive hallway, entering almost every room filled with art compositions that represent the Christian faith, as I head towards to most important area of the day’s visit in Rome: The Sistine Chapel in The Vatican?

If there is a “mixed” tape of the life of the Muslim kampong/village child as he traverses the transcultural-philosophical journey of understanding Christianity and the teachings of Jesus of Nazareth, it should go like this:

“Reciting and memorizing the Quranic Chapter of Ali ‘Imran” or the Family of Imran. Stories of Maryam/Mary and the birth of Jesus. Beatles song “Let it Be”. Jalan Gereja or Church Street in Johor Bahru, Malaysia. Convent School. St. Joseph’s School, Johor Bahru. Nuns in Johor crossing the street. The movie The Exorcist with Lina Blair. A scene from The Godfather Part II: Sonny Corleone killed after saying the mantra ‘Hail Mary …”. Various church visits in Ohio. English Medieval Literature professor plays the Gregorian chant and Bach weekly, on vinyl. Conversations with pastors and professors of Christian thought. Sending students to visit churches, in my Comparative Religions class. Reading the Torah, the Bible, and the Quran, comparatively. Preparing lectures on the teachings of Jesus. Lecturing on the concept of Isa in the Quran. The concept of the Messiah. Watching American televangelists sell their wares. Studying L. Ron Hubbard’s ideology of the Church of Scientology. Watching a BBC documentary about Jesus’s lost years, traveling to India, and meeting the Buddha (Siddhartha Gautama) Watching a painful movie, Mel Gibson’s The Passion of the Christ. Teaching ideas of the Renaissance and the influence of Christianity. Teaching about the Reformation Period of 16th, Century Europe. Teaching about the 1000-year Crusade-Jihad War and the never-ending struggle for the conquest of Jerusalem. Attending numerous wakes and Catholic and Christian funerals. Columbia University Doctoral Graduation Ceremony at the Cathedral of St. John the Divine, New York City. A visit to the Vatican and the Sistine Chapel, Rome. “

The life of the mind, that child’s journey continues

Perspectives of the Individual. The Life of the Mind. Cross-cultural Perspectives. Social and Moral Philosophy. Religions of the World. Introduction to Religion. Western Civilization. The Middle East. Islamic Scriptures (in translation).

These are some of the courses I have taught in the areas of Philosophy, Anthropology, and Comparative Religions, giving me the basis for helping others see the multiplicities of views and how to see beyond the rites and rituals of belief systems, and how to evolve beyond systems thinking. If Karl Marx said we are all homo economicus, or essentially “economic beings” we too are “homo spiritus” and natural philosophers trapped in the linguistic game or the prison-house of language, borrowing the words of the American Marxist Frederic Jameson, of what to believe and the certitude of things, of being forced to believe in an Ultimate Truth, wherein truth is an evolving concept of the phenomenological nature of existence.

By the path, I took as an educator and an academic interested in ideas, and a passionate defender of intellectual freedom, I was ready to immerse myself in any experience provided by the spaces of religious knowledge, be they a Hindu temple, a Buddhist sangha, a Jewish synagogue, or the Muslim’s masjid, and now the Sistine Chapel in the Vatican, in Rome. Had I been in a country such as Malaysia, or in any conservative country run by Muslim theologians, I would not have been able to or allowed to practice what I profess: teaching cross-cultural exploration of a variety of religious experiences.

I share below a poem related to my philosophical inquiry.

A poem about nothing special

When I was born

no three wise men foretelling a greatness only Love can explain

no thunderstorms or tsunami greeting the world with calamity

only the Universe nodding its head

its long-flowing beard caught in a spinning wheel

why this birth, I asked?

where will I be, I lamented?

what shall be the end of the story? I framed my inquiry repeatedly

or Om– the first sound of the universe

like the flapping of the wings of a butterfly

of the inner ambiance in me?

what must I now conjure of my existence thus far

skillfully conjuring the signs and signifiers

of the greatness of Man in all his complexities

of this Divine Comedy he is plunged into?

as I see this samsara

An hour, staring up at the ceiling of the chapel

There I was in awe, reading the great images on the ceiling, on the frescoes, on the wall, savoring the details of the story of creation all in visual forms, my mind reeling and spiraling like a dazed butterfly in a storm, with interpretations, of memories of growing up in a Malay-Muslim village where the word “church” or “gereja” (from the Portuguese ‘igreja’), is a linguistic taboo that would strike fear in my heart, fear I could not fathom, of a closed door to a child’s any wish to understand what’s inside, what that means, and what people do or say, or chant or pray to in that place, of heaven and hell — all these came rushing into my consciousness, in that state of my mind, of fatigue weariness, and above all excitement.

But the “I” of me, with my mind’s I as well, scanning through the profound images, each frame telling a story, each figure evokes deeply religious emotions in me as well, again, in the mentally-drenched state of mind,” is not the “I” of the village child who grew up in a strict kampong/village Muslim environment. The “I” of the now who found deep reverie in the paintings and the drawing and the depicting of the sacred, by the masters of the Italian Renaissance, for a milieu made fertile in the great city of Florence, is no longer the “I” of the child in-between inquisitiveness and the fear of being punished by his Islamic or Quranic teacher for letting the child’s mind wander to some distant chapel thousands of miles from home. Although the child in that Malay village is blessed with a mother who bore the name of Mariam, or Mary, the mother of Isa or Yesus or Jesus.

That child was taught to revere Jesus as a prophet of Islam and that when the world is about to end and unfold and calamity destroys everything, Isa Al Masih or Jesus the Messiah will be the one appearing, to set things straight and to create the kingdom of God Isa, not Muhammad. As the child was also taught that Muhammad was a messenger who brought the teachings of Isa, Moses, David, Noah Abraham … reminding Humanity of the Oneness of God. Of Allah. The God. The One and Only God to be worshipped. Yes, Jesus was a prophet of Islam.

As if prophetic, as if metaphoric, as if ironic, the “I”-ness of the child as he becomes in the future the “I” of a transformed self, now his eyes wandering in that special place.

What do these mean? I share the poem below that resonates with what I feel about life’s journey.

A poem about self-exploration

“Aristotelian Poetics of yours”

Show me the mirror of Aristotelian poetics

and let me go back to the Time

when I could see the script and postscripts of Life

of those characters I was forced to meet

I was thrown into

endless it seems ‘unlike the structure of tragedy

show me more of the complexities of what you have created

because you are the Author of Things

show me all the rising actions my Life have been through

those micro fictions that weave like a sonnet of Shakespearean proportions

the Ramayana and the Mahabharata of your pulp fiction

show me all — the conflicts in the life I have lived

the life you have written

the life I have edited, revised, or even at times

show me then the climb — higher and higher

of the climax of it all

and I– still with the rock Camus wrote of, wondering where

I shall not go as I look above and below

in the nakedness of my soul

show me the way — you are the Author of all Things

I am one and becoming one with your authorship

this is the prose of life, you said

and I am to become an epic poem

of yet another catharsis of a creation

in which eros, thanatos, and hubris, and hamartia all is one

in that fountain of the peak I am now standing on

as I look down below

for a falling action

for a final destination

for an end to a story

— all these a plot of yours

I shall remain here and

you shall remain with your script

Finally, my dream came true: to view Michaelangelo’s work on the ceiling of the Sistine Chapel, in the Vatican, Rome. To view that segment of the painting called the “Act of Creation of Adam” I have seen hundreds of times in books, posters, walls, etc. And what was the visit about as I interrogated the “I” of a child vis-à-vis of the adult who has gone through a great deal of intellectual explorations in life?

The answer: it was on that day, no longer about being immersed in an intense feeling of a Muslim being in Catholicism’s most iconic and revered environment. It was about art and the human experience. About Michelangelo, Raphael, and masters of the Renaissance period. About human creativity and invention and personification of god, the practitioners of Christianity celebrated. My visit has now turned, like any other literary and humanities travel, historical-ethnographic, primarily. I affirm my belief that there are multiple ways to represent the Divine.