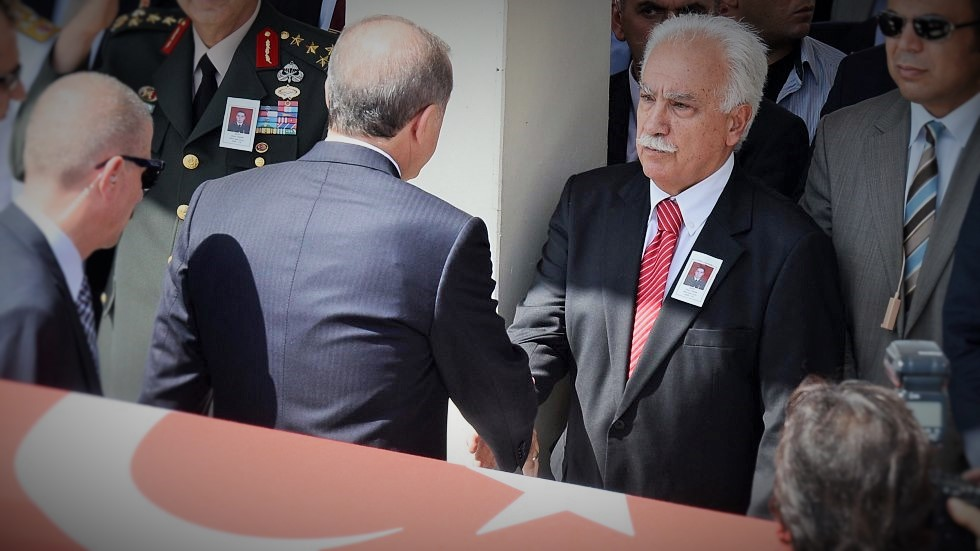 Turkey’s President Recep Tayyip Erdogan is continuing to lay his Islamic regime’s foundation stones as Islamic practices and rituals increasingly dominate public life in country that is at the crossroads of Asia and Europe.

The country’s main opposition party – the secular  Republican People’s Party (CHP) – appears to be helpless as the ruling party of Erdogan implements more anti-secular policies that had been put in place by Mustafa Kemal Ataturk, the founder of modern Turkey and in fact the CHP.

Strangely, Turkey’s Patriotic Party leader Dogu Perincek, who’s party only received 0.2 percent vote in the country’s last local government election in 2019, yet he acts like his party is a major coalition partner with the Erdogan’s ruling Justice and Development Party (AKP).

The Turkish regime closely monitors the mainstream media as well as social media to punish Erdogan’s critics, but Perincek fearlessly lambasts Erdogan in many platforms and at the same time he appears to have massive influence in directing Turkey’s foreign policy. Let’s analyze how Perincek plays role in Turkish politics since he was released from the jail in 2014.

Erdogan came to power in 2003. Turkish Liberals, Kurds, the Gulen Movement and the European Union supported his democratic reforms and economic development initiatives during  the early years of his rule.

The Gezi Park protests and civil unrest of May 2013, which were a response to an illegal construction project Erdogan wanted to start at historic Taksim Square, was the first major challenge to Erdogan’s government.

Erdogan feared losing control but came down harshly on the demonstrators by having  over five thousand people arrested all over Turkey. However, just as Erdogan was beginning to feel relief from crushing the Gezi demonstrations around the country, the 2013 corruption scandal that implicated his inner circle, including his son, erupted that December.

Erdogan realised that these corruption trials would end his rule and his Western allies would not save him from the legal troubles surrounding him at home. Just as he crushed the Gezi protesters, he firstly denied corruption allegations and then proceeded to purge all police officers, prosecutors, and judges who had carried out the anti-corruption operations that saw 52 people arrested on corruption charges – all of whom were connected to the AKP.

Erdogan needed a strong alliance that would protect him from Turkish judiciary and to this end he became an ally with Turkey’s pro-Russian Eurasianist Perincek group, in a bid to hunt mainly Gulenists  and silence  Kemalists – those supporting secular views of Mustafa Kemal Ataturk.

Michael Rubin, a resident scholar at the American Enterprise Institute, described Perincek as “a former Maoist turned ultranationalist who has backed Erdogan only so far as the Turkish president takes on their mutual enemies: Kurds, Gülenists and liberals.”

Perincek and his generals openly argue for Turkey’s withdrawal from NATO and they promote Ankara’s membership of the Shanghai Cooperation Organization.

Dogu Perincek is the most mysterious figure in Turkish politics. He was arrested in 2008 on charges of forming a secret armed organisation called Ergenekon to overthrow the government.

Perinçek was sentenced to aggravated life imprisonment on 5 August 2013, but surprisingly, was released on 10 March 2014. Since then he has aligned himself with Erdogan.

Perincek recently become “the shadow defense minister” due to his strong ties to high military officials.

According to Perincek’s Aydinlik Newspaper, Turkgenci was a hero military officer who urged the coup plotters to lay down their guns. And according to the publication he deployed  patriotic soldiers to fight against those attempting to carry out the coup during that fateful night.

However, a recent video of events on the night that has appeared on Twitter shows a very different story. On the night of 15 July 2016,  Turkgenci was the commander of the Istanbul’s biggest army division, the 52nd Tactical Armored Division. The soldiers who were deployed to Bosphorus Bridge and Istanbul Ataturk Airport were under the command of Turkgenci.

Eyewitnesses said Turkgenci came to Bosphorus Bridge hours before the coup attempt. He wore his steel vest which is not in the Army’s inventory and took his gun. The video is clearly shows that instead of ordering his soldiers to back their barracks, commander Turkgenci involved Turkish Airforce  Academy students’ transfer onto the bridge. The video released on the @1507analiz’s Twitter account shows a bus carrying Turkish Airforce Academy cadets to the Bosphorous Bridge by the special security branch, hours after the soldiers had already closed down the bridge.

The air force cadets did not want to get out of the bus and join the soldiers who had blocked the bridge. However, a special security detail, believed to be from Turkey’s National Intelligence Organisation (MIT), set the alight forcing the cadets out. The cadets were then beaten by this mysterious security officials, the moment they got down from the bus. Civilians tried to protect the cadets but MIT allegedly forced the cadets to move to the soldiers on the bridge. Yavuz Turkgenci is caught on camera as he appears at all stages of the special team’s actions of herding the cadets onto the bridge.

Another strange coincidence is that in Ankara, the only military tank which was involved in the fail coup, was under commander Metin Gurak, who like Turkgenci was later was promoted to the full general post.

Erdogan is an extremely pragmatic leader as he has at one time or another been an ally of almost all of Turkeys social and political groups in the country and abroad during his 18 long years in power. He started Armenian, Kurdish peace initiatives, he received US Jewish Award, he deals with Russia and USA together, appeared in BRICS in South Africa. He renovated many churches, sat together with Turkish Orthodox Christian leaders and Pope Francis was the first house guest in Erdogan’s palace.

Contrary to his pragmatist past, why Erdogan is increasing tension with the West? Such issues as resisting Donald Trump’s several call to release Pastor Bronson and insisting  buying Russian S-400 advance missiles despite being exclusion from American F-35 jets program come to mind.

It shows that Erdogan is not necessarily steering the country alone and the direction that it has taken in recent years indicate that the hand of Perincek may well be involved, especially considering the

Erdogan, on his own, was not in a position to purge almost 50 army officers daily since the July 2016 coup attempt. Is this the Ergenekon, the Turkish ultra-nationalist establishment currently taking revenge on Gulenists and other voices who questions the status quo in the country? Is this the secret hand of Perincek? Time will tell.