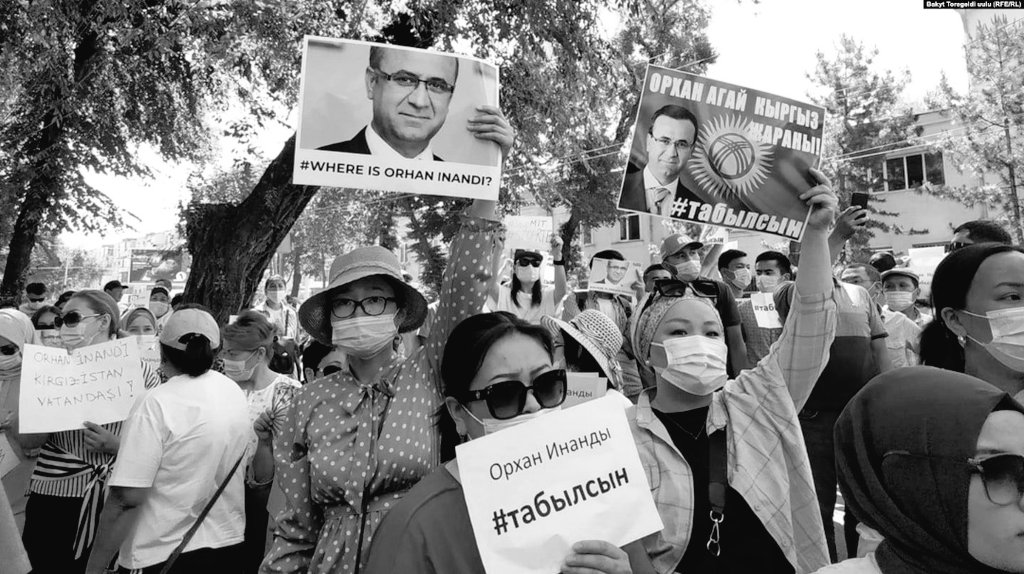 Having observed the year 2020 as anno terribilis et horribilis (terrible and horrible) for Turkey, I opined that if the country needed anything to take into the Year 2021, it was a global prayer against abductions.

Five months down the time lane, Turkey is at it again. This time round it is ‘Mission Nairobi’ in Kenya, in sub-Saharan Africa, more than 4,600 km from Ankara. On its heels is ‘Mission Kyrgyzstan’ landlocked Central Asia country, more than 3,350 km from Turkey by air and 5,139km by road. The victims are the same; those linked with the Gulen Movement and teachers.

Both incidents confirm the world is in dire need to end what has, over years, turned into Turkey’s or rather Erdogan’s flagrant transnational repression. The Nairobi operation involves Fethullah Gulen’s nephew Selahattin and Kyrgyzstan Orhan Inandi for whom Sapat Schools graduates have offered $1 million for whoever finds him. Erdogan’s dirty abductions game must be stopped.

Without mincing words, President Recep Tayyip Erdogan is the man at the centre. He is the chairman of the National Intelligence Coordination Council (MİKK) which is the main strategy-making body for MİT’s terrorizing moves outside Turkey.

According to the Advocates of Silenced Turkey (AST), Erdogan regime’s abduction operations abroad have in some cases been in cooperation with the victim hosting countries, while in others, the Turkish operational units simply utilized underhanded methods, drawing strong reactions.

A typical example is when an attempt was made to abduct a Turkish teacher in Mongolia. Deputy Foreign Minister Battsetseg Batmunkh denounced the attempt calling it “an unacceptable act of violation of Mongolia’s sovereignty and independence…” As one would have expected, the Turkish embassy in Ulaanbaatar rejected any knowledge or involvement.

To a relatively informed common man in Tanzania, a mention of Kosovo rings memory of inconceivable level of trouble on the ground. Almost intolerable. An MIT Kosovo mission ended in the kidnap of five teachers and a medical doctor affiliated with the Gulen movement, immediately after which Prime Minister Ramush Haradinaj fired interior minister and intelligence chief saying the victims “were not deported but …stolen.” Subsequently, the Foreign Affairs Ministry issued a stern warning statement declaring “the arrest and deportation of the Turkish citizens with a regular residence permit … is … in direct contradiction to international norms.”

Insatiable, over self-confident and uncompromising Erdogan hit back saying Kosovo’s Prime Minister Haradinaj would “pay” for what he did.  Commenting on this unbridled disparagement of the Kosovar Prime minister, prominent Kosovar journalist Enver Robelli told Al-Monitor: “People are irritated that Erdogan attacks the prime minister. Most (local) media (report that) Erdogan behaves as if he were the king of Kosovo.”

In Moldova an ex-Secret Services Director on retirement received a suspended sentence and payment of fines for the expulsion of seven Turkish teachers linked to the Gulen movement. The teachers, five of whom had applied to the European Court for Human Rights (ECHR), were victims of a joint operation by the Turkish and Moldovan intelligence agencies in September 2018. They were put on a charter flight to Turkey and are currently jailed there.

In September 2020, the Advocates of Silenced Turkey (AST) issued an extensive 152-page report titled “Erdogan’s Long Arms: Abductions in Turkey and Abroad” on operations conducted brutally by Turkish authorities, detailing 135 cases. To welcome 2021, Turkey was still busy in the act with no sign of abating.

The non-ending abductions and other congruent ill-treatment of the people at the hand of AKP and President Erdogan have a deeper root.  On 21 July 2016, within a week after the orchestrated coup attempt, Turkey announced its intention to derogate from the Convention for the Protection of Human Rights and Fundamental Freedoms (European Convention on Human Rights) in application of Article 15 of the Convention.

As of now, Turkey has parted ways with practically every international protocol that stands for human rights – even the ones embedded in the national constitution.

At a Ramadhan fast break dinner, Iftar, President Erdogan took chance to call on the people to “teach a lesson” to persons who had been released in the investigations into the Hizmet Movement. He specified that they should not escape punishment so easily, even if they were not criminals. That is definitely one of the worst messages to come from a Muslim Head of State during the holy fasting month of Ramadhan — punishing anybody even if that person is not a criminal. That demonstrates the spate of hate the Erdogan regime harbours against Gulen and members of the Hizmet Movement.

This sets conducive environment for violation of all human rights at home and elsewhere in respect of which the world should not turn a blind eye or deaf ear. It is here that one should appreciate the good conscience of the Greek Court in refusing to extradite Turkish military officers to a country considered to face the threat of restoration of death penalty, where there is also evidence of degrading and inhuman treatment of political dissidents and, where there is no fair trial.

The democracy path of Turkey is not only narrowing; it is also being spiked. The rule of law is gone.  Freedoms are gone.  President Erdogan’s popularity and that of the ruling AKP party have waned. According to Arab News, latest survey from Istanbul Economics showed that  Yavas and Imamoglu are now performing better than Erdogan in polls.

The survey conducted in 12 cities also reveals that ppopular support for the ruling Justice and Development Party (AKP) and its nationalist partner MHP was down to 45% with the opposition standing at 55%.

It is thus no wonder that in these circumstances to hear of President Erdogan saying he does not see any future for Turkey in the multi-party politics. Slowly, he is seeing the political system turning into a story of the sour grapes. But the fault is of his own making.

He is sort of filling diesel fuel in a petrol engine vehicle tank and blaming the driver or manufacturer. Erdogan no longer agrees with the democracy ignition system. He has since turned into a dictator.  The world must make him pay for that.

There is no democratic government under the sun that runs on the system of internal and cross-border abductions, corruption, paralyzed judiciary and media.