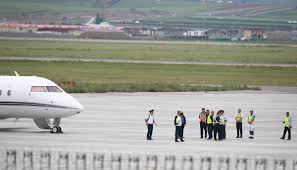 In recent weeks, Turkey’s intelligence agency has conducted operations abroad against associates of US-based preacher Fethullah Gulen — who Ankara says was behind a 2016 failed coup.

As many as five men grabbed Veysel Akcay from outside his home in Mongolia’s capital Ulaanbaatar Friday morning and threw him into a minibus, according to friends and eyewitnesses.

The 50-year-old is director of a school in Mongolia that is alleged to be associated with Gulen, although teachers there denied the connection in response to questions by AFP.

When he failed to show up for work, concerned family and friends notified the police.

Meanwhile, Akcay’s abductors had taken him to Genghis Khan international airport, where a small passenger jet landed around 1.00 pm (0500 GMT).

The plane — with call sign TT4010 — is operated by the Turkish Airforce, according to data on flight tracking site flightradar24.com.

It was the beginning of a more than eight-hour standoff between the captors and Mongolian authorities, who refused to allow the plane to leave the runway.

As authorities summoned Turkish officials from their embassy in Mongolia, parliamentarians and protestors clutching signs demanding Akcay’s release gathered at the airport.

As the standoff dragged on, Mongolian Vice Minister of Foreign Affairs Battsetseg Batmunkh warned Turkish embassy officials that any attempt to abduct a person from Mongolia’s territory would constitute “a serious violation of Mongolia’s independence and sovereignty”.

But officials were not convinced: “We are an independent nation. Do you think anyone can do abductions in our country?” parliamentarian Baasankhuu Oktaybri wrote on Twitter.

The plane took off at 9:25 pm. Akcay was not on it, a Mongolian transportation official said on Twitter.

Gulen’s movement built up significant influence in Turkey and overseas, particularly in Central Asia, Africa and the Balkans, especially via its education network.

Ankara has outlawed the movement as a terror organisation but followers insist they promote peace and moderate Islam.

Turkey has carried out a series of overseas operations against suspected members of the movement in places such as Kosovo, Gabon and more recently Ukraine.

Last week a Turkish blogger accused of links to Gulen was deported from Ukraine as part of an operation by MIT while another individual was detained in Azerbaijan recently and sent back to Turkey.

In Turkey over 77,000 people were arrested over alleged links to the movement during a two-year state of emergency imposed after the coup bid in a crackdown criticised by Ankara’s Western allies.

In a press release by AST(Advocates of Silenced Turkey) a New York based Human Rights Organization revealed the details of the incident called Mongolian Government to pay attention for potential attempts of the Turkish regime.

‘We write you today with great concern over the human rights of Veyse Akcay. Veysel Akçay, the General Director of the schools affiliated with the Gülen movement in Mongolia who has lived in Mongolia for over 24 years, was abducted by Turkey’s notorious National Intelligence Organization (MIT) Friday morning (7/27/18) in front of his house in the capital city Ulan Bator.

It was reported that a private jet plane is waiting at the Ulan Bator Airport to transfer Akcay to Turkey. Akçay, who has worked at the educational institutions in Mongolia for 24 years, is reportedly one of a few Turkish nationals possessing the Mongolian Friendship Medal bestowed by Mongolian State.

New York-based Journalists and Writers Foundation (JWF) said that on Friday, at 9:00 am (local time in Mongolia) Veysel Akçay left his home to his workplace at the Empathy Worldwide Educational Institution. According to eyewitnesses (and CCTV recordings), he was stopped by a minibus in front of his house and abducted by people working on behalf of Turkey’s National Intelligence Organization (MİT).

As it is known Turkish government has been taking strict measures to silence dissidents from various ideologies. Gulen/Hizmet Movement has been the main target of the government, which is a faith-based group of people engaging in different voluntary activities such as education, business and health. Alleged supporters of the Movement in Turkey have been dealing with arrest, imprisonment, torture, inhuman and degrading treatment, confiscation and passport seizure. There are many examples of abductions and physical violence incidents in several countries like Sudan, Kazakhstan, Pakistan, Georgia, Myanmar, Kosovo and Malaysia.

Around 12 AM Eastern Time (5-6 hours after abduction), Meryem Akcay announced that her husband Veysel Akcay has returned home safely. Resistance from citizens and politicians has prevented the illegal transfer to Turkey.

We would like to note out few points that the Mongolian government need to consider in its efforts to resist illegal efforts of the Turkish regime:

1.Turkish regime planned to kidnap Mr. Fethullah Gulen from the United States by offering $15 million to former national security adviser Michael Flynn. The Turkish regime has also offered bribes to other people in return for illegal favors. We urge Mongolian government to be conscientious with bribes offered to Mongolian officials.

3.Even if the Mongolian government shows resistance against illegal efforts of the Turkish regime, the Turkish regime can bribe and work with critical people can offer the requests despite the government’s stance. Kosovo Prime Minister Ramush Haradinaj sacked two top security chiefs for failing to inform him about the arrest and deportation of six Turkish dissidents.

4.Turkish government keeps 20 American citizens in jail as political hostage to use them as leverage in negotiations. One of them is pastor Brunson who has lived in Turkey for more than 20 years. Turkish government accuses him for terror. President Trump tweeted on July 26,2018,”The United States will impose large sanctions on Turkey for their long time detainment of Pastor Andrew Brunson, a great Christian, family man and wonderful human being. He is suffering greatly. This innocent man of faith should be released immediately!” Erdogan had said last year, “‘Give us the pastor back,’ they say. You have one pastor as well. Give him to us [referring to Gulen] and then we will try him [Brunson] and give him to you.” The Turkish regime might use similar non-ethical plots against the Mongolian government to gain leverage to request Gulen sympathizers from the Mongolian government.

We thank Mongolian government and officials for resisting the illegal transfer of Veysel Akcay, showing careful attention to the situation and standing firmly for the rule of law. We urge the Mongolian government to investigate Veysel Akcay’s case, open a legal case against MIT officials and other people who engaged in this illegal act, and ensure the safety of Gulen sympathizers in Mongolia.’