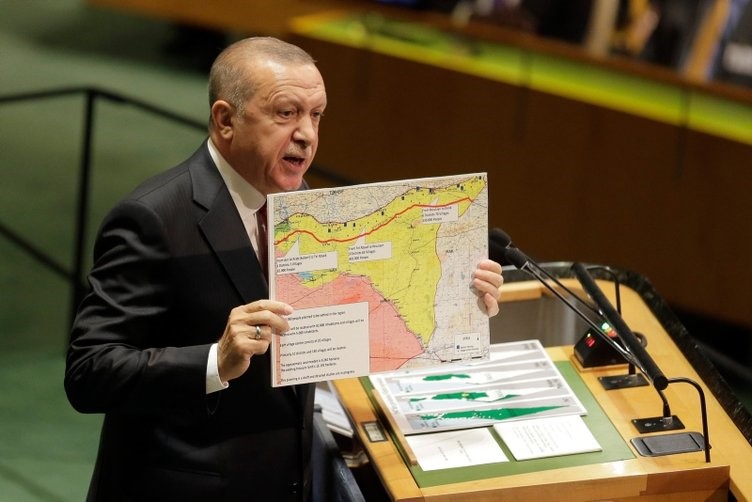 Turkey’s President Recep Tayyip Erdogan is no longer trying to play mediation role between Iran and the West or Kashmir-India. Instead, what he is aggressively pursuing is war in Syria and Libya.

Erdogan has continued to pour troops into Syria’s rebel-held stronghold of Idlib since last week, even though Russian-backed Syrian regime forces killed dozens of Turkish soldiers there in the past fortnight.

Neither Kurdish military groups in Syria, the Assad regime or Russian forces in the region are threatening Turkey, so why is Erdogan continuing to up the ante by pouring soldiers into Syria?

Erdogan has been supporting jihadist groups since the Syrian conflict erupted in 2011.

Can it be that Can Dundar, the former editor in chief of Cumhuriyet, one of Turkey’s largest circulating mass dailies, who is now living in exile, revealed the truth about Turkish government’s aims when he exposed the secret arms transfers to Syria?

Back in 2014 Turkish gendarmerie stopped a truck, understood to belong to the Turkish intelligence service (MIT), near the Syrian border in 2014. The members of two state security institutions pulled guns on each other as the gendarmerie found weapons and ammunition beneath the camouflage composed of medicines boxes in the truck.

Despite this neither judiciary nor gendarmerie has been able to stop Erdogan sending guns to the  jihadists.

Washington reduced its support for Free Syrian Army (FSA), which was fighting the forces Syria’s President Bashar AL-Assad. Turkey, however, still hopes to topple Al-Assad despite this and other groups failure to topple al-Assad. In fact the FSA position has grown increasingly precarious as it gets squeezed into an ever smaller area in Idlib.

Many Turkish political analysts make the point that Erdogan needs a war in Syria to stroke nationalism at home to enable him to continue his crack down on critics. And with that being achieved he can continue his effective one-man rule that has been in place ever since he persuaded the Turkish voters to agree in a 2017 referendum to an executive presidential system.

Is Erdogan falling into the “Saddam trap”?

U.S. special envoy for Syria Jeffrey James who arrived Turkey on 11th February, used the term “martyr” for Turkish soldiers who lost their lives in Idlib and shared his condolences in Turkish language.

He said the U.S. supports Turkey’s “legitimate interests” in Syria’s last rebel bastion of Idlib and as a NATO ally, Washington was looking to find out how to help Ankara as “the people of Turkey cannot deal with this disaster alone”.

Erdogan’s Justice and Development Party (AKP) has been in a political alliance with Bahceli and his Nationalist Movement Party (MHP) for the last several years.

Nationalists are the main supporters in Turkey of Erdogan’s war in Syria.
Despite the MHP’s support and that voiced by the U.S.’s Jeffrey, success in the Syrian war for Erdogan is almost impossible as neither USA or NATO members recognize Erdogan as trustworthy partner.

The Turkish leader has been trying to build strong relations with Putin but this has not been successful because Ankara and Moskow support different military groups in many regions.

As Turkey couldn’t secure either Russian or Nato support, Erdogan spokesmen Ibrahim Kalin made a statement that Ankara will also hunt radical groups in Idlib if these groups act out of control.

It seems that U.S. may be forcing Turkey to fight against the Islamic State (ISIS) as Jeffrey mentioned that Turkey had suffered massively from ISIS and the terrorist organization is still a big threat for Turkey.

Erdogan’s main aganda to support jihadist groups is to control Damascus and to declare himself as leader of Muslim world as well as use Syrian fighters such as the FSA against Kurdish armed groups in Syria.

The failed coup of July 2016 helped Erdogan to force the Turkish army to enter Syria as Erdogan fired more than half of the generals from Turkish Armed Forces (TSK).

It is interesting that Jeffrey said in his interview at Turkish NTV that U.S. have common geostrategic goals in Syria and Libya.

Turkish political commentators say that Turkey should stand strong against Russia but also should not get carried away by America’s agenda in Syria.

The ruling AKP and the Turkish public are highly critical of the U.S., especially since  General Kenneth McKenzie of the U. S.’s Central Commands met with the top commander of the People’s Protection Units (YPG), the organization known as Syrian affiliate of the PKK. Turkey has been fighting against PKK since 1983 in a conflict that has cost some 40,000 lives.

The economic situation in Turkey means that Erdogan remains very vulnerable to Turkish ultra-nationalists’ threat in the country and Russian threat just outside of the country.

Saddam’s uncalculated adventure cost him his life and led to a Kurdish autonomus region flourishing in his country – –  something he was totally against.

Erdogan’s Syria folly has already left millions of Syriand dead, and the conflict has changed the demographics of Turkey and many Europian cities as millions migrants arrives.

But now Erdogan finds himself on the opposite side, facing a potentially deadly confrontation with Russia in Syria and needs U.S. support. And there is no guarantee he will get it, despite Jeffrey’s supportive comments.

It will not be a surprise if an autonomous Kurdish region emerges in Syria as happened in Iraq.

A weakened Erdogan might find himself facing the PKK and YPG in a much stronger position, with Russian and Iranian backing.

That conflict also appears to be replicating itself in Libya, where Erdogan finds himself on the opposite side of the Russians.

Erdogan controls almost 40,000 jihadists in Syria, some of whom have reportedly been encouraged to go and fight Turkey’s battles in Libya where Erdogan has signed a military agreement with Libya’s government of National Accord.

Again, any support from Nato and the U.S. is highly unlikely.

That being said, it is in Syria, not Libya, where the greatest threat to Erdogan lies. And rather than extracting himself, he seems to be getting Turkey more involved in an adventure that does not bode well for it at all.