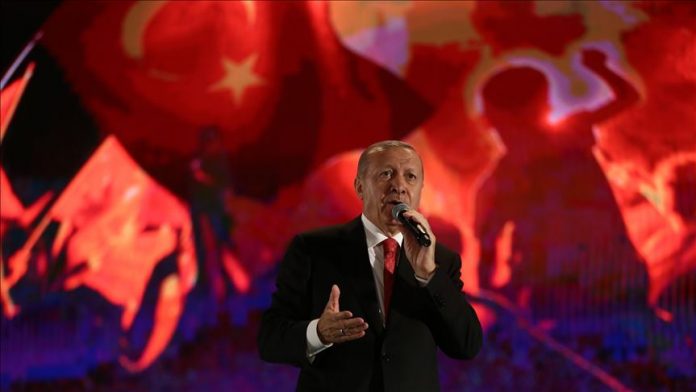 The right to form and express one’s opinion is indisputable. But, to borrow a line from George Orwell’s Animal Farm, some opinions, those related to ethics or moral behavior in particular, can be more unpalatable or scandalous than others. An example of such bad-to-taste opinion would be to nominate Lucifer, the King of Hell, for sainthood.

This is exactly what came to my mind when I read a headline: “Erdogan nominated for Nobel Peace Prize.”  A report from the Russian near=Centenarian Soviet News Agency, TASS, quoted the Turkish Grand National Assembly Speaker, Mustafa Sentop, as saying: “I have nominated President Erdogan for the Nobel Peace Prize for his efforts in the name of peace between Russia and Ukraine. This is my own appeal. There will also be appeals from other countries.”

With due respect to Speaker Sentop opinion and irrespective of whether there would be more appeals and, even condemnations for that matter, the opinion sent me back to our school of journalism, where we had to take ethics subject as well. For the sake of this write up, I feel like inviting you to accompany be back to the school lecture rooms for a short dossier.

“As a field of intellectual inquiry, moral philosophy also is related to fields of moral psychology, descriptive ethics and value theory. Three major areas of study within ethics recognized today are Meta-ethics concerning the theoretical meaning and reference of moral propositions and how their truth values (if any) can be determined. Normative ethics concerning the practical means of determining a moral course of action. Applied ethics concerned with what a person is obligated or permitted to do in a specific situation or a particular domain of action.”

After this dossier, I feel like visiting Turkey and beyond while resolving Nobel Peace Prize nominee of Speaker Mustafa Sentop, President Recep Tayyip Erdogan’s question of human morality within the concept framework of good and evil, right and wrong, virtue and vice, justice and crime. I have a set of questions to put to the Speaker.

Q1. Hon. Speaker, since the 2016 controversial coup which we now know was faked, about 150 public employees, among them thousands of university professors, judges and prosecutors deemed not loyal to President Erdogan, have been sacked, negatively impacting them, their families and, of course Turkey in the final analysis. Is this peace?

Q2. Hon. Speaker, nearly 200 media outlets have been shut. More than 90% of the remaining have been ‘Erdoganised’ or placed in the hands of his supporters.  Turkey is a leader in jailing journalists. Which peace is this?

Q3. Hon. Speaker, on the heels of a presidential system, Turkey has seen the crumbling of the pillars of democracy — the parliament, the judiciary, the government. President Erdogan is the investigator, prosecutor and judge. It is on record that he has signed into law decrees that are more than twice those which have gone through the hands of designated law enacting process. Which constituent of peace building is this?

Q4. Hon. Speaker, President Erdogan has vowed to make life impossible for those he deems to have links with the Gulen Movement anywhere on the face of the earth. Through the Turkish intelligence organization (MiT) he has followed them across borders and abducted some back to Turkey. Which peace segment is this?

Q5. Hon. Speaker, there is no doubt that the Erdogan regime is obliterating independent civil society. What is your take on the current flow of events revolving around the court refusal to release the chairperson of the Turkish Medical Association facing prison sentence for demanding a probe into the army’s alleged use of chemical weapons against Kurdish fighters in Iraq?  Which peace portion is this?

Q6. Hon. Speaker, what is left of tolerance for intellectual diversity in Turkey with the closure of some universities, government-appointed rectors and even the burning of textbooks because they are seen as products of Gulen-linked brains? Yet you nominate President Erdogan for the Nobel Peace Prize?

Q7.  From the perspective of building peace, what is the status of cultural autonomy for Kurds and other minorities in Erdogan’s Turkey?

Q8. Hon. Speaker, President Erdogan pulled Turkey out of the global convention for the protection of women’s rights despite bearing the tag of Istanbul, leading to trashing the rights of about half of the country’s population. On which peace course has this move put Turkey in terms of defense for women? What do the tears of the Saturday Mothers stand for in support of your quest for a Nobel Peace Prize for Erdogan?

Q9. Hon. Speaker, if anything, Turkey’s cooperation with international non-governmental networks implementing human rights standards to protect the rule of law and protect civil society is at its lowest. Erdogan’s Turkey is not in the good books of the Amnesty International (AI), Transparency International (TI), the European Court for Human Rights (ECtHR), Human Rights Watch, to mention a few. Is this a good peace-building climate to warrant your nomination of President Erdogan for the designated Nobel prize?

Q 10. Hon. Speaker, as Turkey literally sets a foot on the countdown to the forthcoming presidential and parliamentary elections, one can see a vivid Erdogan clamp down on the opposition.  Don’t you feel ashamed in the least to make such an opinion when the rest of the world is watching what is taking place on stage? From which tree did you pluck this courage?

Q. 11. Finally, Speaker Mustafa Sentop, as you said, you have nominated President Erdogan for the Nobel Peace Prize for his efforts in the name of peace between Russia and Ukraine …” Fine. Don’t you agree that peace, like love, should start at home?  Could your opinion have been more influenced by the stomach because of the Black Sea grain corridor effect than the brain, considering the tortures involved in the Russia-Ukraine war or what is taking place on the ground in Turkey with arbitrary arrests, framed-up charges, strip searches, untold tortures?

Stephen Kinzer former New York Times foreign correspondent and senior fellow at the Watson Institute for National and International Affairs at Brown University, Rhode Island, once expressed Erdogan as a “major star in this galaxy of malodorous autocrats.” Is this the man to nominate for the Nobel Peace Prize Speaker Mustafa Sentop? The speaker definitely knows much better as a government and ruling Justice and Development Party AKP insider. That, if there is anything that does not concern the Erdogan regime, it is anything good, right, just, and virtuous. To go by another insider by the name of mafia boss Peker, the Erdogan government is all about evil, wrongdoing, vice and crime.