Now we know: It was planned-to-fail coup 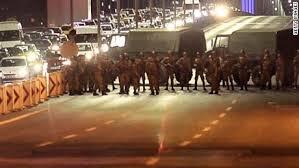 At long last, the ‘quadratic’ sort of political equation for the highly intriguing July 15 2016 failed Turkish attempted coup has been solved.  Five years down the time lane, it is revealed to be a planned-to-fail coup.

Truth, in whatever dimension, is non-negotiable.  About five centuries BC (Before Christ), Greek Philosopher Socrates said: “An unexamined life is not worth living.” During the fateful trial on the way to being crucified, the Christ asked Pontius Pilate: “What is the truth”. On a light note, there is a joke of a child peeping through a bathroom door key hole and running fast to his mother to break the news: “Now I know. I’m like dad.

What is the truth about the orchestrated Turkey coup that has come with untold bad experiences for the people and the rest of the world? Who is its author?

I have always argued that because it is difficult to hide the truth about anything, the world would one day know what exactly happened until there is now what we call the July 15 2016 failed attempted coup in Turkey. The coup had many and divergent versions.

I felt I would rather reason with Dr. Omer Atilla Ergi on what he calls “Turkey’s July 15 conundrum” in the latest Truth Magazine publication dedicated to the fifth anniversary of the coup.

Scenario One: From the perspective of history, the about one –century-old Turkey Republic has been through a series of military coups.

Scenario Two: Here we have the second strongest NATO member in military terms undergoing a coup conducted by 18 to 21-year-old cadet and private soldiers minus the involvement of any high ranking officer. The army strength is about one million with generals.

Scenario Three: The military team is being sent to capture the President Recep Tayyip Erdogan hours after his departure. Strangely, the mission contacts a taxi driver on the direction of the hotel in which the president was staying. A mission without destination?

Scenario Four: The president under threat takes an official flight when the Air Force is the one allegedly coordinating a coup.  What a security discrepancy? Or was he in the know of what was taking place?

Scenario Six: Hundreds of civilians from Sincan commuting on unofficial train trip being taken to Ankara to fight against plotters.

Scenario Eight: Despite the governor’s confirmation of the operation, police headquarters after the coup ‘report’ 107,000 arms missing from the inventory.

Scenario Nine: Religious Affairs President Mehmet Gormez gives instructions to mosque Imams in key cities to invite civilians to the streets from the minarets with a call of sala.

Scenario Eleven: Key figures in the event refused to testify in a court of law. They were right. How could they take oath for giving false testimony?

Scenario Twelve: The two generals who were assassinated on the night of the coup were both known Kemalists.

Scenario Thirteen: Dr. Erig concludes: There was no coup attempt but a carefully planned intelligence operation. It was a planned-to-fail coup. So why bring in the Gulen movement?

To get a sort of from-the-horse’s-mouth analysis, former intelligence (MiT) head, Prof. Mahirk Aynak said: “In order to understand who the perpetrators are it is necessary to ask the question: Who benefits the most from the event?”  That is, between Erdogan, AKP and allies on one side and Gulen and Hizmet members on the other.

Institutions established by the Gulen movement were usurped and given to Erdogan relatives. This involved 15 universities, 49 hospitals 164 foundations 300 schools and educational institutions. This translated into 35,000 teachers losing jobs immediately. A total of 31,500 police officers, 7,000 doctors, 6,000 academicians, 1,524 judges and prosecutors,600 lawyers mostly women were purged.

All in all, 622,646 people have been subjected to investigations, 301932 detained, 96000 others jailed due to links with the Gulen movement and the failed coup.  Currently 25,467 people are in prisons while more than 130,00 civil servants have been sacked.

Further proof of the coup ownership is traceable in parliament. In July 2017 parliamentary inquiry committee into the matter handed a report to the speaker, whose office now claims to have never received it.  However, very reliable information says that Turkish authorities have not made it public following legal advice warning that it could help members of Gulen movement compensation claims

The then vice-chair Selkuk  Ozdag , former lawmaker and ex-member of ruling party now vice-chair of opposition Future Party(GP) warned:  “Allegations, facts and events would cause you a lot of trouble in the future…would put Turkey in a tight  spot in the international arena  and could lead to the government having to pay a lot of compensation…”

In a 2019 response to a written question, deputy parliament speaker said the speaker’s office had not received the report and that an earlier one prepared during the 26th legislative session was not published as it was not finalized within the session.  What a lame excuse, if not a lie!

Further proof lies in the fact that even events that never happened on the day of the failed coup were recorded in the report of the public prosecutor.

As of now, lawyers have filed criminal complaints against seven people, including President Erdogan and his son-in- law, Berat Albayrak, over a mob boss claims about distribution of AK-47arms to civilians on the night of the coup.

Two days to the anniversary, Defense Minister Hulusi Akar, who was the country’s Chief of General Staff revealed that a total of 23,364 personnel have been expelled from the military since the coup attempt. He said this when addressing the “Fifth International July 15th Symposium held by the July 15 Foundation at Marmara University.

At the root of the Erdogan-Gulen dividing line is not the coup that was. It is the December 17-25 2013 corruption investigations implicating the then Prime Minister (now President) Erdogan, his family members and inner circle.

Gulen has categorically stated: “If I am found guilty I will voluntarily return to turkey for a legal trial.” But Erdogan, with reasons we now know, is unwilling to allow the establishment of an independent commission of inquiry. To him an unexamined life is worth living. He is ready to create hell on earth for dissidents at home and abroad. International laws and protocols no longer matter so much.

The question is for how long shall the people of Turkey live under Erdogan repressions? And is it fair for the rest of the world to ignore or keep quiet about it?