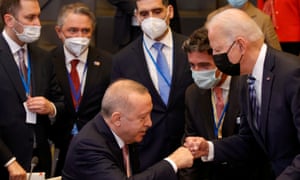 On June 14, 2021, President Joseph Biden and President Recep Tayyip Erdoğan held a “closed-door” meeting on the sidelines of the North Atlantic Treaty Organisation (NATO) Summit in Brussels. This was the first face-to-face meeting between Erdoğan and Biden since the latter’s inauguration in January 2021.

The bilateral relations between the US and Turkey, both members of NATO and traditional partners, have deteriorated over the years. The first signs of the wedge emerged over growing concerns in the US and European capitals over the authoritarian turn in the Justice and Development Party (AKP) government in Turkey since 2012-13. The handling of the 2013 Gezi Park protests and the crackdown on media and civil society after the 2016 failed coup strained the relations. Policy disagreements over the Syrian conflict and the US support for Syrian Democratic Forces (SDF) in the fight against the Islamic State of Iraq and Syria (ISIS), together with US concerns over Turkey’s decision to buy S-400 missile defence system from Russia, created serious differences between the two sides.

Other outstanding issues included Washington’s refusal to extradite Fethullah Gülen, the Pennsylvania-based Islamic scholar and preacher, wanted in Turkey for allegedly inciting the 2016 coup and concerns in the US on serious human rights violations, the crackdown on media and civil society and stifling of the political opposition in Turkey.

Nonetheless, during the Donald Trump administration, the contentious issues were managed through high-level bilateral meetings. Though they were unable to resolve outstanding issues, the Trump-Erdoğan dialogues kept the relations from derailing further. Erdoğan had hoped for developing a similar working relation with President Biden and had expressed such sentiments while congratulating Biden upon his election.1 In one of his televised statements before the meeting, the Turkish president had predicted that the June 14 meeting will be a “harbinger of a new era” in US-Turkey relations.2

Biden, however, had different views on Turkey, and a clear signal came on April 24, when he characterised the 1915 killings of Armenians at the hands of Ottoman soldiers and mercenaries as a “genocide” despite Turkish warnings and protests.3

Reportedly, among the issues that came up for discussion during the 45-minute meeting between Biden and Erdoğan were the US concerns over the deployment of the Russian S-400 surface-to-air missile defence system by Turkey and the Turkish opposition to continued US support for the SDF in northern Syria.4

For the US, the problem with regard to the deployment of S-400 is its potential facilitation of access to Russian security experts to the NATO and the US military equipment in Turkey. In July 2019, after Ankara received the first consignment of the S-400 missile defence system, the US had removed Turkey from its F-35 fighter jet programme. At the time, a White House statement had said, “The F-35 cannot coexist with a Russian intelligence collection platform that will be used to learn about its advanced capabilities.”5

Before the June 14 meeting, there were speculations in the Turkish media of a likely breakthrough in resolving the S-400 issue. It was reported that Erdoğan might offer to “deploy the S-400s under US control at the Incirlik air base in southern Turkey, without any Russian involvement in their operation and maintenance.”6 However, going by the follow-up briefing about the meeting to the media, no breakthrough came about on the issue.

Jack Sullivan, Biden’s National Security Advisor (NSA), when asked about the discussion during the Biden-Erdoğan meeting, underlined that the S-400 issue was discussed but no resolution could be achieved. He said, “There was a commitment to continue the dialogue on the S-400.  And the two teams will be following up on that coming out of the meeting.”7 During a press conference after the meeting, Erdoğan too admitted that there was no resolution on the issue. He said, “On the issue of S-400s, I told (Biden) the same thing I had in the past,” and “I raised the issue of F-35s.”8

From Ankara’s viewpoint, the most contentious issue driving the wedge in bilateral relations with the US is the continuation of US support to the SDF in northern Syria. Turkey considers the SDF as a terrorist organisation because it is dominated by the People’s Protection Units (YPG), a Syrian-Kurdish militia affiliated with Turkey’s outlawed Kurdistan Workers’ Party (PKK). For Turkey, the strengthening of SDF-YPG influence in northern Syria across the border from its Kurdish insurgency afflicted southeast region poses a security threat to Turkey. Since early 2019, Turkish armed forces have undertaken a series of military operations in northern Syria to establish a “safe zone” near the Turkey-Syria border.9

During the post-meeting press conference, Erdoğan said that he raised the issue of US support to the SDF and the security threat the “terrorist” organisation poses to Turkey with Biden. He said, “There should be no double standards in anti-terror efforts and it should be known that one terrorist group cannot be defeated with another” referring to the US claims that the SDF is inevitable to defeating the ISIS in Syria.10

While these two issues remained unresolved, an agreement was arrived at the meeting on a potential Turkish mission to secure the Kabul international airport after the planned withdrawal of US forces in September 2021. Sullivan said that Biden and Erdoğan agreed on working together on the issue emphasising that a “clear commitment from the leaders was established that Turkey would play a lead role in securing Hamid Karzai International Airport, and we [US and Turkey] are now working through how to execute against that.”11 President Erdoğan too expressed satisfaction with the outcome of the talks on this issue.

Notably, the meeting came at a time when the relations between the US and Turkey had hit rock bottom due to differences over a slew of domestic, bilateral and regional issues. Turkey had expected a breakthrough after the Biden-Erdoğan meeting but this could not be realised. Although the meeting was termed as “positive” by both sides, it apparently failed to resolve any of the contentious issues.

While Ankara can take respite in President Biden’s statement that the two countries “will continue discussions” and that he is confident the two “will make real progress,” it would need to do more to be able to overcome the challenges facing Turkey’s relations with the US.

Source: This article was published by Manohar Parrikar IDSA