HomeExpertsPolitical Sufism: The Case of Menzil Nakshibendi Group during the AKP Governments
ExpertsTop Stories On Turkey

Political Sufism: The Case of Menzil Nakshibendi Group during the AKP Governments 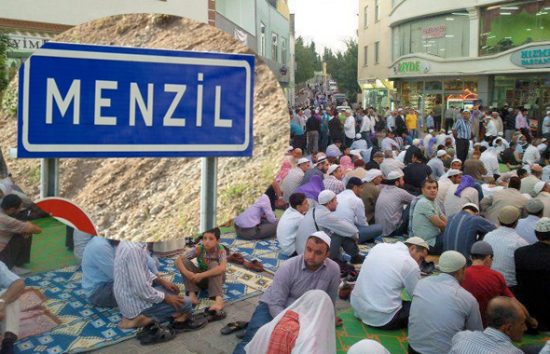 “During that night (referring to July 15, 2016 coup attempt), when, even before the president Recep Tayyip Erdogan called out people to the street, our volunteers from Semarkand Foundaiton held corners and stood on the streets to fight with coup plotters, 60 of those volunteers were killed and martyred” said Mustafa Bahadaroglu, on the TV Show called Cerceve (Frame) on Semarkand TV channel. Semarkand TV is a Menzil affiliated media organization.

Bahadaroglu is the vice president of the Semarkand Foundation, representative of Menzil Tarikat order. He continued saying “that night we as a foundation send messages to all of our volunteers to come to the street”

Menzil Tarikat published a half page endorsement of President Recep Tayyip Erdogan a week before parliamentary and presidential elections. First in their history to publicly support a political party divided many Sufis and begun asking questions.

Salafization of a Sufi Order

Religiously active and nonviolent apolitical Sufi orders in Turkey became suspicious under the rule of Recep Tayyip Erdoğan and his Justice and Development Party (JDP). As well known that, Sufi orders should be distant and keep away from the daily politics from their dergahs (gathering for contemplations) as lodges and vakif (gathering for congregational prayer, cultural and educational purpose) centers are highly politicized and turned into ruling party offices where they can recruit party constituents. Today, it as a political force and card, Menzil group is forecasted to be in the process of salafization in future with political aspiration and interests, forming a deep seated alignment for future politics of Turkey for JDP.

In a nutshell, The Menzil Naqshbandi-Khalidi oriented is one of the largest Sufi order in Turkey. Menzil tarikat headquartered in Menzil, (meaning destination) village in Adiyaman province of South East Turkey. Menzil is one of the largest growing religious order in Turkey, especially finds places among uneducated, small business owner, unemployment, Urban and middle class populations. The community accepted to transform into politics and operate under the AKP government. Menzil receives criticism from inside and outside for it is believed it delved and transformed into active political equation in recent years.

In the AKP government and on the condition of alliances, Menzil had two ministers namely, Energy Minister Taner Yıldız and Health Minister Recep Akdağ. In 2005 it founded TÜMSIAD with registered 15,000 members, and in June 2015, TÜMSIAD president Hasan Sert was elected to parliament as an AKP member.

In order to understand this demographic and sociological aspect of “Justice and Development Party(AKP in Turkish) and religious order alignment,” I conducted a semi structured survey with members ( Sufi) of the Menzil Tarikat, whose names remain confidential. Sufi often denotes acquiescent and submissive person to his or her Sheikh. My interviewee were active critical Sufi members of Menzil Tarikat choosen for this article. Most of them differ from the obedient passive Sufi. I carried out semi structured interview and met a couple of them in personal. I interviewed with 20 Sufis during the investigation process.

I asked them what ‘Dergah’ means to ‘Sufi’ now if compared to before and after AKP alignment.

They told me that Dergahs is no longer a place where they can go praying, contemplate and purify their carnal desires or kick their bad habits as it used to be before JDP. However, Dergahs are places now Sufi would come smoking, backbiting and labeling people with treachery and terrorism. They sincerely took a deep sigh – a sign of regret-and said, it became a place of mouthpiece of government and a sort of office disseminating political agenda and activity of party or schedules of JDP. They also added that they regularly receive ‘whatssup’ messages and informed if there is a rally or visits of President Erdogan going on in their cities. They said, they are more occupied with political agenda but before the JDP, they were more spiritual oriented people.

They further told me if someone is known or affiliated with Menzil Tarikat today, he will have more likely chance to have public lender from the government institutions, considering this lucrative alignment, businessman, professionalism and members of parties would like to rub elbow with Menzil sufi order to gain either financial or other means. Many people who think they can benefit the group would disguise as Sufi, visiting Dergahs and Menzil village. Paying a visit to Menzil village is one of the primary requirements to be an eligible Sufi.

This is uncontrollable and open to exploitations. Relatively, the high ranking individuals, among those are sons of the Abdulbaki El-Huseyni, current sheikh are called seyyids referring the grandson of the prophet in the circle are unprecedentedly bureaucratic.

They oppose western values such as; democratic principles, freedom of speech, and rule of law. According to my informants, due to the alignment, associations and collaboration with political party, Menzil confined to localism and lost its universal recognition and lost its moderate ascetical orientation to bulwark to rampant religious fundamentalism.

I asked them why many Sufis support president Recep Tayyip Erdogan. They said, many Sufis believe that he is a gift from the God. He is both political and religious leader who is an original authority who come once in ages to reform the religion. Ironically they also believe their Sheikh is also Mujtahid- original authority in Islamic law. To many Sufis, he is the only strong leader they have after demise of Ottoman Empire. He is the only capable leader who can fight with externals. I asked if they could name the externals, unwilling to name, they said they are leading superpowers mitigating and obstructing Turkey to be among superpower countries. They gullibly think Turkey is under attack, to fend off this encroachment, they believe, it is their responsibility to be with Erdogan.

One of my informants who has been a Sufi and worked in several foundations closed to Menzil for 40 years, told me that tarikat had never been associated with politics until today. Former Sheikhs were very careful dealing with parties. They were bipartisan, apolitical and inclusive. They were close to every members regardless of society or parties. Surprisingly, today Menzil Tarikat polarized and excluded people on the basis of which party they are part of. He said he calls Tarikat now as a holding company.

Also they believe that supporting Erdogan is not a political choice rather it is an ideological and brotherhood reason. My informal conversation with Sufis who are from the inside of the tarikat doesn’t constitute a scholarly approach to generalize however.

Most of my encounters say they are ordered to be obedient to the state and its leader, mostly they refer to one of the Prophet Mohammed (PBUH) saying that “obey your leader” and the common sentiment that they believe that has in this statement “ worst leader is better than no leader at all”. They believe Turkey, homeland is occupied. Almost all of the Sufis think that if Erdogan was not the leader now, seven countries would have already occupied Turkey.

To my observation on Menzil Tarikat, I have been closely watching their motives and behaviors after coup July 16, their unquestionable loyalty and staunch advocacy may be highlighted that the leadership they believe Erdogan is the only one to obtain power to fill the vacuum must have been nuanced in their discourse. Secondly they formed a sort of reactionary attitude toward secular ideology that is imbedded in CHP (Republic Public Party) policies in the past; a rooted grievances shapes their narratives, such as shutting down the religious education, madrassa, interfering public and private life during administration of CHP.

Thirdly, in order to fulfill the sharia law in Turkey and have an active role in society and politics, Menzil group will not withdraw from the public affairs thus consider the right to do that.