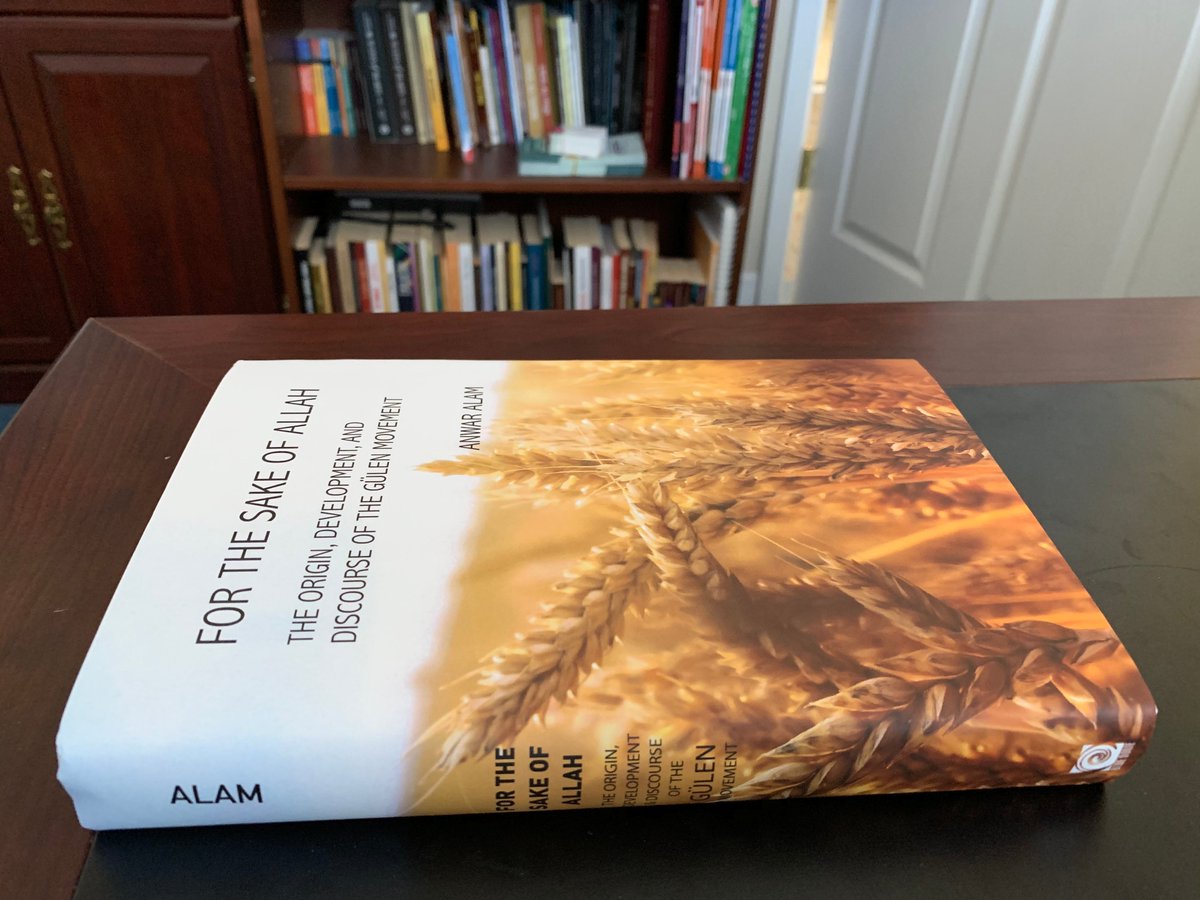 I have read the 356-page book of Indian professor Anwar Alam, who focuses on Fethullah Gulen, The Movement, and Islamic word, titled “For the Sake of Allah” in details including the footnotes.

Prof. Alam brings an objective view on The Movement in his book, which has been published recently and gives wide coverage to academic opinions. But the book addresses 3 main topics:

Fethullah Gulen did not only talk about living Islam in a proper way, but he also emphasized on the representation of Islam properly in our age. This avant-garde representation lies behind the success and acceptance of the schools of The Movement throughout the world. Solutions were being searched for the crisis Islam went through in the 20th century, thus the movements of Fazlur Rahman and Maududi in Pakistan, Hassan al-Banna in Egypt, and Khomeini in Iran came to light. But The Movement managed to carry the values of Islam most properly in our age. Just as Imam Al-Ghazali, Imam Rabbani, Mevlana Halid-i Bagdadi, and Bediuzzaman Said Nursi were a remedy to the troubles of the Islamic world in their time, likewise Fethullah Gulen is the modern-day novation movement which was inspired by these movements in the past, and despite all of the destruction efforts made by Erdogan, it will continue to serve mankind without interruption and shattering.

Fethullah Gulen, just like Gandhi, remained within legal boundaries throughout his life. Throughout all of the oppression eras, he remained in the flow of life and never in his life turned his way towards illegal grounds. He answers all of the unlawfulness of the Erdogan regime in the same manner today. Not a single member of The Movement could be mentioned next to any kind of illegal activity in the countries they reside for the last 50 years not only in Turkey but throughout the world. Since Erdogan regime cannot find any illegal actions of The Movement, they call it a terrorist organization. There are no legal grounds in Turkey or in the world for the actions taken by Erdogan in order to destroy The Movement by using the power of the state. This is why Erdogan was not accredited anywhere in the world, other than some countries which face democratic and legal problems.

The thesis, which dictates The Movement and the political movement of Erdogan have been together up to an era and took action like allies, is not true. If you observe the 80-year life of Fethullah Gulen and the Islam perception represented by The Movement, it will be visible that this kind of coalescence is not possible. Gulen has been stating from the very beginning that religion is not a political or ideologic matter, and such movement cannot have any solidarity with political Islam. The reason for The Movement to appear like they had been together with AKP is the fact that Turkey had been on a democratic path because of the pressure of the European Union. Gulen supported the rights, justice, equality, and democracy agenda of Turkey.

I visited Fethullah Gulen recently and told him about Prof. Alam’s content in his book. Gulen said: “These messages must be heard in the world.” Gulen also commented on Prof Alam’s statement “Gulen supported the rights, justice, equality, and democracy agenda of Turkey”, which Gulen had already emphasized multiple times in the past, and said: “We were deceived.”

Gulen’s article titled “Despite today’s example of Turkey, Islam is compatible with democracy” published on Le Monde newspaper on 25 February 2019 was published by grand newspapers in many countries of the world exactly like it is from Peru to Afghanistan and Russia to Bosnia. In Russia, the article was published by Pravda newspaper.

In his article, Gulen says “Erdogan abolished Democracy by seizing the state in Turkey, and betrayed the values of Islam.” Just like Gulen expresses, he “took a heavy toll on the Islamic world by destroying the model of Turkey, where Islam and democracy had lived together.

Aside from the Erdogan regime devastating Turkey, another shocking example became apparent about how he tried to spread his agenda of being the caliph of Islam throughout the Islamic world. Officers of Erdogan are making the children sing “Happy birthday Erdogan” throughout the schools of The Movement they seized, which were pioneers in their fields, in some of the Islamic countries, and the footage of them are individually published by the communication office of Erdogan.

I hope the government of these countries will understand what kind of a mentality they are facing soon. Gulen told “Eventually the conscience of humanity will win” about the course of events in Turkey and the attitude of the civilized world to his guests, one of whom was an academician from Australia and the other was a journalist.

It is important not to be doubtful that eventually a group in the Islamic world, which was deceived by Erdogan’s propaganda, will wake up one day, and the conscience of humanity will win against the calamitous course of events in Turkey. However, due to interstate politics, it is obvious that the regime of Erdogan has been extending… In fact, Turkey, as a country that is a sponsor and assister to the jihadist terrorism, does not only have a destructive regime only for the region but to the whole world. It is even more destructive to its own people than the regime of Maduro in Venezuela.

Erdogan regime stigmatizes all of his opponents as terrorists or spies. While on the way of regional elections, he calls the other three opposing parties a terrorist alliance and threatens to arrest a woman, who is one of the leaders of these parties, Meral Aksener. Because Aksener is not a deputy and the prosecutors of the regime might take her into custody with a direct instruction coming from Erdogan. Well-known authors and the representatives of civil society are in jail during the Erdogan regime. The articles of one of these individuals, Ahmet Altan, was published in England with the title “I will Never See the World Again” which he wrote while he was imprisoned. Publisher Anne Meadows announced this book to the readers with her following statements: “Ahmet Altan received a life sentence due to the fact that he raised his voice against the Erdogan regime and this book will never reach to him in prison, but you can buy it…”

Osman Kavala, a well-known civil society representative in Turkey, is being accused of trying to overthrow the government as a name behind the 2003 civilian protests in Istanbul in cooperation with George Soros on behalf of the state of Israel. He is, just like Ahmet Altan, a prisoner of the Erdogan regime.

Despite all of these incidents, the civilized world did not adopt a manner for the tens of thousands of prisoners the same way they did when their own citizens faced the same imprisonment under the Erdogan regime. US President Donald Trump said “He is a spy as much as I am” and saved the American Pastor Andrew Brunson, who had been in prison for two years because of espionage and brought him back to his house with a private jet. Erdogan had Deniz Yucel, a German journalist, arrested for espionage and said: “While I am in power, that person cannot get out of prison”. However, together with Germany’s decisive manner, the journalist was saved and brought back to Germany with a private jet.

In fact, as much as Pastor Brunson and journalist Yucel are spies and terrorists, author Ahmet Altan and activist Osman Kavala and the other tens of thousands of prisoners are that much terrorists and spies too.

According to the date of the Stockholm Center for Freedom, the number of people abducted by Erdogan’s intelligence forces in Turkey is 25. There are people who died under questionable circumstances while imprisoned including judicial members, judges, prosecutors, and military officers. More than 30 people died while they were being interrogated by torture.

The stories told by Jason Rezaian, the Tehran reporter of the Washington Post who was saved while he was a prisoner in Iran, in his book “Prisoner”, and the interviews of Pastor Andrew Brunson after he was saved provide evidence about how the people can easily be stamped as terrorists or spies in the countries where there is no universal law such as Iran and Turkey.

Because of all these reasons, the oppression regime in Turkey awaits to face a proper attitude and interest of the civilized world as much as Venezuela.