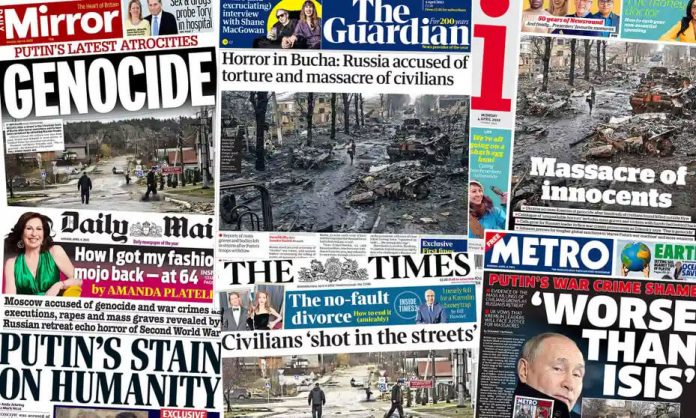 Ukrainian President Volodymyr Zelensky deplored “genocide” while visiting Bucha, whose streets were littered with dead civilians. While Joe Biden refers to Vladimir Putin as a “war criminal”, he does not describe Russia’s killing of civilians as “genocide.” No matter the label, Putin has targeted civilians and violated the Geneva Conventions. Russia’s actions require a stronger accountability mechanism, punishing the perpetrator and deterring comparable crimes in the future.

The terms “genocide”, “crime against humanity” and “war crimes” are often conflated. Academic debates about terminology are irrelevant to Ukrainians on the frontlines of Russia’s aggression. Regardless of what it’s called, Russia’s actions in Ukraine demand severe consequences.

The Twentieth Century was the bloodiest in human history. 1.5 million Armenians were victims of genocide during the Ottoman Empire. Adolph Hitler systematically exterminated the Jewish people. Other examples of genocide include the killing fields of Cambodia, ethnic slaughter in Rwanda, targeting of Muslims in Bosnia and Herzegovina, and Azerbaijan’s ethnic cleansing in Nagorno-Karabakh.

The legal scholar, Raphael Lemkin, drafted the United Nations Convention on the Prevention and Punishment of Genocide in 1948. Lemkin created the word by combining the ancient Greek word genos (race, tribe) and the Latin cide (killing). The Convention focuses on prevention, hoping to dissuade potential perpetrators from committing the most heinous crimes.

The Rome Statute of the International Criminal Court entered into force in July 2002. It adopted the Convention’s definition of genocide, which has four elements: i) The perpetrators killed one or more persons; (ii) such persons belonged to a particular national, racial or religious group; (iii) the perpetrators intended to destroy in whole or in part that group, as such; and (iv) the conduct took place in the context of a manifest pattern of similar conduct against the group that could affect their destruction.

Russia’s aggression against Ukraine was referred to the International Court of Justice to determine if its actions meet the definition of genocide. Intent is the critical factor.

What was Putin’s motivation? Was it to exterminate Ukrainians or to establish a land bridge between Crimea to the Russian Federation?

Putin’s cynicism exacerbated the situation. In a case of the pot calling the kettle black, Putin falsely asserts that Ukraine was subjecting Russian speakers to “genocide.” Stymied on the battlefield, Russian forces simply slaughtered Ukrainians. Their bodies lie in mass graves or have been burned by Russian soldiers trying to cover up their crime. The Office of the UN High Commissioner for Human Rights documented more than 3,000 civilian casualties, with 1,417 deaths. The actual figures are likely much higher.

Why is Biden reluctant to use the G-word?

Signatories of the Genocide Convention are required to respond. Transferring weapons to the Ukrainian armed forces helps their self-defense, but it is an arm’s length relationship. If Biden calls it genocide, NATO would be pressured to intervene more directly as Russian troops retreat and the full horror of Russia’s crimes is revealed. Biden justifiably fears escalation with nuclear consequences.

Before invoking the Genocide Convention, investigators should continue their work documenting what happened. A tribunal or other accountability mechanism is called for. There’s no doubt that Russia is the “aggressor nation.” However, a war crimes trial could be hard-pressed to establish command responsibility between Putin and his field officers. Biden is choosing his words carefully to avoid limiting his options.

Now is not the time to prevaricate. Beyond arming Ukrainians, the West needs a plan to punish Putin for the destruction he has wrought. An effective accountability mechanism could cause other tyrants to think twice. China’s President Xi Jinping is also a culprit for committing genocide against Uyghurs in Xinjiang, scorning human rights norms and the international order.

Biden is playing it right. He is not overplaying his hand until researchers have been on the ground to document what happened. As more facts come to light, Biden may change course and call it genocide.

There is a special place in Hell for disgraced tyrants like Putin, Hitler, and Pol Pot. Letting Putin off the hook would embolden others to aggress against their neighbors and slaughter civilians. The civilized world cannot tolerate such crimes.

Originally published on the Institute for the Study of Human Rights on April 7, 2022