HomeHeadlineShame-Scam-Sham of the Act of Voting: Part 1
Headline

Shame-Scam-Sham of the Act of Voting: Part 1 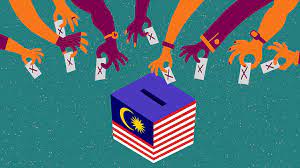 These words came to me today as I continue to skim through the news and views of what’s up in the never-ending game of those with money to throw and gifts of the gap to make promises they will break, in any election in perhaps any nation. It is as if we are still trapped in this notion that the human self as an individual needs to be governed by those who think they are “philosopher-rulers” when they are in reality seasoned or aspiring robber barons with no day jobs but feed their bottomless-pitted-bellies with the wealth they scavenge from gullible voters promised pies in the skies or keys to pearly gates of heaven.

Who should rule and why? How should power be visualized and exercised? Can elections guarantee democratic participation in the best sense of the word? What if voters turn out to be civic-education-uneducated enough to help the robbers win and next, the nation is ruled by a mob or worse an “immoral majority” who are only politically conscious when cash is handed to them on polling day? Will the cycle of absurdity continue? Will the meaninglessness of democracy persist?

The above are Platonic questions requiring Existentialist answers. Are elections today a shame, a scam, and a sham? Why do we still participate in it? This three-part essay will look at the philosophical, pragmatics, and piratical concerns surrounding the idea of the value of one’s vote.

What is politics anyway?

“Democracy” from the Greek “demos” and “kratos” or rule of the people is so vague a political-philosophical term that is used liberally with certitude/ Everybody thinks it’s a word with the same meaning, of similar denotation and connotation and with its attendant sign, symbol, semiotics, and representation.

Hence the Communists of China called themselves a democracy, the Ayatollahs of Iran called themselves messiahs of Islamic democracy, President Erdogan of Turkey called himself a Muslim Democrat, the North and South Koreans pride themselves in claiming heir to the word democracy, and of course, the Malaysians and Indonesians said they are practitioners of guided democracy. The Americans still reserve themselves from calling the US a democratic nation but a working democracy of an evolving republic.

Yet “democratic institutions” are propped up at every birth of a modern pots-Peace-of-Westphalia era claiming their birth and developmental pattern of growth, mental, and political health is calibrated and sustained through that ritual of democratic evidence called “elections”.

It seems that regular elections however shameful its practice, scamming intention, and shamful its outcome are seen as a necessary act in propping the image of democracy and watermark or digital certificate of democracy for the global community to see.

Rhetoric and reality of voting

Maybe voters are not philosophically mature enough to understand what is it they are consenting to in the process of giving part of the “natural rights” (as the philosopher Jean-Jacques Rousseau) would say to the “General Will” of the people in a “democracy”.

They are told that they have the right to vote and their vote is powerful enough to even overthrow governments the “democratic way” having been told this, they are happy to be accorded that notion of psychological or even “mandate-of-heaven” type of power to decide the next governments.

Being told this and being made special come election time is already half the battle (or lost) in the democratic lives of the modern citizen. The other half of the game is left for the political beggars 0r the “politicians campaigning” to give fiery and spicy speeches and sugary talk with promises of paradise and plenty to the voters hungry for certainty, especially when their lives have been plagued with variegated forms of misery anyways, brought and wrought by election promises unfulfilled.

Once the vote is cast, the game is over. The voters leave the polls, and the no-day-job politicians who win will celebrate the possibility of having years ahead of them or her living their all-to-human dream: living like royalty. Forget about the voters. What do they know anyway? We have already given the cash and the handouts and the goodies during campaigning days and given the promises of better life guaranteed. How many no-day-job politicians you know, started off as penniless and end up billionaires anyway? And their status gets elevated as modern-day demigods, untouchable?

Thank you voters. You have cast an intelligent vote.

But as the great British rock group Led Zeppelin said, the song remains the same.

The taste of the testosterone of power

Though an elusive and least understood concept or word widely used, it is a drug. Politicians especially, in our discussion of voting, general elections, and democracy, need it. It is the libido of getting what one wants and how to get things done. Whether framed as transformative or totalitarizing, angelic or demonic, Gandhian or Machiavellian it is the fentanyl and angel dust or crack cocaine or opioid of those seeking power to dominate others and to plunder coffers.

Machiavelli advised the prince to grab power, hold on tight to it, and use it to destroy others before they destroy him. Once you take that drug, you’re an addict. You don’t want to leave your ‘hood. Betray your homies. Your people. Your gangsta friends. Once you make the bones as the Mafia would say, you hustle and wrestle until you are stoned enough to be happy and to hold on to that happiness. The power. Because if you lose that joint — that rasta ganja thing called power, as Bob Marley would say, your enemies will want to bring you down and slaughter in the hood, on the street where you pedal power, and leave you dead because when you were powerful and powerful sniffing and getting high on power, you wanted your rival dead anyways.

So, go figure these metaphors, similes, personification, and alliteration, and the rhyming verse on the word power.

Go figure out why dictators live long to the ripe old age of their testosteronality. Why any wise politician would want to keep their friends close and enemies closer, as Don Vito Corleone the Godfather would advise? Why politicians who wish to avoid jail time would want to buy time, buy people, and buy and buy everything they wish to have using the people’s money? Why? because of this addiction to power.

Below is a list of world leaders who overstayed their welcome, judged from a political-commonsensical-educated point of view of how long shone be in power vis-a-viz the level of education of voters who put them in power;

So, voters will give them more money (“Brother can you spare a dime -kind of syndrome) for this addiction, by using the only spare change of their Natural Rights they have: THE VOTE.

So– how do we help cure their addiction?