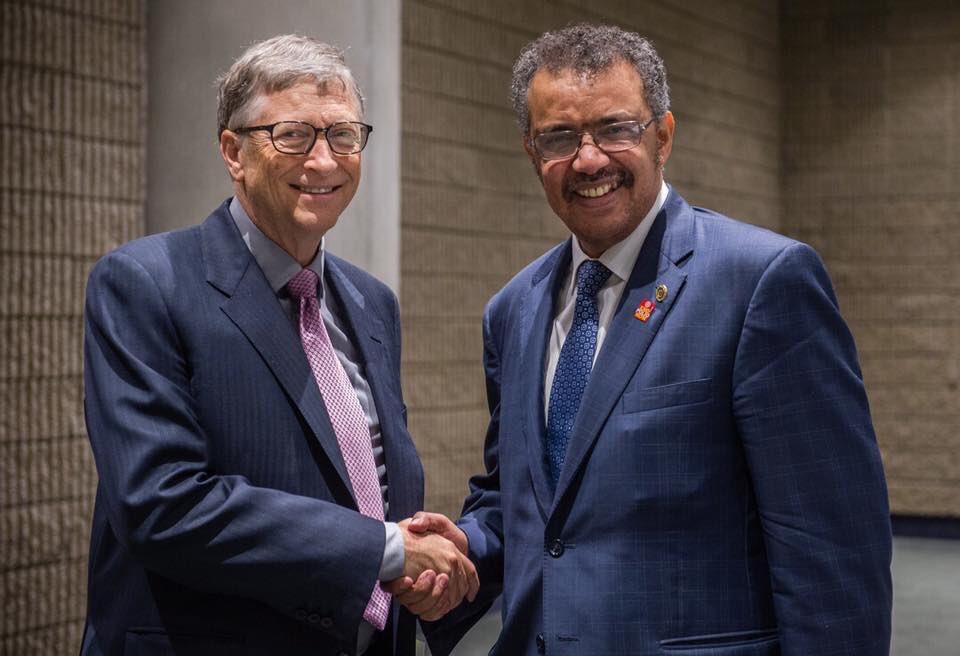 I am not a scientist, a theologian on morals or an economist.  I get a World Health Organisation (WHO) Media Team alert capped “Urgent Update” in the advisory category. It is an invitation to “a virtual launch of landmark collaboration to accelerate the development, production and equitable distribution of vaccines, diagnosis and therapeutics for COVID-19.

“The launch … is being co-hosted by WHO director-general Dr Tedros Adhanom Ghebreyesus, Emmanuel Macron President of the French Republic, Ursula von der Leyen, President of the European Commission, and the Bill and Melinda Gates Foundation.”

I say to myself: “Bill Gates? Not again. Isn’t the person, whose own people, the Americans, have broken a record in pursuit of   a White House petition to investigate on ‘crimes against humanity’ and ‘medical malpractice’?

“Isn’t this the person being described as having ‘a messianic conviction that he is ordained to save the world with technology and a god-like willingness to experiment with the lives of lesser humans’ and to whom, ‘vaccines… are a strategic philanthropy that feed many vaccine related businesses and give him dictatorial control over global health policy –the spear tip of corporate neo-imperialism?’”

COVID-19-related observations made by Pope Francis on Easter Monday come back to my mind.  He said: “In finding solutions to this pandemic, the choice will be between life, the resurrection of the people, and the god of money.”

The Pontiff went on to caution, warn or admonish global citizens: “If you choose money, you choose the way of hunger, slavery, wars, arms factories, uneducated children. . .”  Eventually, he prayed to God: “…help us to choose the good of the people, without ever falling into the tomb of mammon.”

As I said from the very outset, I am not a scientist, a theologian on morals or an economist. Notwithstanding, in my mother tongue it is said: “Akabi mpia”—contextually translated, “the underlying problem is money.”Among psychologists it is held that if you want to know somebody’s real character, give that person money. With a little margin of error, can we visualize Pope Francis reference to “falling into the tomb of mammon” from this perspective? The Swahili culture does not mince words. It says: “Pesa ni shetani” – “Money is Satan”.

Those who are more familiar with the Scriptures understand that the “mammon” is a high-ranking Satan – the like of Lucifer—who can undertake big assignments like trying Jesus after 40 days of fasting or prompting a disciple that betrayed him.

In our day, stories about financial and political greed that lower the dignity of human life or ignore it altogether abound.  This is where we encounter the practice of science without humanity, commerce without morality and politics without principle.

Could the IT billionaire  turned-philanthropist Bill Gates have fallen into this trap to the level of being linked with hatching a Coronavirus plot to profiteer from its vaccine part and use illness to cut down the global population?  Why should he?

At the same time, this should not come as a surprise. On a historic note alone, while Bill Gates cannot be compared to Jesus, those who demanded the death of Jesus by being crucified are the ones whose sick he had  cured, the dead he had brought back to life and the hungry he had fed.

Among famous hymns of the Holy Week leading to Jesus death, is the “Polule Meus” –“My People”. He tells them: “Quid feci tibi aut in quo contrista vitae? Responde mihi.”  In grammar- respecting English: “What did I do (to you which is) contrary to life? Reply (to me).”

In a way, therefore, could it have been along the same lines that the Gates’ Foundation CEO Mark Suzman, found himself reacting: “It is distressing that there are people spreading misinformation(s) when we should be looking for ways to collaborate and save lives”?

According to the mission statement, the Foundation “is guided by the belief that every life has equal value … works to help all people lead healthy, productive lives …  and give them the chance to lift themselves out of hunger and extreme poverty.”

The latter part of the statement –“and give them the chance to lift themselves out of hunger and extreme poverty”– brings the poor countries of the world into the Foundation’s service delivery framework. The bottom line here constitutes the agricultural question, in whose aspect the seed issue remains critical and demands delivering address for corporate image.

Way back in 2015, placard-wielding food sovereignty activists held a demonstration outside the London Gates Foundation offices in protest to a meeting jointly sponsored with the USAID to dwell on a study targeting the commercialization of African seed and agriculture.

Three key protest messages were sent out – one from the organizers –Global Justice Now—and the others from South Africa and Ghana.  In the eyes of organizers, “the measures being promoted”…did not constitute “…aid but another form of colonialism. We need to ensure that the control of seeds and other agricultural resources stay firmly in the hands of the small farmers who feed the majority of the population in Africa rather than allowing big agribusiness to dominate even more aspects of the food system.”

According to the African Centre for Bio-safety based in South Africa, “an equitable and sustainable solution to seed production and distribution can only come from direct engagement with farmers and their organisations to ensure their active involvement in these activities. Public-farmer partnerships that integrate farmer and scientific knowledge will generate a more accountable process, and produce longer-lasting and more meaningful solutions for African agricultural production, than these profit-driven, exclusive and narrow processes.”

The message from South Africa ran as follows: “Seeds are vital for our food system and our small farmers have always been able to save and swap…freely. Now our seed systems are increasingly under threat by corporations who are looking to take more control over seeds in their pursuit for profit….”

The situation on the ground reveals some level of foggy and possible interest conflict between Bill and Belinda Gates Foundation vision and mission and the presence of the Alliance of a Green Revolution in Africa (AGRA) in the field as its subsidiary.  What is the difference between AGRA and the Gates’ Foundation?  Is it like that of corporate efficiency and effectiveness?

Since 2012, ten African countries, branded ‘partner’, have been trapped in the G8 New Alliance for Food Security and Nutrition (NAFSN) ‘protocol’ to help 50 million people out of poverty and hunger through the public-private partnership. The initiative is supported by the EU, the US, the UK, the World Bank and the Bill & Melinda Gates Foundation.

Under this ‘protocol’ the ‘partner’ African countries are supposed to make it a crime for their small farmers to possess uncertified seed. As an interested party, the Foundation may need a facelift campaign to put this outright three-bar seed slavery congruence off the hook.

It is here the option of Bill Gates resetting the global account becomes relevant and, even if possible, change the password altogether. There is an African indigenous knowledge which cautions on occupations as follows: “Ababumbi nibo balila aha ruguhyo” – meaning “it is the pot makers who take their meals on broken utensils.” Is the global IT guru and philanthropist Bill Gates Foundation losing track and going in for money or coming under 3600 degrees’ grip by cyber and morals hackers? That is the question!