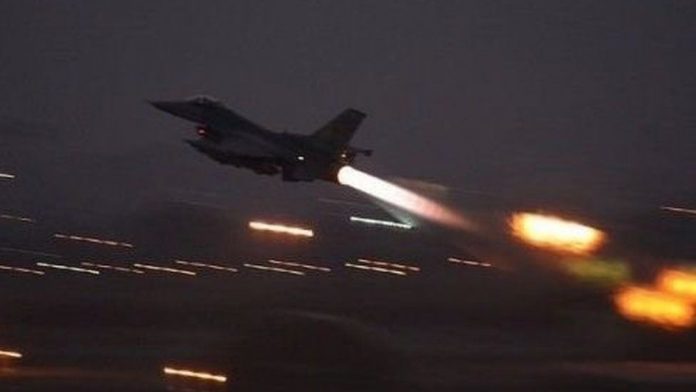 Turkey launched an aerial bombardment in North and East Syria (NES) at midnight on November 19. Strikes from warplanes and drones, as well as shelling close to the Turkish border or Turkish-occupied territories, have since intensified. Turkey’s reckless actions not only risk a regional conflagration. They put US forces in harm’s way. On the 22nd at 13.00, Turkey bombed a US base north of Hasakah, targeting Syrian Democratic Forces working with the US on counter-terrorism operations against ISIS. Bombs exploded 130 meters from US troops, putting them in harm’s way.

I received a message this morning from Columbia’s educational partner in the NES:

“I couldn’t sleep tonight due to the intensive bombing of Turkish drones against Qamishli. A drone bombed so close to the place where I am staying. In case anything happens here and people started to run to save their lives, I won’t be able to do that because I don’t even have a car to drive my family to safety. I am dying here — left alone without any kind of help.”

Article 5 of the North Atlantic Charter enshrines the principle of collective defense, stipulating that an attack against one NATO member will be considered an attack against all. It was never foreseen that a NATO member, Turkey in this instance, would shell troops from the United States.

The US spokesman responded, “The United States expresses its sincere condolences for the loss of civilian life in Syria and Turkey. We urge de-escalation in Syria to protect civilian life and support the common goal of defeating ISIS.” According to the spokesman, “We are communicating with Ankara publicly and privately to stop these attacks.” The message is clearly not getting through. There is no place for prevaricating and moral equivalency during a time of crisis.

Senior US officials should publicly condemn Turkey’s aggression and offer a security guarantee to the SDF. We owe it to them for acting as America’s boots on the ground in Syria. More than 11,000 SDF fighters – mostly Kurds — were killed and 24,000 wounded fighting ISIS at America’s behest. The SDF guards the al-Hol camp where up to 70,000 ISIS families are detained.

The Turkish government justifies its cross-border attacks by implicating Kurds from Syria in the Istanbul bombing on November 13, which resulted in the deaths of six civilians. Before Erdogan’s reflexive and rash response, the Istanbul bombing should be thoroughly investigated, and the perpetrator identified. US law enforcement has expertise and can assist.

Erdogan says the SDF is a branch of the PKK, an armed group of Turkish Kurds struggling for greater political and cultural rights in Turkey. He claims Kurds use Syria as a base for operations against Turkey. These are mistruths.

Kurds never attacked Turkey from Syrian soil. There was one confrontation in 2018 when Turkey launched “Operation Olive Branch” and attacked Afrin, a multiethnic city in Syria near the border with Turkey. The SDF responded with a pinprick artillery strike.

Turkey has always sought a security buffer in Syria on its border. Since 2016, it carried out a series of incursions and today controls parts of northern Syria. While there has been fighting between Kurds and Turkish armed forces, including their jihadist proxies, fighting only occurs in areas that are occupied by Turkey. The Kurds in Syria have bent over backwards to avoid escalation. Even when the Turkish military and their jihadist proxies invaded Jarablus, east of the Tigris River, the SDF did not respond militarily.

We have seen this before; Turkey’s actions are predictable. Erdogan will call the Kurds “terrorists” and implicate them in the Istanbul bombing even with no evidence of Kurdish involvement. Turkey will bomb North and East Syria where the Kurds have established local administration. He will escalate violent conflict in an effort to rally domestic support.

Erdogan vows that air operations are “just the beginning” and promises a land invasion of northern Syria. Today Turkey is massing forces for an invasion of Kobani, which already withstood a brutal attack by ISIS. Erdogan is determined to “close down all of our southern borders (and establish) a security strip” in Syria.

War also has a political motive. Erdogan seeks to galvanize nationalist Turks behind his policy to demonize and kill Kurds. Warring with the Kurds is good politics in Turkey. Putting Turkey on a war footing seeks to mobilize support for Erdogan’s Justice and Development Party in next year’s national election.

When Turkey previously threatened Kurds in Syria, US officials worked behind the scenes to de-escalate tensions. The Biden administration is in a bind. It does not want to antagonize Turkey for fear of dissuading Erdogan “help” in Ukraine. In fact, the US gets little from Turkey, which refuses to impose sanctions on Russia and serves as a sanctuary for Russian oligarchs. Yet Washington is largely silent in the face of Turkey’s domestic human rights abuses and regional warmongering.

President Biden himself should publicly condemn Turkey’s actions and send Secretary Tony Blinken to Ankara with a strong warning: there’s a steep price for its aggression.

Silence is complicity. Turning a blind eye makes the US an accomplice to Turkey’s crimes.

David L. Phillips is Director of the Program on Peacebuilding and Human Rights at Columbia University. He served as a Senior Adviser and Foreign Affairs Expert to the State Department during the Clinton, Bush, and Obama administrations.