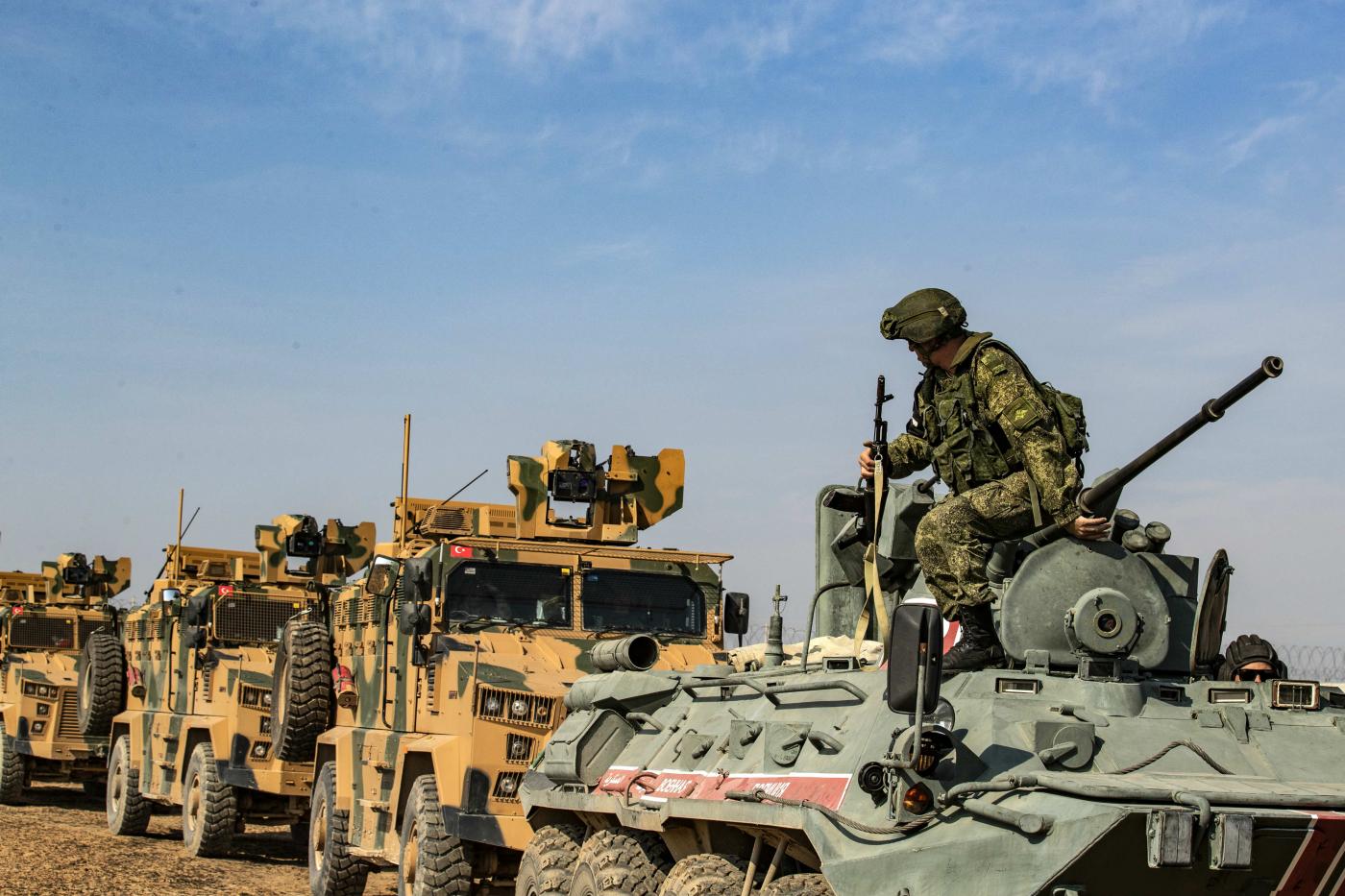 Turkish foreign policy in Syria can be summed up in a simple formula: Turkey, under its President Recep Tayyip Erdoğan, is pursuing its goals with persistence and patience within the framework of a longer-term strategy. To this end, it has developed “salami tactics,” using negotiating skills, seesaw politics, pressure, and threats to obtain acquiescence, in little slices, from the United States and Russia to limited military operations in northern Syria.

The argument centers on the right of self-defense against the Kurdish YPG and the economical burden of Syrian refugees in Turkey, which justifies the creation of a “safe zone” for their settlement in northern Syria. Serious assaults in Turkey, shelling of Turkish territory, and the deaths of Turkey’s own security forces in northern Syria can act as a final reason, a casus belli.

This pattern was followed by the launch of Operation Euphrates Shield in August 2016, just four days after a suicide bombing that ultimately killed 57 people in Gaziantep, or the warnings of military intervention in Idlib, which became a reality barely two weeks later with the deaths of 34 Turkish soldiers in northern Syria.

This makes the words of Turkish President Recep Tayyip Erdoğan all the more serious, which he uttered at a press conference following a cabinet meeting on October 11. According to consistent reports in media outlets such as Daily Sabah, Duvar News, Aljazeera, Middle East Monitor, Defense Post, or SOHR, Erdoğan cited the deaths of two members of a Turkish police special forces unit near Azaz, northern Syria, who were hit by a guided missile from the Kurdish YPG-controlled region of Tal Rifaat on the day before while riding in an armored vehicle, as the latest reason to “[…] take steps for the solution of these problems as soon as possible.” According to the statement, the Turkish president also said that Turkey has “no patience left regarding some regions in Syria, which have the quality of being the source of attacks on our country.”

The Turkish idea of a “safe zone”

For years, Turkey’s Syria policy has aimed to establish a 32-kilometer (20-mile) deep buffer zone on the soil of its neighboring country, in which some 1-2 million Syrian war refugees, as well as Islamist militiamen and their families, would be settled. This would allow Turkey to change the population composition of important Kurdish-populated areas and prevent the creation of an autonomous Kurdish territory on Turkey’s southern border, which could otherwise possibly have an impact on Kurdish settlement areas in southeastern Turkey.

Turkish President Recep Tayyip Erdoğan took a significant step toward this goal in 2019. In “Operation Peace Spring,” he persuaded the United States – briefly – to withdraw from Syria and brought the 120-km border zone between Tel Abyad and Ras al-Ain to just short of the M4 highway under his control. The remaining border areas were to be under Russian control, according to the 10-point Sochi Agreement (2019) that ended Turkey’s “Operation Peace Spring.” The agreement stipulated in its 5th point that the Kurdish YPG must withdraw behind a 30-kilometer (18.6-mile) deep “safe zone” even in Russian-controlled border areas. Point 6 of the agreement explicitly stipulated that the Kurdish militia, which Turkey considers a Syrian offshoot of the PKK, must likewise leave the region around Tall Rifaat and Mambij along with their weapons and equipment. However, these regulations have not been implemented by Russia. Regular skirmishes between Turkish artillery, jihadist mercenaries, and the YPG were the result.

Turkish President Recep Tayyip Erdoğan’s announcement does not coincide alone with the impact of mortar shells in the Turkish border district of Karkamış in the southern province of Gaziantep and in Jarabulus in northern Syria, and the recent explosion of a car bomb in Afrin that killed six people. Erdoğan’s position in Syria appears to be coming under increasing pressure as Assad’s standing in the Arab world improves, as former Turkish Foreign Minister Yaşar Yakış points out in an article in Arab News.

Considerable frustration on the Turkish side is also rooted in US President Joe Biden’s announcement on October 7 that he would extend the national emergency powers in Syria because “[…] in particular the actions by the government of Turkey to conduct a military offensive into northeast Syria undermines the campaign to defeat the Islamic State of Iraq and Syria, […] and continues to pose an unusual and extraordinary threat to the national security and foreign policy of the United States.”

This gives the impression that Russia and the United States are simply ignoring Erdoğan’s demands, even though Turkey sees itself as almost on a par with them in their self-image after their military success in Idlib a little more than a year and a half ago. In a brief military operation to protect Islamist militias, the Turkish army, with the novel use of its combat drones, had inflicted a defeat on the weakened Syrian army in Idlib in barely a week, a feat that had previously been thought scarcely possible.

How far can Turkey go?

The pressing question these days, however, is to what geographic scope and timing can the presumably imminent Turkish military operation be narrowed down?

At the moment, the indications speak for the area around Tal Rifaat. A map published by the Turkish Anadolu Agency shows the densest YPG attacks there. In addition, there are already reports of preparations for war and the beginning of psychological warfare: SOHR on Saturday, for example, wrote of members of the Syrian 4th Division arriving at Menagh Airport as reinforcements; Daily Sabah on Sunday published apparent photos, shot by drones, showing YPG militiamen digging trenches.

On Friday, SOHR reported the dropping of leaflets from a reconnaissance drone over Tal Rifaat calling on the population to cooperate with Turkish forces. Turkey’s Daily Sabah published a tweet on Sunday from the Syrian Liberation Front (SLF) saying it was ready for action.  This formation is the amalgamation of five Islamist militias with some 20,000 fighters under the umbrella of the Turkish-backed Syrian National Army (SNA), which was only launched on Sept. 9 of this year.

Some experts believe a limited military operation in Tel Rifaat is conceivable, provided it is acquiesced to by Russia. In this case, the area could remain under Russian control and Moscow could give Turkey a time slot for a military operation carried out by proxies and supported by the Turkish army.

Another conceivable variant involves a fourth Turkish invasion of northern Syria. Such a move would likewise require Moscow’s acquiescence and could involve a territorial swap. In his article for the Atlantic Council, Ibrahim Hamidi cites two past examples of this: for example, Turkey renounced the capture of Aleppo in December 2016 in exchange for Jarablus, al-Bab, and Azaz. In early 2018, according to Hamidi, interests in Afrin were balanced with those of Syrian government forces in Eastern Ghouta.

This would raise the question of what territorial counterpart Moscow considers equivalent.

Metin Gurcan cites sources that “[…] told Al-Monitor that although Russia is ready to greenlight a limited Turkish incursion in Syria in principle, talks between the two capitals over the location of such an operation are unresolved, with the Kremlin remaining reluctant on the Tell Rifaat option.”

Thus, another arena comes into play: Turkey could try to link its two invaded areas in northern Syria. This approach would also not be new. TRT World reported in 2018, in the wake of the Afrin incursion, that the operation was intended to link the rebel stronghold of Idlib with the “Operation Euphrates Shield” area. This would concern the symbolic Kurdish city of Kobanê in an essential way, the capture of which would generate greater attention and also displeasure in the West than the capture of Tal Rifaat.

All of the variants, which take place with Russia’s acquiescence, are not tied to any fixed date and could happen at any time. However, there is also the idea that the Turkish president could still use the summit of the 20 major economic powers in Rome at the end of October as a last-ditch attempt at a diplomatic solution. A conversation of senior Turkish officials with Reuters fuels this assumption. This move makes particular sense if Erdoğan is either seeking a grand solution with Russia and the U.S. that also involves northeastern Syria, and wants to resume his seesaw policy with the U.S., or if he wants to secure backing from Joe Biden for his planned action against the Kurds.

This article was first published by Geopolitical Monitor.com