HomeHeadlineThe Blue Bus vs The Bridge
HeadlineTop Stories On Turkey

The Blue Bus vs The Bridge 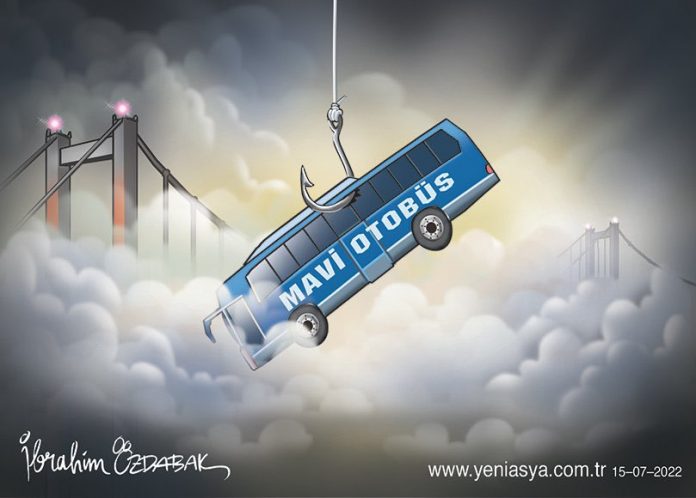 The so-called victory of the July 15 failed coup attempt wasn’t commemorated with excitement and joy as it has done in the last years. This is seen as a sign of the awakening of people in Turkey against the state rhetoric which has many biases and fallacious information about the coup by the independent journalists.

They also said that the economic crisis is so deep, and people are not in the mood of celebrating any political events, especially the ones that are organized by the ruling party, AKP. This event is titled the Democracy and National Unity Day of Turkey which is observed as a national holiday. While millions of people gathered for the first celebrations, just five thousand people attended this year’s program, even though this date was a national holiday. And this is a huge change and politically tells a lot of things about the future of Turkey.

The change in the mind of people didn’t happen over a night, and it took six years. Unbiased and fact-seeking journalism of the exiled journalists made a huge impact on the minds of the people. With bad economic conditions and financial difficulties, people started thinking differently and asking questions about the regime and the practices of the Erdogan regime. All of these things altogether brought the nation and Erdogan to a divergent point and that could cause a painful disengagement sooner or later.

And, this year, intellectuals, journalists, and analysts didn’t discuss mostly the coup itself, but a documentary that is titled Blue Bus made by six cadet students who were sent to the Bosporus bridge on the night of the coup and alleged an attempted coup to overthrow Erdogan’s regime. The impact and effects of the documentary were exceptional and had widespread popularity in the country within a day. These young former-cadet students just talk about the night, the bridge, and the events that just occurred around them. There was nothing political or a kind of hardline comment on anything in the documentary, but the influence of the documentary was tremendous. With this documentary, people started asking the most critical questions loudly like how come these cadet students could be alleged with a coup attempt under such circumstances?

As I always wrote in my commentaries, there is no free media in Turkey, all media outlets are allowed to operate if they accept to become the tutelage of the Erdogan regime in Turkey. Therefore, all the media outlets with all their powers attacked the documentary and tried to discredit it. I can’t say that they succeeded but all their programs and mentions of the documentary unwillingly just made the advertisement of it to a broader audience, and they help the documentary to be more popular in the country. Millions of people watched it on different platforms in the short or full versions of it.

The most interesting thing was that this documentary was harshly criticized by Kemalists and leftists, too. It is not something socking but kind of a ‘what’ moment for everybody. Can Dündar, exiled and so-called independent journalist, criticized the documentary, Blue Bus, and blamed these former cadet students for a thing that is fabricated by the corrupt Erdogan regime and seeing Dündar while using this regime’s rhetoric just make people sick of it. When someone talks to Can Dündar, he says he is an independent, investigative, unbiased journalist but when things come to anything related to the Hizmet Movement, he is different and talks like any other journalists who are working for the Erdogan regime.

He also made a documentary about the July 15 coup attempt titled the Bridge about one year and a half ago, and that was also highly criticized by the people of truth seekers. I also wrote a piece about this documentary at that time. We only found the repeat of the same rhetoric and prejudice about the Hizmet movement and nothing else as it is claimed that his documentary is a production of ‘investigative journalism. And people asked what are your investigation and findings from the claimed research that you said you did if you just repeated the same rhetoric and come to the conclusion that the Hizmet Movement attempted the coup?

People have no difficulty understanding the position of those journalists who allied with Erdogan but, it is difficult to understand why Can Dündar and journalists like him act like puppet journalists of the Erdogan regime and put all universal and journalistic ethics and values aside and biasedly talk about anything related to the Hizmet Movement. This is unacceptable and can’t be explained by anything but prejudice.

The Blue Bus documentary broke the wall that was built by the Erdogan regime with biased and twisted information and lies on purpose and it made a domino effect, too, on Kemalists and let them show their true color about what they think about the coup and whether they are looking for the truth or not. Now, both sides, the Erdogan regime, and Kemalists feared that the innocent of the Hizmet Movement would come out and the people will start sympathizing with them again.

Last but not least, the Erdogan regime and the Kemalists made a dirty agreement to finish the Gulen movement over a staged coup, but they miscalculated the economy and current financial issues at that time and the economy is the biggest problem of today’s Turkey. The documentary made by the former cadet students made this dirty alliance of AKP and the Kemalists more apparent and one thing clearer is that no one cares about the country but just the Hizmet Movement, and that disturbed them a lot, yes the care of the Hizmet people for the country disturbed them a lot, so, they executed the plan of getting rid of the Hizmet Movement no matter what, even the people are killed, is fine for them to reach that end goal. And yes, they did it on July 15, 2016.