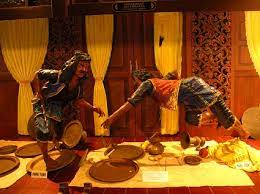 When I was 10 or 11, I wanted to be either Hang Tuah or Hang Jebat.  Or Bruce Lee. For those not familiar with the names, I will skip explaining who Bruce Lee was. One may check his Facebook page to find out who the San Francisco-born Chinese-American-Philosophy-major warrior was. Tuah and Jebat did not have Facebook accounts. Not even LinkedIn profiles.

I worshiped Tuah and Jebat, I even wanted to be both heroes in one – like a Nescafe 2-in-1 coffee sachet sold in a Chinese grocery store in New York.

I would lock myself in my parent’s creaking old wooden bedroom at times, put on my baju Melayu Johor, kain samping, a paper tanjak or headgear, and with my paper-made keris the Malay dagger, I’d be Hang Tuah fighting Hang Jebat. I’d jump up and down the bed yelling words like “Cis bedebah kau! Mati kau!” (You son-of-a machine-gun you! Die you, die!)  before I plunge my keris into myself as I was playing both roles – Tuah and Jebat.  I was not sure which one was a better hero or a better moron of Malacca kingdom times.

Twenty years ago today – I killed both of them. I could not stand them anymore. I learned about their truth.

I renamed them Hang Tuak and Hang Jebon. A rebranding exercse.

Here is the story of the re-branded heroes Hang Tuak and Hang Jebon; the former a warrior drunk with moronism and the latter a gangster and a playboy-warrior. ‘Tuak’ is a Malay word for ‘palm wine’ and ‘Jebon’ is a mongoose.

Hang Tuak was said to be the most loyal and most celebrated Malay hero of 15th century Malacca; a hero endowed with special powers to serve the king. He was said to be a polyglot as well, able to speak multiple languages while able to defeat top-notch fighters from neighboring kingdoms, especially Majapahit.

He was also an expert kangkong eater, able to trick his way into getting a glimpse of the face of a Ming Dynasty emperor by pretending that he was swallowing the Chinese salad heads-up. I suppose the great Chinese sultan looked as pretty as a Hong Kong version of Shah Rukh Khan that no one is allowed to even look at his face.

For Hang Tuak to gain access to that face – that was a most remarkable and celebrated achievement of the Malay warrior when it comes to fine and acrobatic dining. Had he stayed longer and eaten more kangkongs (Chinese spinach,) Tuak would have taken selfies with the supreme ruler of the dynasty, right there in the middle of the middle of the Middle Kingdom.

Hang Jebon was Hang Tuak’s BFF or best friend forever until one day he found out that Tuak was wrongfully sentenced to death by the sultan who loved women and would steal other people’s wives and daughters or even concubines and grandmothers if they look like Marilyn Monroe or Lady Gaga.

Yes, because the sultan was angry that his favorite warrior-terminator did not get to kidnap one Tun Teja of Pahang and instead the fool fell in love with Madam Teja.  (Note: Teja is not to be confused with Madam T, the wife of ‘Mr T’ the African-American TV hero with the mohawk.)

The gorgeous Teja perhaps looked like Katherine Hepburn in Truman Capote’s ‘Breakfast at Tiffany’s’. Tuak was unlucky in that mission impossible and was sentenced to death; maybe to death by tickling till he turned pink and red and then died.

Chosen by the Mandate of Heaven

That was a form of slow death, arguably pleasurable those days before lethal injection. And that was how sultans acted those days. If you are a sultan chosen to rule by the Mandate of Heaven by some Divine Daulat, you could do anything – do good to your slaves or ‘hamba sahaya’ as well as have as many concubines that your harem can accommodate and steal other people’s wife or daughter or steal even royal goats and orangutans.

There were some bad sultans back in the day, mind you. Some may have kept both concubines and porcupines as well.

As god-appointed rulers, you can have all the nice designer clothes you want, sit on the most exquisite diamond-studded throne till you constipate, eat caviar all day, summon the Malay court dancers to even dance like Janet Jackson or have them do the locomotion, and even have 10 gold-plated bullock carts to bring you and your palace gang members around the village-kingdom, reminding people that a sultan can do no wrong and is above the law and that going against them will have you arrested and coconuts will be shoved down your throat, as the mildest punishment.

That was the power the sultans gave themselves. Back in the day, if you laughed at a prince who could not kick the rattan-weaved sepak takraw ball right you could end up dead as well. Maybe stoned to death with a hundred of those hard rattan balls. Those were the days – of the Malay Harry Potter days – when sultans were also carried around the village in what looked like stretchers crafted by the best adiguru (master artisans) with chair design expertise.

One of the sultans even died on a ‘dulang-looking stretcher’ in Kota Tinggi, when he was murdered with a keris by his own laksamana. His story was told as ‘The Story of Sultan Mahmud Mangkat di Julang’. He was an evil sultan who did not like people stealing fruits from his kebun/orchard. Especially buah nangka or jackfruit. He doesn’t care if you are a pregnant woman craving a piece of jackfruit. He does not care jack! As the Americans would say.

Back to the two Hang men – Tuak and Jebon.

So as the legend goes, Jebon was extremely angry and, in the spirit of Che Guevara and the infidel Fidel Castro, decided to revolt and take over the kingdom. Not only the sultan had to go into hiding in some ‘batu-belah-batu-bertangkup-looking’ cave but Jebon was smart, in the tradition of womanizing-smart he learned from the sultans – he took all the sultan’s concubines as well all for himself.

All those Marilyn Monroe, Lady Gaga, Madonna, and even Beyonce and Kim Kardashian and Kaitlyn-Bruce-Jenner looking Malacca concubines were made his. Jebat the silat-smart Darth Vader-like warrior took them all and had a lot of fun in the process of fighting for justice. Fighting for Tuak, his BFF.

It is like today’s ethos – to be a politician means to serve and to steal. And to do this —  big time. Tuak and Jebon were the favorite lakshamanas (‘admirals’)  entrusted to keep the sultans in power and in lust all the time. They were handsomely rewarded.

The legend and nothing more

So, that was the story of the two Malay warriors of Malacca times. That was the legend and nothing more. One cannot even do a DNA testing on those two Hangmen, There is no point in spending time debating ‘cogito-ergo-sum-ness’ of the two. No point using a Descartian logic to prove their existence.

But Hang Tuah and Hang Jebat were my heroes. I love them. Not anymore after they had a name-change: Hang Tuak ‘the forever drunk’ and Hang Jebon ‘the original Malacca gangsta’.  That leaves Bruce Lee and me, myself and I as the two heroes. The Nescafe 2-in-1 me.

Malays of today do not need Tuaks and Jebons as heroes. Malays don’t need to glorify these names and confuse children about what a ‘hero’ should mean. A moron is not a hero. A moron does not think. They follow the money and those with power. We have so many ‘Hang Sapu Habis’ heroes propped up in our midst. They took people’s money, wiped them off clean, and used religion to plead innocence.

The hero is the self – the kingdom within is larger than the one outside – the child that refuses to bow to authority, especially if the authority is based on the system of moronism etched, archived, and embalmed in the past.

That we call tradition and history must be integrated with Philosophy and there is nothing wrong in using the tools of today’s philosophical discourse of what is right and what is wrong in rewriting the past and killing past morons hailed as today’s heroes. That is our task in education for critical consciousness.

Dare we rewrite the history of our own people – so that each of our children will triumph as heroes?

Comprendo? As the radical motor-cycling guy Che Guevara would ask.