The History of Saturday Mothers 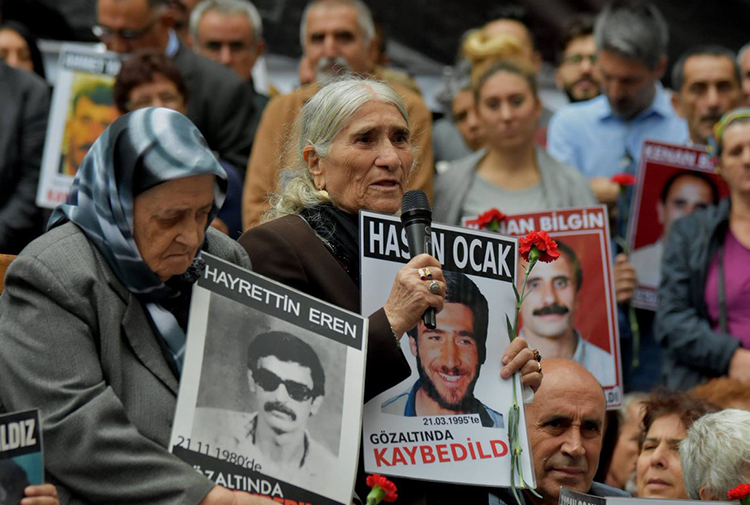 In Turkey, some people have been subjected to the most serious violations of human rights: forced disappearance and death. For the past 737 weeks, a silent protest is held every Friday at 12:00pm at the Galatasaray Square, as the silent cry of those who have disappeared while in custody. Called “Saturday Mothers,” relatives of those who have either gone missing while under arrest or were the victims of unsolved murders while in custody have been asking for justice. They have organized a sit-in protest on Istiklal Street in Beyoglu/ Istanbul every Friday since May 27th, 1995. They have been sitting silently with pictures of their relatives, trying to make their voices heard in the hopes that people will make a stand.

Their request is very clear: no one in the country should go missing again. Those missing should be found, and the people responsible should stand trial. Galatasaray has become a quiet place where people can come together as one, to do something for missing people and join peaceful protests. However, under the orders of the Ministry of Internal Affairs, police officers have been preventing the protests by force for exactly 39 weeks.

The History of Saturday Mothers

The history of Saturday Mothers began with the Gazi Quarter Riots. These riots occurred in a cafe on Gazi Street in Istanbul on March 12, 1995. They started as a provocative gun attack against civilians, organized by a group of unknown assailants. It eventually spread to other part of the country. By March 15, 1995, 22 people had lost their lives, hundreds of people were injured, and a large number of people were arrested as a result of these widespread incidents.

The first person went missing on March 21, 1995. Hasan Ocak disappeared after he was arrested by police following the Gazi Quarter Riots. There were witnesses to his arrest, and his family revolted in order to find their son, to no avail.

Two months after Ocak’s disappearance, he was found dead in the Beykoz Forest, strangled with a wire. For two months since his disappearance, the whole world had heard about his family’s search for him. But the government, which had whisked his corpse to the forensic medicine department and then buried it in a cemetery of the nameless, denied responsibility. On Saturday May 27, 1995, at 12:00 p.m., a group of women started a silent sit-in protest in front of Galatasaray High School. Their objective was to protest Hasan Ocak’s arrest on March 21, 1995, and the fact that he was found tortured to death in a cemetery of the nameless 55 days later.

The idea for this protest came from the Mothers of the Plaza de Mayo, an association of Argentinian mothers that come together in the Plaza de Mayo. Their children disappeared during the military junta period from 1976 to 1983.

In the four years following the first protest, the Saturday Mothers met every Saturday at 12:00 p.m. in the same place. Over time, these human rights advocates, who were asking for justice for the people that had been lost, were dubbed the “Saturday Mothers.”

Support grew quickly. Even the Mothers of the Plaza De Mayo came to visit from Argentina. During the Habitat Summit in 1996, police attacks began. People were arrested and beaten up by the police. The attacks continued for five weeks, but the police pulled back after increased support for the Saturday Mothers. Soon, other parts of the wo Nevertheless, the Saturday Mothers were prosecuted for obstructing the orders of a police officer and violating the laws of assembly. People were beaten up mercilessly for nothing but taking part in peaceful gatherings. They were dragged on the ground by their hair. Tear gas was thrown into the cars that they were roughly stuffed into. Their rights of looking for missing people and peaceful protest were ignored and violated. Many trials of the protestors were held over the course of several years. After the attacks received backlash from the public, the government ordered the police to stop.

Instead of revealing their knowledge of the missing people, at the beginning of 1997 the government sent a bus where people could officially request an investigation into their missing relatives. However, official applications had already been completed for every missing person. This show for the media did not continue much longer, as the families of the missing people did not give it much attention. According to applications made to the Human Rights Foundation and the data from the 543rd Human Rights Association, since 1980 in Turkey there have been 940 reports of people who have gone missing while under arrest, most of which were classified as having taken place during a state of emergency. No information has been found on any of these 940 missing people.

The government was bothered simply by the existence of the people who were looking for their missing loved ones. The government tried to prevent them from walking on the street, from talking, and even tried to take away the carnations of remembrance from their hands. Nevertheless, the Saturday Mothers did not give up, to preserve the memory of those who were lost. They suffered so that the missing people would be found and those responsible would face prosecution.

The Saturday Mothers became the face of civil disobedience in Turkey. Their main requests were for the fates of the missing people to be revealed and for those responsible to be punished. They also requested modifications to the Turkish penal code to make forced disappearance a crime against humanity. In addition, they wanted Turkey to sign the United Nations Convention on the Loss of Custody.

In Turkey during 1995, a large number of citizens were kidnapped in Toros cars belonging to the government. Many of the people who were forced to get in those cars never returned. A subject of shame in the 1990s, white Toros cars have now been replaced by black Transporters. In the Turkey of President Recep Tayyip Erdogan, who sees the July 15, 2016, coup attempt as ”a gift from God” and says that “if it was a dictatorship they would come and take the man away”, many people have been kidnapped.

According to a statement made by Omer Faruk Gergerlioglu, a member of the Turkish Parliament and a human rights advocate, the kidnapped people are being tortured in order to obtain false confessions.

After the failed coup attempt, a total of 24 kidnapping cases have occured. Members of the Parliament, including Sezgin Tanrikulu of the Republican People’s Party from Istanbul, Senal Sarihan of the Republican People’s Party from Ankara, and Omer Faruk Gergerlioglu of the Peoples’ Democratic Party from Kocaeli have posed parliamentary questions on this matter. The questions have not been answered.

With one exception, there has been no news from any of the kidnapped people. So who kidnapped them? What is their condition at the moment? Are they alive? No one knows the answers to these questions. Neither the governorship nor the police reply to missing person reports. Families want their missing loved ones to be brought to court alive.

The Saturday Mothers protests began so that no one in Turkey would be illegally detained, missing persons would be found and the people responsible would be prosecuted. Sadly, due to the fact that government officials have not done anything to solve this problem over the course of a quarter of a century, a new tragedy occurs every day.