The Pastor is Not the Only U.S. Hostage in Turkey 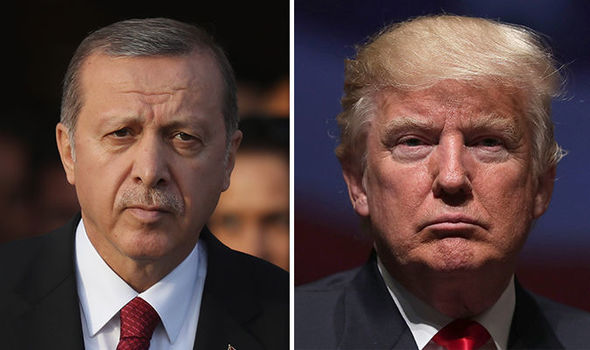 Turkish-American relations are at a boiling point. This month, the United States not only issued Global Magnitsky sanctions against two Turkish ministers, it also doubled tariffs on steel and aluminum from Turkey, sending the lira into freefall. These measures were Washington’s official response to Ankara’s imprisonment of North Carolina pastor Andrew Brunson for almost two years under farcical charges.

Both President Donald Trump and Vice President Mike Pence have incessantly invoked Turkey’s treatment of the pastor, notably when announcing the punitive measures. On Wednesday, National Security Advisor John Bolton went a step further, saying that the diplomatic crisis “could be over instantly” if Turkey “did the right thing as a NATO ally…and release pastor Brunson without condition.” All of this has left the Turkish public wondering how the case of a single cleric merited a showdown between two NATO allies.

The White House’s strategy to free Brunson and resolve the crisis has failed in part because it singles out the faith leader. In fact, Brunson is only one of many pawns in Erdogan’s “hostage diplomacy,” a strategy of imprisoning Western nationals to extract diplomatic concessions. Besides Brunson, the Turkish president’s victims include jailed NASA physicist Serkan Golge as well as chemistry professor Ismail Kul, whose trial continues in Turkey. Ankara has also put behind bars three Turkish employees of the U.S. mission in Turkey — more targets of Erdogan’s anti-American campaign.

The double standard in U.S. policy is not lost on the victims. For both moral and strategic reasons, Washington needs to treat all American victims of hostage-taking as equal priorities, and show that it stands behind all its citizens and diplomatic staff.

A Tale of Two Scientists

Two summers ago, more than 250 Turks died in the course of a failed coup attempt. Turkey officially blames the July 2016 putsch on a shadowy religious network comprised of followers of Fethullah Gulen, a U.S.-based Turkish cleric. Although Gulen was one of Erdogan’s closest political allies for a decade and rose to prominence thanks to Erdogan’s support, the two had a falling out in late 2013. Since then, Turkey has designated Gulen’s global network as the Fethullahist Terror Organization (FETO), and accuses it of masterminding countless sinister plots. According to the government’s logic, Gulen’s residence in the United States since 1999 amounts to clear evidence of CIA fingerprints on the 2016 coup plot. By extension, any U.S. citizen who resides in or travels to Turkey could be a potential CIA operative seeking to destabilize the country.

When the 2016 coup unfolded, Serkan Golge was on vacation with his family in the southern Turkish province of Hatay, near the Syrian border. But the day the family was preparing to head back to Houston, where the 37-year-old Golge studies the effects of radiation on astronauts, the police came knocking at Golge’s parents’ house. A distant in-law who had only met Golge twice in his life informed the police that the physicist might be an American spy. Later in court, the informant admitted he has no evidence against Golge, and stated that “since the suspect works in the U.S., I informed the police based on my guess that he might be working at the CIA.”

When the police searched the home, they found the only “concrete” evidence against Golge: a $1 bill in “a scrapbook-like box, filled with souvenirs from travels, in his brother’s room.” Turkish authorities claimthis is evidence of membership in FETO, as Gulen is believed to have distributed dollar bills with specific serial numbers to his followers. During Golge’s 14-day detention, Turkish intelligence approached him six times to recruit him as an informant. Golge was then sent to solitary confinement, while his wife and two children were barred from leaving the country. This past February, after 18 months in pretrial detention during which authorities denied Golge any U.S. consular access, a Turkish court sentenced him to 7.5 years of jail time.

The same month the police came for Golge, another American scientist, Ismail Kul, was visiting his family in the city of Bursa in western Turkey. Kul’s guilt was self-evident: He was a professor at a university in Pennsylvania, where Gulen himself resides. Moreover, Kul admitted at trial to meeting the cleric in 2010 — but only, he explained, after a senior parliamentarian from Erdogan’s own party arranged the meet-up by luring Kul over to Gulen’s estate. This January, the court released Kul on bail, but he is not permitted to leave Turkey.

While Golge and Kul, no less than Brunson, are victims of the Turkish government’s bizarre paranoia, the scientific community’s advocacy for these scholars has been dwarfed by religious organizations’ lobbying on behalf of Brunson. The United States Commission on International Religious Freedom, a federal government body, has held several congressional briefings on the case of Brunson, and the pastor’s plight has made it into pending legislation, in addition to the Trump administration’s punitive measures. In contrast, Kul is absent from and Golge is rarely mentioned in congressional press statements — or in presidential tweets. The only official letter on Golge’s behalf came from the U.S. Helsinki Commission nearly a year ago. Notably, however, Philip S. Kosnett, then the chargé d’affaires at the U.S. embassy in Ankara, visited Golge in prison in June.

Golge’s wife lamented in an NBC interview last month, “When I read the newspapers, I feel frustrated sometimes like they’re only trying to save Brunson but not us.” Similarly, Kul has wondered whether the disproportionate attention on Brunson has to do with the pastor’s faith, asking, “should I change my religion?”

Given that Golge has become an afterthought (and Kul not even that), it is not surprising that the three imprisoned Turkish employees of the U.S. mission in Turkey have not become a cause célèbre, either. Ankara has also charged them with membership in a terrorist organization — either FETO or the U.S.-designated insurgent group, the Kurdistan Workers’ Party (PKK). Their detentions provoked a brief backlash last fall from the U.S. embassy in Ankara, which imposed a visa ban on Turkish citizens until the cessation of assaults against its consular staff. Ankara retaliated in kind and was ultimately able to manage the crisis and normalize relations within months — without making any concessions. The employees remain imprisoned, eliciting no fire and fury from the Trump administration, despite their ample record of service to the State Department.

Hamza Ulucay was the first of the consular employees to be taken into custody. For 36 years, he had worked as a translator for the U.S. consulate in Turkey’s southern province of Adana, which also hosts a key U.S.-Turkish airbase, Incirlik. On Feb. 23, 2017, Turkish counter-terrorism police came for Ulucay due to his alleged connections to the PKK. After detaining him for about two weeks, the court finally released him on probation due to lack of evidence. But the respite didn’t even last for a day: A prosecutor reportedly objected to the decision, and just a few hours after his release, the police were back to formally arrest Ulucay on March 7. As if the allegations about Ulucay’s Kurdish-nationalist sympathies were not enough, the police also declared that they seized 21 $1 bills in Ulucay’s house, insinuating a connection to FETO, an archrival of the PKK. Authorities are demanding a minimum 7.5-year prison term, with a possibility of up to 15 years.

The Turkish government did not stop there. About six months after Ulucay’s arrest, they came for a second consular employee. Metin Topuz had been working for the U.S. Consulate General in Istanbul for more than 20 years when the police came to detain him last October. He was accused of espionage as well as coup-plotting, another code name for membership in FETO. The police based their accusations on Topuz’s connections to a former prosecutor and police chiefs who had also been linked to Gulen. But as John Bass, America’s then-ambassador to Turkey, noted, these connections were a routine part of Topuz’s work as a liaison for the U.S. Drug Enforcement Administration.

Days later, authorities came for another consular employee in Istanbul: Nazmi Mete Canturk. Unable to locate him in his Istanbul home, the police ordered a search of his wife’s family’s residence in the northern Turkish province of Amasya — and detained his wife and daughter, both accused of FETO membership. They were imprisoned for more than a week and released ahead of a U.S. delegation’s visit to Turkey. Eventually, Canturk turned himself in to the authorities, who placed him under house arrestafter questioning him about his contacts with the Gulen movement, including on the activities of his wife’s bank account in a Gulen-linked Islamic financial institution, Bank Asya. His case remains unresolved.

While Ulucay, Topuz, and Canturk are not citizens, the United States should not treat their cases as separate from those of Brunson and other U.S. nationals. Alarmed by Washington’s apparent reluctance to advocate for these foreign service nationals, Henri J. Barkey, a former member of the U.S. State Department Policy Planning Staff, and Eric S. Edelman, former U.S. ambassador to Turkey, recently called for resolute action. They warned that Washington’s failure to act could “cripple the State Department’s ability to represent America overseas.” Even worse, they cautioned, Erdogan’s hostage-taking tactics could inspire other authoritarian regimes.

As Washington now steps up pressure on Ankara with unprecedented sanctions for a resolution to Brunson’s detention, it should not forget about the other Americans and U.S. government employees who remain behind bars under similarly dubious charges. It is clear that Ankara’s newfound hostage diplomacy targets not only Christian faith leaders, but American citizens and staff more broadly. If Washington only stands up for the pastor, Erdogan will draw the lesson that he can persecute others with impunity. When pushing back against Erdogan, the United States should clearly state the Turkish strongman’s offense, which is not the detention of a single pastor but, rather, the systematic targeting of U.S. persons in the service of an ill-devised strategy of hostage diplomacy.

The article firs appeared on August 23, 2018 at warontherock.com

Aykan Erdemir is a former member of the Turkish parliament and a senior fellow at the Foundation for Defense of Democracies, where Merve Tahiroglu is a research analyst. Follow them on Twitter @aykan_erdemir and @MerveTahiroglu.