The Project of North and East Syria 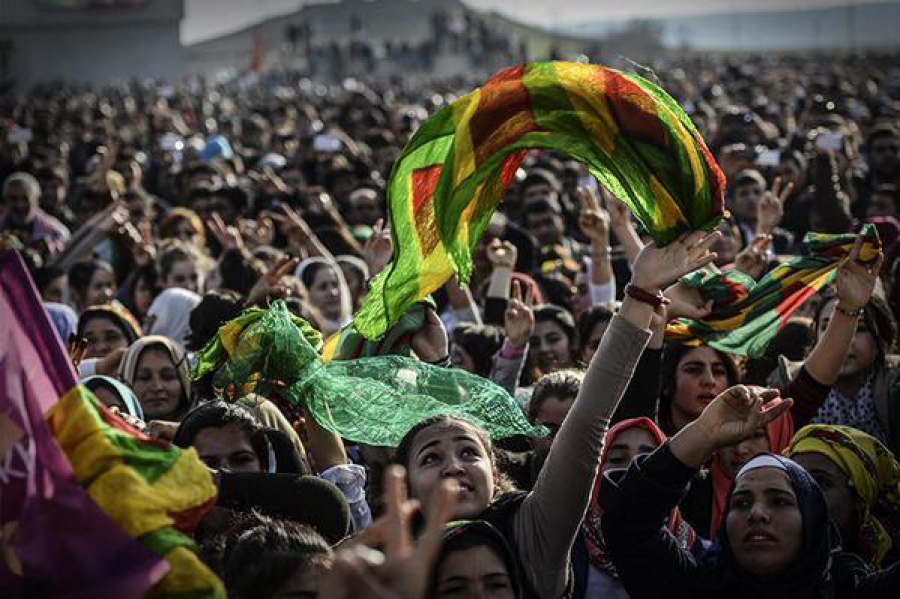 North and East Syria (NES) comprises the mostly Kurdish populated regions of Jazeera (Qamishlo and Hasakah cantons), Kobani, and Afrin, as well as Arab majority cities — Raqqa, Tabqa, Manbij, and Deir Ezzor. The region was formerly called “Rojava”, which means West Kurdistan in Kurdish. It was renamed to reflect the region’s multiethnic character. NES is protected by the Syrian Democratic Forces (SDF), America’s ally in Syria, which includes Arabs and Kurdish militias as its core.

NES is much more than a geographic region. It is governed by a progressive system of self-administration, unique in Syria and the Middle East. Grass-roots democracy is a defining characteristic of NES. Local councils are comprised of diverse ethnic and sectarian communities, including Kurds, Arabs, Yezidis, and Christians.

Gender equity is standard. A co-presidency system ensures that leadership positions are shared by men and women. Equal representation is required at all levels of administration. Women have conspicuous roles in the security apparatus. The People’s Protection Units (YPG) work closely with the Protection Units of Women (YPJ). When ISIS attacked Kobani, 40 percent of the casualties were women.

Ecology is another pillar of the NES project. The Baath Regime focused on maximizing resource exploitation and agriculture at the expense of environmental protection, which led to deforestation, and forced Kurdish farmers to migrate to cities and seek jobs as laborers. NES has adopted policies seeking environmental sustainability in order to correct this problem.

Beyond a geographic region and a system of governance, NES is a state of mind and a state of being.

Residents of NES have a strong sense of community. Its diverse peoples come together to advance the goal of a peaceful, prosperous and harmonious society.

NES is, however, no Shangri-La. It is a new democracy, with lots of room for improvement. For example, it needs more political dissent and to improve its neighborly relations with Kurds in Iraqi Kurdistan.

NES is on a razor’s edge. It is extremely vulnerable, surrounded by adversaries: ISIS, Turkey, and the Syrian regime of Bashar al-Assad. Armed people’s protection forces are ubiquitous in the towns and cities of NES.

Beginning in 2012, Kurds, Yezidis, and Christians were attacked and slaughtered by ISIS and other jihadi groups. The United States subsequently found common cause with the YPG/YPJ. The SDF acted as the point of the spear in liberating Raqqa, the self-proclaimed capital of ISIS. More than 600 SDF members died in the battle.

The US and NES share other strategic interests. NES, as a secular state, is a bulwark against Iranian influence in Syria.

There is no amity between NES and the Alawite-dominated regime of Bashar al-Assad. Syrian Kurds have a history of marginalization and disenfranchisement under his father, Hafez al- Assad. The Pan-Arab Baath Party resettled and denied citizenship to hundreds of thousands of Kurds. As stateless people, they are denied access to education and employment. They cannot own property or even get a marriage license.

Kurdish cities in NES has been largely unscathed by Syria’s civil war. From its outset in 2012, Assad focused on more urgent security challenges. Syrian forces withdrew from the North and East to fight Sunni Arab insurgents in Ghouta, Aleppo and elsewhere in the country.

Kurds and the Syrian government have achieved a modus vivendi; Kurds do not threaten Syria’s sovereignty. They prefer autonomy and other forms of power-sharing in Syria’s future constitution, which would devolve authority from Damascus to Syria’s regions. UN-sponsored peace talks, a failure to date, do not include the Syrian Kurds. Their participation is blocked by Turkey.

President Erdogan is openly hostile to Syrian Kurds. He refers to the YPG/YPJ as a “terrorist organization.” He insists they are one in the same as the Kurdistan Worker’s Party (PKK), which has been struggling for greater political and cultural rights for Kurds in Turkey. Since the mid-1980s, about 40,000 people have died in Turkey’s war with the PKK.

Erdogan is expanding operations, targeting Kurds in Syria. On January 20, 2018, Turkish war planes launched a 58- day bombardment of Afrin, an oasis of peace in Syria near Turkey’s border west of the Euphrates. The unprovoked attack killed hundreds and displaced more than 300,000 people. Erdogan has been criticized for ethnic cleansing and a campaign aimed at changing Afrin’s demography. He wants to fulfill a long-held ambition of Turkey to create a security belt all along Turkey’s 500-mile frontier with Syria.

During my recent visit to NES, I was surprised to see so many images of Abdullah Ocalan, the PKK leader. His image is often portrayed on billboards with photos of fighters who have died in battle. Ocalan has been in jail in Turkey since 1999, but remains an inspirational force for the movement.

For sure, the PKK and Kurds in Syria have a strong intellectual and spiritual connection. The NES project is largely inspired by Ocalan’s progressive teachings. Ocalan describes a society organized horizontally, as opposed to the hierarchical system that exists in Turkey, Iran, and Iraqi Kurdistan. His followers maintain that the NES project is the best antidote against Islamism and extremism.

Under US law, the US Government is forbidden from security cooperation with terror groups. The US has extensive security cooperation with the YPG/YPJ, which includes the provision of weapons and air support. About 2,000 US Special Forces are based in northern Syria where they coordinate anti-ISIS activities. Given the YPG/YPJ’s critical role in the global coalition against ISIS, the US keeps them off the terror list. The US Government does not classify the Democratic Union Party (PYD), the political wing of the YPG/YPJ, as a Foreign Terrorist Organization (FTO). Successive US administrations have concluded that the PKK and the YPG/YPJ are operationally and financially distinct.

Erdogan is enraged. Turkey attacked Afrin, an oasis of peace in western NES, on January 20, 2018. Turkey threatens Manbij and other communities East of the Euphrates. James Jeffrey, the US Special Envoy for Syria, recently testified that it is “unacceptable” for Turkey to attack US-allied Kurds in Syria. US Special Forces are establishing 5 posts along the Turkey-Syria border as a trip wire against aggression.

NES provides a positive example to other Syrians, and could influence the course of negotiations over Syria’s future. It is also critical to the global coalition against ISIS. The United States has compelling security and political reasons for maintaining its cooperation with NES.