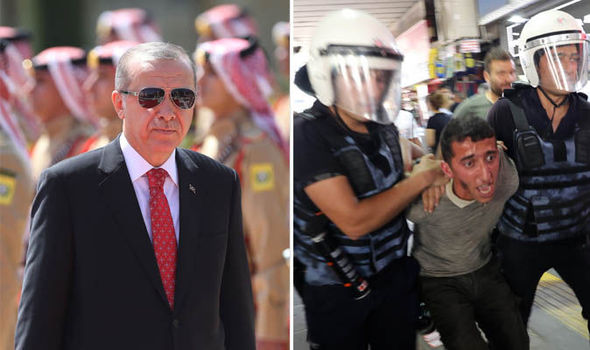 The majority of the U.S. Senate sent a letter to President Biden to press the Turkish Government to take necessary steps to improve its human rights record.

“President Erdogan’s foreign policy has also grown more belligerent and combative over time. In recent years, he brazenly attacked U.S.-backed Kurds fighting ISIS in Syria, he purchased Russian air defense systems despite warnings that they were incompatible with U.S. technology, and he encouraged Azerbaijan to use violence to settle a territorial dispute with Armenia,” the senators wrote. “President Erdogan has also attempted to pressure the U.S. and other countries into extraditing Turkish nationals, whom he blames for the failed coup in 2016. The Erdogan government has sought to silence critics in the United States like Enes Kanter, an NBA player and human rights advocate, by going after his family in Turkey and placing an INTERPOL red notice on him.”

The senators note that the United States has a significant opportunity to influence Turkey’s troubling human rights record because it’s an important ally in a key region of the world.

“We believe that the United States must hold allies and partners to a higher standard and speak frankly with them about issues of human rights and democratic backsliding,” the senators wrote. “We urge you to emphasize to President Erdogan and his administration that they should immediately end their crackdown on dissent at home and abroad, release political prisoners and prisoners of conscience, and reverse their authoritarian course.”

Since the 2016 coup attempt, 150,348 government officials were dismissed from their jobs, 96,885 people arrested, 3,003 schools, dormitories and universities shut down 6,021 academics lost their jobs, 4,463 judges, prosecutors were fired, 189 media outlets were shut down.

About 300,000 people have so far been detained in relation to the coup attempt while courts have handed out more than 2,500 life sentences and according to Turkey’s defense ministry figures, over 20,000 people have been expelled from the military.

Selahattin Demirtaş, former co-chair of the pro-Kurdish Peoples’ Democratic Party (HDP), remained in prison despite a very recent repeated call of the European Court of Human Rights on Turkey to release him immediately. The court first made a ruling for his release in November 2018.

Since Erdogan consolidated his power and increased authoritarianism in Turkey, he gradually distanced Turkey from democratic principles, the United States and E.U.

Turkish government intensified crackdown on members of pro-Kurdish People’s Democracy Party (HDP), whereby more than 1,000 members and administrators were detained and more than 170 of them arrested. This brought the number of HDP-related detainees to 20,000 against 10,000 arrests.

Enforced disappearances which are serious crimes under international law and are prohibited at all times have been routine in Turkey.

In its annual human rights report, released on March 11, 2020, the U.S. State Department documented violations by the Turkish government, including arbitrary killings, suspicious deaths of persons in custody, forced disappearances, and torture. Along with similar findings in last year’s report, the latest assessment shows that systematic violations of human rights continue with impunity under President Recep Tayyip Erdogan.