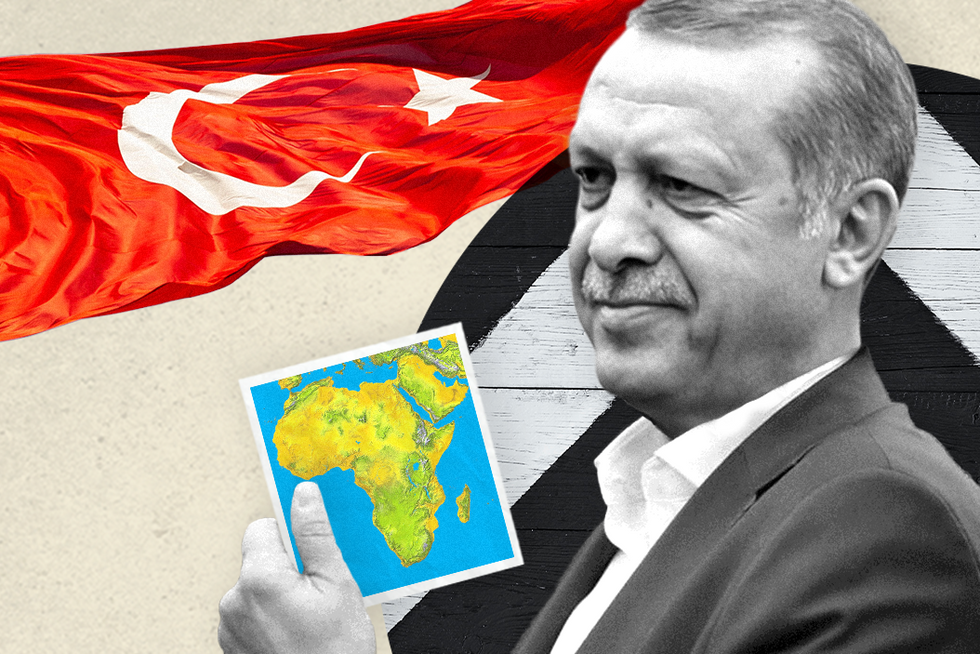 Phonetically, a mention of the word “TIKA”, also appearing as “TICA” in some documents about the Republic of Turkey’s active foreign policy and global cooperation mechanism, would ring into minds an assortment of memories, depending on recipients’ nationality, language, faith, exposure, profession, occupation, location, hobby, mention it.

To those close to English literature, it could straight away send a message of a slang for the heart – that “ticker” — which never stops pumping the vital blood supply to every tissue in the human body system. To this “ticker” organ, there is no peripheral part of the human body. All tissues, wherever their location, are equally important and served promptly.

Global financial experts could dig themselves deep into the history and practice of “stock tickers” – machines which have continuously released updates on prices of certain securities throughout the trading season since the early days of the New York Stock Exchange in 1887; adopting every technological advance as they emerge all the way into the digital age.

Those engulfed in a watch collection hobby could whet the palate over their horde of “ticker” types, comprising those related to movement (automatic, quartz, solar and chronometers); display type, including analog, digital, hybrid and touch screen; function and style type, the likes of dive, chronograph, military, pilots, dress, and smart watches.

From the African perspective of oversimplifying issues such that every fuelling station is called ‘Shell’ and graphic designers and sign writers are paid handsomely to invite customers to a ‘saloon’ (not salon) for a haircut or a ‘stationary’ (not stationery) office for secretarial services, one could even deviate into “tick-borne” diseases spelling death to indigenous cattle and negatively impacting the livelihoods of household members.

Chronicles show that TIKA could, in fact, mean anything from a crater on Saturn, a village in Estonia, a character in the Dragon Lance series of fantasy novels, a refugee zone in a Uganda refugee settlement to a music band in Indonesia or a Buddha festival. What’s in a name?

But, to be or not to be, what does Turk Isbirligi ve Koordinassyon  Ajansi Baskanligi –Turkish Cooperation and  Coordination Agency or Turkish International Cooperation and Development Agency — stand for? Over about three decades out in the field, what constitutes its co-operation, coordination and development functions? For this, one has to trace TIKA roots (history, mission and vision), monitor and evaluate its activities, and analyze its status in terms of the global society because, in essence, it is (should be) international.

On a light touch history note, it all started with a special 1991 Christmas Day ‘present’ in the collapse, dissolution, or disintegration of the Union of Soviet Socialist Republic (USSR). Put very, very briefly, operationally, the USSR was like a federal union of multiple national republics.  On that Christmas Day, Mikhail Gorbachev resigned, and all republics emerged from this event as independent states.

What was taking place on the ground in the Soviet Union is not a subject of this analysis. Nor, if Turkish leaders of the day saw this as a “Gift from God” in the way President Recep Tayyip Erdogan, 25 years later, came to visualize the home brewed planned to fail July 15, 2016 attempted coup in which Muslim cleric Fethullah Gulen is held as a scapegoat.

African indigenous knowledge observes: “If it (the cow) has fallen, slaughter is the requisite step.” So, Turkey saw the USSR collapse as an opportune time for partaking in restructuring the development of the new Turkic republics, the likes of Azerbaijan, Kazakhstan, Kyrgyzstan, Tajikistan and Uzbekistan with which it shared common history and cultural traits. In the short run, this entailed jumping on the wagon of the almost vertical World Bank and International Monetary Fund (IMF) intervention programmes.

Looking beyond the screen, the ‘TIKA spirit’ towards the new republics —the nature notwithstanding — started in earnest in 1992, seven years before the institution’s statutory establishment in 1999 and subsequent being formally entrusted to the Ministry of Foreign Affairs in 2001.

A decade later, world and Turkish affairs had undergone such changes that a bigger chunk of Turkish support was going to Africa under a two-tire guide of conflict and poverty. There is enough evidence to prove that Turkey has mounted expansion programs in Sahel, the Sahara and West Africa to achieve its objectives revolving on the axis of establishing influence in this strategic part of the continent.

For this endeavor, Somalia, hosting a Turkish military base, plays the pivotal role of a gateway to countries like Burkina Faso, Chad, Ivory Coast, Equatorial Guinea, Gambia, Mali, Mauritania, Niger, Nigeria, Senegal and Togo. What does one make out of reports that 229 senior leaders of terrorist organizations from the Al-Nusra Front and Daesh were sent by Turkey to Libya? What could prevent them from proceeding to other African countries?

There is a paramilitary organization going by the name of SADAT Corporation, conducting military training for many African forces and armies besides striking military deals. The problem here lies with how Turkish President Erdogan and the owner, Adnan Tanriverdi, are systemically aligned for Africa.

On the one hand, for example, Turkey in 2018 ostensibly contributed five million US dollars to finance G5 Sahel force to combat terrorism.  But, on the other, the equation of Adnan Tanriverdi, former chief military aide of Erdogan, is at variance. He holds that Turkey must support terrorist organisations against what he calls state terrorism in some regions and countries in Africa – such as Nigeria, Mali and Central Africa.

This module is in use. Libya is a typical case. Erdogan in the Libya conflict supports the UN recognized government.  At the same time, intelligence reports reveal that as of February 2020, up to 4,700 mercenaries financed by Ankara were in Libya while 1,800 were training in Ankara, 64 arrived from Europe and dozens had fled to Europe, Italy in particular. Ankara also sent 900 operatives to join Islamic state (IS) in northwestern Mali.

The darkest side of the story is that Erdogan has got into the habit of hiding his unbecoming behavior under TIKA, whose vision, mission, values and statutory responsibilities don’t tally with what is taking place.

A very good example is in a revelation connecting Palestine’s Hamas with TIKA.  A usually reliable source revealed: “As far as I recall,  I went to Gaza  three or four times and each time I withdrew  $20,000 from the (state-run) bank and gave it to Bulent Korkmaz (former TIKA representative in Palestine and) an associate of  Ismael Haniyek, former deputy chief of Hamas political bureau.”

After Israel investigations established this dirty game leading to arrests, prosecution and conviction of jihadist Foundation for Human Rights and Freedoms and Humanitarian Relief (IHH) personnel, Korkmaz left Palestine and returned to Turkey. The money went unaccounted for and was designated to cover travel and meal expenses, which wasn’t true.

TIKA personnel have been proven to participate in spying on Turkish citizens living and working in foreign countries, which is against all ethical practices of a cooperation and aid organization. This translates into TIKA assuming Turkish Intelligence Organization (MIT) duties. So, could TIKA have a hand in Turkish citizens deemed dissidents, at worst, being kidnapped in foreign countries and sent back to Turkey? What sort of development and cooperation aid is that?

It is no wonder that global aid programmes analyzing organizations are of the opinion that despite Turkey showing positive ODA/GDP ratios, TIKA lacks transparency. And it can’t be. Not along the lines of withdrawing unaccounted for money from state-run banks and spending it on ulterior motives such as sponsoring terrorism under the guise of controlling it. In such a way, TIKA goes beyond what is called double standards. Theirs is ‘multi’, if one could be allowed to twist the English language concept a little. TIKA must live along accepted global standards for organizations of its type. It must not be the path for Erdogan’s ill motives.