HomeExpertsTime to Act for the Refugees in Greece and the Babies Growing...
ExpertsTop Stories On Turkey 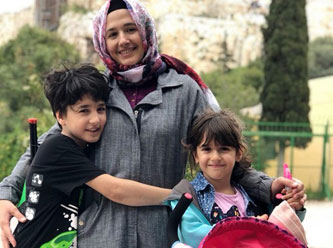 A person who has been forced to leave their country because of his/her religion, race, affiliation with a certain social group, and political views etc. is called a refugee. Rights of the refugees such as employment, sheltering, healthcare, education, and freedom of action are under the protection of the country where they are located. In order to explain the people what the refugees are going through, who have been forced to leave their homes and countries in order to run away from conflicts, wars, tortures, and genocide, World Refugee Day is held every year on 20 June.

According to the report published by the United Nations High Commissioner for Refugees (UNCHR), 1 out of every 122 people in the world is under refugee status. The total number of refugees in the world is around 70 million and 32 more is being added to this number every single day. Syria, Afghanistan, and Somalia are the countries which draw the most refugees out, while Germany is the European country that accepts the most refugees. On the other hand, Turkey keeps his place for hosting a record number of refugees. According to the official numbers, Turkey hosts 3.6 million refugees, and unofficial numbers reveal that there are some 6 million Syrian citizens are currently being sheltered in Turkey.

To bring up the children to the agenda, who carry the weight of the world on their shoulders because of inequality and wars, the World Conference for the Well-Being of Children was held in 1925 in Geneva. United Nations signed the Convention on the Rights of the Child on 20 November 1989. Since this date, 20 November is being celebrated worldwide as the Universal Children’s Day in order to keep the violations of the children’s rights on the agenda. The convention, which is signed by 193 countries, consists of 54 articles. It is also the convention which is signed by the most countries and come into force within the shortest time in the history of United Nations. The convention, which is based on providing the children a healthy and secure life regardless of their religion, language, gender, race, and social status, consists of timeless liabilities. In order to control the regulations and changes done by the countries those signed the convention, a Committee on the Rights of the Child is established to be assembled every five years.

Extrajudicial practices have been carried out in Turkey, especially against the members of Gulen Movement, such as arresting people, seizing companies, and shutting down educational institutions. The women in The Republic of Turkey is being accused of staging the unsuccessful coup attempt in July 2016. The arbitrary arresting of pregnant women, and mothers with children has ruined the lives of thousands of families. Healthcare benefits of the families, who were dismissed from their professions, were suspended. Therefore, the people who have serious diseases, disabilities, and the sick children were not provided with any kind of healthcare. The right to health of thousands of mothers during and after their pregnancies are violated and this eventually effects the lives of innocent children. Tens of mothers had a miscarriage because of torturing and tough conditions. Most of the imprisoned women are still waiting for their bills of indictment to be prepared.

Gamze Ilgezdi, the Istanbul deputy of Republican People’s Party and a member of The Human Rights Investigation Commission, had brought the all-out slaughter against The Gulen Movement to the Parliament’s attention back in November 2017, requested everybody to take action for 668 babies in prison. She stated during her speech in the General Assembly, “The children’s right to live is a subject above politics. There are 668 babies, 149 of which are younger than one year old, in prisons today.  Come and let’s talk together about what we can do about this matter.” The trending hashtag #668babies in social media is based on the data revealed by Ilgezdi.

What Law Says About Juveniles in Prison?

The data of the pregnant women, and the women who had lost their children, which must be revealed in accordance with the data published by the Turkish Statistical Institute (TUIK), do not exist.  This situation is a neglect of duty. And the paper over the data in order not to reveal the information constitutes another crime. The statutory of provisions are not being carried out in Turkey. Law on Criminal Execution, article number 5275 dictates: “The execution of the prison sentence against a woman who is pregnant or who gave birth less than six months ago shall be postponed.”

On the other hand, United Nations Convention on the Rights of the Child and many other international conventions, and also the Article 41 of the Constitution are being violated. Article 41 dictates, “Every child has the right to protection and care and the right to have and maintain a personal and direct relation with his/her mother and father unless it is contrary to his/her high interests. The State shall take measures for the protection of the children against all kinds of abuse and violence.”

When if not Now?

Demonstrations with black balloons and banners were made around the places where important buildings, squares, and memorials exist in many different countries on 28 October last year in order to make the world hear about the status of the women and children. The same campaign is planned to take place on 17 November this year in the world in order to remind what is happening in Turkey and to celebrate the Universal Children’s Day. The Turkish people in the US, Canada, and Europe will be gathering in order to protect the rights of their children in their countries. The participants, who have already obtained legal permissions for the demonstrations they will be making in the countries they reside, had raised voice on 28 October last year with black balloons.

Furthermore, on Saturday, 17 November 2018, the volunteers of Set Them Free, and Advocates of Silenced Turkey will be gathering for the rights of the mistreated children in Turkey. The purpose of this demonstration is to raise awareness about the troubles of the children living both in Turkey in accordance with the prohibitions of the United Nations Convention on the Rights of the Child.

The association of Moonlight started a help campaign for the refugees who were forced to leave their countries and found shelter in Greece. The donations collected through the website www.mydonate.bt.com will be forwarded to Greece on 17 November and will be directly given to the refugees against receipt personally by the managers of the civil society organization and journalists. Furthermore, the public will be briefed about the campaign with a press release.

The volunteers, who carry out both campaigns simultaneously, request everybody to organize a demonstration and financially contribute to the campaign on 17 November. They request the freedom of the innocent children, and their rights to be secured, who are in prisons in Turkey and already isolated from society. They also request others to publish and share what happened in social media. Thus, the campaign will have more influence and will be able to receive more donations. The aim of the campaign is to collect £100.000 for the refugees.

Brochures prepared for 668 babies and more information can be found at babiesinprison.org

Deniz Zengin is a journalist and doctoral researcher focusing on refugees and immigration.