HomeHeadlineTurkey 2016 coup and Erdogan’s fatal lie of the century? (2)
HeadlineTop Stories On Turkey 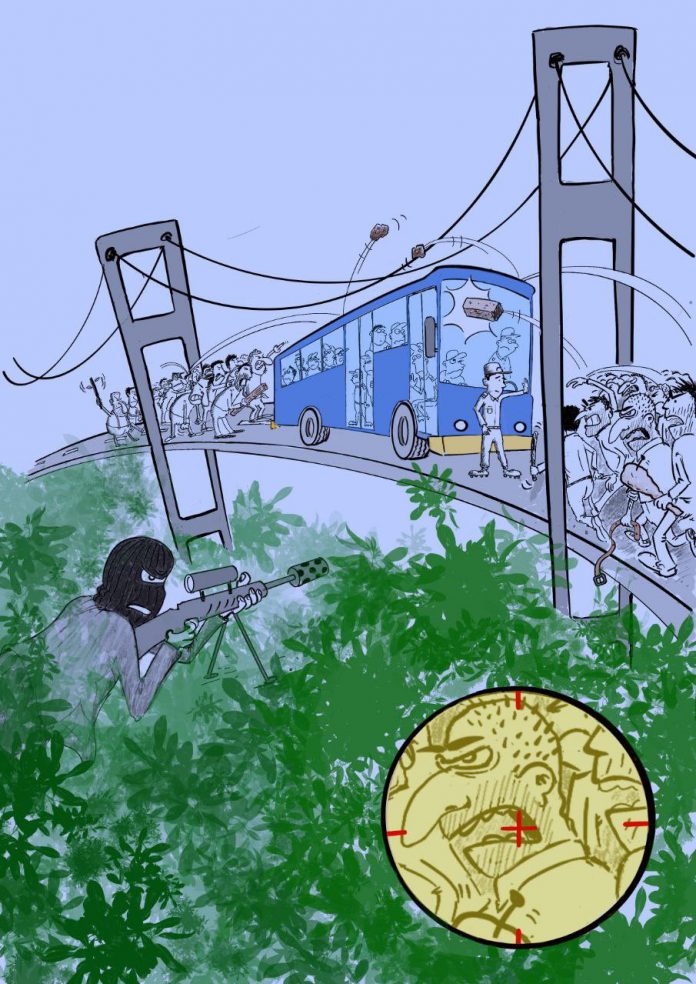 Life is the most valuable property on every living creation, whose future continuation and sustenance fundamentally builds on the young members. In every country, the military not only deserve but should be accorded highest respect due to the call and nature of their duty. The servicemen and women take oath to sacrifice their lives for the good of their country.

From this perspective, it is, therefore, a disgrace for Turkey’s President Recep Tayyip Erdogan and the ruling Justice and Development (AKP) Party to have a hand in what happened to the 20-year-olds or so Turkish Air Force Academy cadets judging from the implications of revelations made in The Blue Bus documentary.

In the documentary, six of the Turkish Air Force Academy cadets, among those who survived a Bosporus Bridge ambush during the night of the controversial July 15 2016 coup, display their innocence in the act to the level of making a strong case for a dishonest country leadership.  The 44-minute ‘production’ leaves one wondering why all that is recorded had to take place, leading to the present vivid unpleasant life for the Turkish people at home or living abroad in self or forced exile.

Maybe, if the six cadets could have had some level of investigative journalism and film producer skills we could have had a more in-depth production.  Given their age and professional handicap, The Blue Bus script has to be read between the lines for better understanding.  But the story is told. The six, minus Halit Tunc, in respect of whom I managed to get some particulars, with their ages at the time of the coup six years ago in brackets, are:

My first installment contained what they had to say. In short, the cadets did not know their mission or destination. They were ordered to get on buses and taken to the Bosporus Bridge to face the wrath of an angry crowd.  Two of their friends died.

A drawing made by one retired army colonel perhaps rounds off the cadets’ story. A blue bus stands in a wild crowd of people wielding clubs, stunned cadets inside, and a  masked sniper[p1]  at work from the woods. The drawing has an inset of an angry person, the look of President Erdogan — providing the missing link in the documentary. This link is also available from other reliable sources, including President Erdogan’s close allies like mafia leader Sedat Peker and a former AKP member of parliament, who has promised to lift the lid off the coup as an inside job, rendering the Erdogan narrative Turkey’s fatal lie.

The cadets’ component in the planned to fail coup was a sine qua non. It was the only way the military could be drawn in to justify the consequent purging, arrests, prosecution, jailing and persecutions of army officers perceived to have been planted by and sympathetic to Fethullah Gulen, the assigned mastermind living in U.S. in exile and the Hizmet (Service) Movement.

There are many reasons behind the coup being referred to as Erdogan’s fatal lie of the century. It is fatal because official records talk of 251 innocent lives being claimed in the operation. Why did these people have to die if not for the wishes of the government in power? There are people who have died in mysterious circumstances the government has failed to explain until today. What do the Saturday Mothers stand for? People perceived followers of Gulen and the Hizmet Movement are dying in jail, the latest case being that of a judge.

The Blue Bus documentary reveals a total of 355 military students being sentenced to life imprisonment. Although the Supreme Court has overturned some convictions, trials continue. The Decree Law saw 16,409 students being expelled. A total of 209 cadets are still in prison.

The closure of the military high school and the academy has, in a way, marred the history of military aviation in the West. The first aviation institution was opened in the Ottoman Empire in 1912 in the region where the Air Force Academy is located today under the name of Aircraft School. This was the foundation of the Turkish Air Force established in 1951 with the air force academy and its campus in Yesilyurt Bakirkoy. The Air Force Technical School campus was moved to to Gaziemir, Izmir on 17 September 1954.  The Air Force Academy was a military school training active officers and providing academic education and training to the undergraduate level. It was affiliated to the National Defense University with the decree law issued in 2016 after the coup.

According to the European Court of Human Rights and   U.N. Rights Bodies, “Turkish courts act as willing executioners of the executive and no longer care to give credence to human rights conventions, constitutional principles…. Turkey has been turned into a country outside of the law by its leaders. It is a failed country. Sacrificing the about 85 million people of Turkey to a few people in power or in the judiciary is a legal scandal, legal disgrace…”

That is where Turkey is as of today with 116,702 people convicted for membership in a terrorist organization and 115,714 being investigated. Interior Minister Suleyman Soylu, says 332,884 have been arrested over Gulen links between July 2016 and June 2022 and more than 101,000 put in pre-trial detention while 104,000 have been subjected to judicial supervision.

The Blue Bus documentary purpose, to explain the truth and expose the lie about cadets’ link with Erdogan’s the coup narrative, has been partially met. Their colleagues in jail are yet to gain their freedom back. Former Cadet Samet Yazgac, who was wounded and decided to live with the bullet that hit him in his back says: “Every time I feel this bullet, I remember what I went through and (will) never forget it. I have to defend myself and the rights of my beloved ones. My name tag: I have a few lofty aims. Protect my homeland, my nation, my loved ones, do good things for them. This reminds me of my goals and the years I spent in military high school and military academy.” These are the ‘terrorists’ Erdogan is fighting. What the cadets in jail need is justice not mercy.

Slowly, the truth about the coup is unfolding. Six years on, what was declared as the Democracy and National Unity Day is no longer worth the name and respect. The fact that only five thousand people, instead of the usual several million, turned out for this year’s e celebration, tells the story. July 15 is the day of the coup that was made to fail. It is the occasion of marking President Erdogan’s fatal lie of the Republic of Turkey centenary.