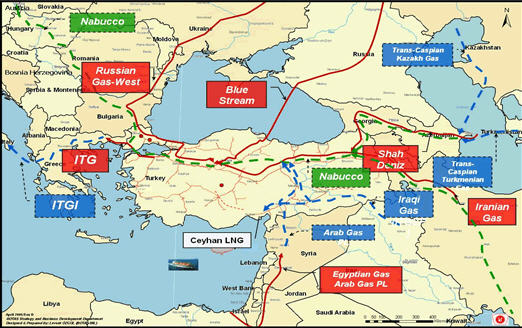 In geopolitical terms, Turkey naturally desires to expand its influence beyond the seas surrounding its territory. Thus, the country can be best defined as a ‘littoral’ middle power, which is caught in a perpetual balancing act between East and West. This has subsequently encouraged beliefs within the country that Ankara must be assertive in response to this situation.

This is a reality that existed before the formation of the Republic of Turkey and finds its origins in the late days of the Ottoman Empire. The modern history of the Black Sea region is based on an existential rivalry traditionally fought between Russia and Turkey. The Black Sea is strategic importance for several reasons. It is a historic hub of diverse cultures and political and economic interactions. It provides a successful anchoring of the CEE (Center Eastern Europe) countries in the Euro-Atlantic community. Unmistakably, geopolitical components must be considered concerning the area of crude petroleum and gas holds and the courses by which crude oil may be transported to the market by method for tanker, pipeline, and railroad, for instance.

As of late, more prominence has been given to the geopolitical significance of the more extensive Black Sea region, due to matters of energy security; Safe entry through the Aegean high oceans zones is fundamental to all Black Sea states whose merchant and maritime vessels need to access the Mediterranean Sea and its environs. Russia and Ukraine fight over undetermined borders and regional supremacy. Moscow has been trying to control the transportation of crude oil from the Caspian area to member states of the EU to guarantee that the Russian economy profits by minimal effort Central Asian energy, while Transnet and Gasport may convey Russian oil and natural gas at a higher cost to the lucrative European market. Gazprom has likewise begun to charge significantly more for the gas it conveys to states in the more extensive Black Sea area.

From the perspective of each litoral state, powerful regional actors understand uncertainty according to their own circumstances. Turkey is now trying to strengthen local cooperation in both political and security matters whilst simultaneously ensuring the reliability of the Black Sea Region. The country is also supporting EU and Organisation of the Black Sea Economic Cooperation (BSEC) security projects in the region. Overall, Turkey wishes to maintain the balance of power in the area. The country has various regional interests, particularly those that involve the energy transportation market. From the perspective of the West, Turkey is a reliable partner with regards to the South Caucasus and cooperates on numerous issues in the area.

From the perspective of Russia, Turkey is just another competitor that wishes to exploit the economic opportunities of the South Caucasus. Moscow subsequently sees Turkey as an economic hegemon and a regional rival. In Armenia, Turkey is viewed as pursuing privileged relationships with Georgia and Azerbaijan and unreliable with regards to issues of conflict. Its simultaneous desire to do business with Abkhazia whilst ‘supporting’ Georgian territorial integrity plays a key role in Armenian public debate surrounding Turkey. Despite this, Georgia visualises Turkey as a valuable strategic partner in relation to economic development and its Euro-Atlantic ambitions. Ankara’s steady relationship with Georgia is ideal for addressing issues surrounding wider issues of Black Sea security that affect the country.

For many years, Russia and Turkey relations have been cyclical. The relations between the two nations were sour during the rule of the Russian and Ottoman empires. In the 1920s, relations improved as the Bolshevik government helped during Turkish revolutionary. The end of the Cold War witnessed a rapid restoration of limited relations with Russia. The dissolution of the Soviet Union marked relations improve only for strained relations to emerge after the downing of the Russian Su-24 fighter jet by the Turkish F-16 in the year 2015. Today’s relationship is defined by both actors geopolitical parameters and national interests. Turkey concerns that new geopolitical objectives brings economic conduits.

The primary basis for these new links was economic in nature and this remains an area of significant policy interest today. For example, Turkey imports a large amount of Russian natural gas for its own domestic markets. At the same time, Russia continues to buy a high volume of Turkish agricultural foodstuffs and textiles. Russians constitute ten per cent of Turkey’s national tourism industry. The 1936 Montreux Convention affords Turkey the exclusive right to control maritime traffic in and out of the Bosporus Strait. This is by far one of Ankara’s greatest geopolitical tools, with this right strengthening its ability to engage in economic warfare. This competition can take the form of denying ships passage on the basis of their origins.

Whether such issues arise depends specifically on Ankara’s diplomatic relationship with the nation in question. This is often a determining factor in allowing maritime passage to economic markets and geopolitical theatres. However, these decisions are often made in relation to Turkey’s greater geostrategic commitments in the region. Since the Cold War, Moscow and Ankara have found themselves involved in a limited relationship that is dominated by concerns related to security and the economy. An overly ambitious Turkish foreign policy can result in isolation. Russia has the ability to operate with impunity and there is little that Ankara can do to deter military resurgence in Syria or in the Black Sea region save for American intervention. Diplomatic fallouts between Moscow and Ankara are sporadic, but do occur on a somewhat regular basis.

When Turkey downed a Russian fighter jet in 2015, relations were immediately strained. However, this tension simply appeared to place relations on a temporary hold. The recalling of ambassadors is seen as more of a formality in what is ultimately an inevitable process of geopolitical competition. Generally, in the aftermath of a political or economic rift between Moscow and Ankara, shared interests are quickly identified as a means of overcoming short-term tensions. This further reinforces both nations’ interdependence in spite of their foreign policies’ politically charged rhetoric. At the time, Erdogan went as far as to threaten the use of NATO’s ‘Article 4’, which would have called for member states to meet collectively in order to discuss what Turkey viewed as a key security breach.

This potential move was viewed as a necessary step should a larger Russian military response appear following the incident. One area of contention that has remained a key bilateral issue is Kurdish separatism. In retaliation for Turkey’s material and in some cases spiritual support for separatists in Russia’s North Caucasus region, Moscow has threatened to provide similar support to Kurdish paramilitary organisations. This includes the Syrian Democratic Forces (YPG in Syria), which has sought to undermine Turkish domestic security. Overall, the Turkey-Russia relationship is best summarised as one of fluctuating convenience.

As long as the current post-Cold War order remains, Turkey will remain a peripheral state restricted to the role of a middle power. In Ankara, Russian expansionist ambitions are viewed as inseperable from unresolved historical grievances. American commitments to Turkey continue to be motivated by largely geopolitical concerns, with the state determined to maintain the post-1991 balance of power. For now, shared authoritarian tendencies in Moscow and Ankara provide an incentive to view the West with suspicion, so long as Russia recognises Turkey as a regional partner rather than a geopolitical subservient.

The culmination of the Cold War between the US and the Soviet Union in the 1990s triggered the reshaping of international affairs at both a regional and global level. Yet, Turkey is a country that continues to benefit from the long-term effects of the Soviet Union’s dissolution. Turkey is a country with strong historical and cultural ties to both Asia and Europe. By the time, the geopolitical objective over the seas and peripheral region will be intensified. Although the field study suggest that Turkey has lack of foreign policy vision in Southern Caucasus, however, political elites of Turkey claim that Turkey is still a powerful state in the Caucasus due to her independent foreign policy.

A drift from the West will damage Turkey image of being role model state after dissolution of Soviet Union in Caucasus and Central Asia. For example, Georgia, Ukraine and Moldova are countries adapting and prescribing European Union programs, especially Georgia has taken a huge momentum are not looking up to Turkey as a precedent. Thus, Turkey is losing her ability to influence issues related to Black Sea security. The Russian fleet continues to grow in size on the Black Sea. As a result, beliefs in Moscow that the region ought to constitute a “Russian lake” are growing to the detriment of Turkey. Since the failed coup attempt, the Turkish military has lost much of its strength. Many well-educated navy officers, F-16 pilots and around half of the organisation’s generals were purged by the government. Due to this, it will take years for Turkey to re-establish its military power on the global stage. In the long run, Turkey will continue to tolerate Russian interests in Crimea, Georgia, Ukraine.

Since Turkey’s entry into NATO, its ‘Kemalist’ foreign policy has proven effective against Moscow and its desires to strengthen its influence in the Black & Caspian Sea regions. If the international balance of power shifts decisively eastward, Turkey will be forced to reassess its entire geopolitical outlook.

This will leave many to ponder whether Russia’s historical and cultural grievances will have any bearing on Ankara’s international position in the near future.