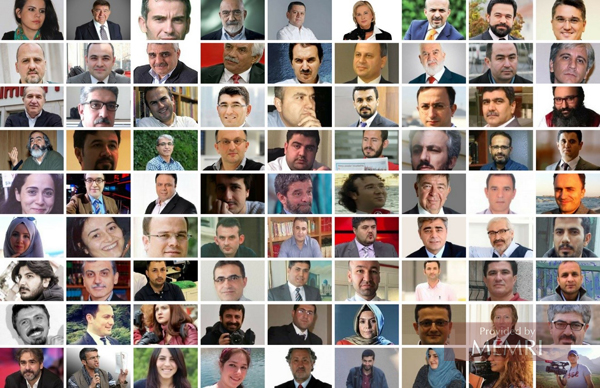 The news reveals a sudden development of Turkey-specific false justice response syndrome to the pandemic. In simple agricultural research experience, this is called a chance mutation. It is a development you cannot plan. It is sudden but real.

And, good or bad, it is something researchers have to accept and live with, irrespective of effects it may have on agricultural practices. But it has a bearing on subsequent research activity.

So, enter the SARS-Cov-2 in Turkey, the ruling Justice Party (AKP), out of the ordinary, seems to have swept its “justice” name component under the rug. That is a (political) chance mutation. It is reported to have drawn a draft law that would see prison sentences being slashed by two-thirds to half, benefitting a big number of prisoners.

This is good (at least on the face value).It also carries justice-at-last overtones, considering that many people have gone to jail through the unreal door in Turkey. It shows some levels of mercy. It shows positive response to the pandemic. Jails are not the right place to quarantine or isolate people in response to a health crisis. Health is indeed above political interests.

Cumhuriyet newspaper reveals that the beneficiaries would include drug dealers and sex offenders. At the same time, it says female convicts (in their tens of thousands) with children of up to six years and those over seventy years of age would enjoy a release on four-year probation periods.

The Cumhuriyet also reveals that the beneficiaries of this – call it coronavirus amnesty– would not include members of the media, politicians of opposition parties, defenders of human rights and sacked civil servants currently jailed for links with what Turkey classifies as terrorist organizations.

It is strange; but true and raises a litany of questions about the Turkish governance status. This only confirms what we say in Africa that: “It is the one you don’t suspect who does it.”

In the first place, if all this is because of real response to the coronavirus, what properties does the disease use to differentiate between drug dealers, sex offenders and the opposition, journalists and human rights activists and conceived terrorists?  Among key properties of any good law is the absence of discrimination. AKP’s draft, in essence, distances itself from this good practice. In good governance practices, all people are equal before the law. What is the cause of this sort and level of discrimination in Turkey?

Doesn’t the legislation draft read upside down when it proposes relief even to drug dealers and the like while pinning down the opposition, human rights activists and journalists? Does journalism practice, pushing for human rights and political   pluralism constitute a crime in Turkey –and a bigger one for that matter than dealing in drugs?

The draft likewise demonstrates how those in power can hide themselves behind socially accepted virtues like justice and compassion for others, to touch soft human spots or play around people’s sentiments to achieve their goals at whatever price.

To them, the end justifies the means. In this case, the ruling party in Turkey takes advantage of COVID-19 to gain more people’s popularity and support while at the same time maintaining the suppression of human rights and good governance practices.

This is the case of approaching the people on the basis of serf-serving political calculations. It is no wonder that as the news broke out about the law targeting the cutting down of jail terms for some sections of society, a petition was circulating on social media to press for the release of all political and conscience prisoners in the country.

A declaration made by Bar associations based in Turkey’s western provinces ably paints the real justice situation on the ground, although it narrows its demands on their sector in demanding justice for arrested and imprisoned lawyers.  It talks against (condemns?) an “arbitrary practice that lawyers experience in their professional life and that it is beginning to be permanent…”

Referring to what it calls “judiciary and democracy crisis Turkey has been experiencing in recent years”, it charges that the Council of Judges and Prosecutors (HSK) has been “politicized” and has been a tool of leaders and other political authorities to get their way rather than a means of justice.

“The courts are disbanded after their decisions, investigations are opened against judges who give verdicts before the ink of their signatures (dries) and the principle of judicial independence is violated every day with a new example.”

In the context of the formerly secularist nature of the country, the Bar association promise “to work tirelessly for all individuals, institutions and organizations to make them fulfill their constitutional responsibilities…

“Acting as the representatives of the people’s quest for justice,” the Bars Associations declare that they … “will continue to do all kinds of constructive work in all areas where they are assigned in accordance with the Code of Lawyers.”

As I was patching up this piece, two events happened, both related to the coronavirus rapid global spread with bearing on what is taking place on the ground in Turkey from the perspective of justice delivery. From Washington, a two-day World Freedom Forum originally planned to address “grave human rights violations in Turkey” was postponed sine die. From Ankara, Justice Minister Abdulhamit Gül announced the suspension of all judicial proceedings until April 30 following a law passed in parliament. This leaves the Council of Judges and Prosecutors to take other measures such as the postponement of trials.

All said, justice is a virtue just as charity is. But from the most recent development in the Turkish law draft discriminating against people in jail, it can also be terrible. Justice cannot be false. Justice and falsehood repel.

Virtues also have something in common. They stand in the middle– in medio stat virtus. They have no extremes and for each one of them, like in physical sciences, there is a vice.  Because of the inseparable truth about this relationship, something beyond human conception creeps in.

In the Nicene Creed, Christians “believe in one God, the Father Almighty, Creator of heaven and earth, of all things visible and invisible…”  In The Quran (12:76), Muslims have been told: “Above every owner of knowledge, there is (always) one more knowledgeable, Who is the All-Knowing” – meaning God.

So, when we come to issues – like justice– against which people of or no faith are bound to account for, some element of divinity creeps in. And this is where resort to the works of some people like St. Thomas Aquinas becomes inescapable.

Said he: “Opus autem divinae justicae semper praesupponit misericordiae, et in eo fundatur.” Sorry for that if you find it too much. But what it all means is that “the work of divine justice always presupposed the work of mercy, and is founded in it.”

The AKP draft law on jail relief in Turkey cannot pass the divine justice test. It is not based on mercy. It is discriminatory. It is false. Justice must be like the air, the sun and rain. The proposed relief should be for everybody—political saints and perceived sinners alike. Otherwise, it becomes a dustbin candidate.