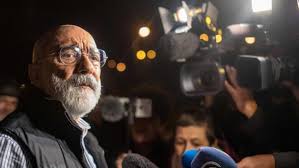 “Terrorism may sound like the gravest of offenses, but in Turkey, the government misuses the charge for political ends… Many inmates are placed in lengthy pretrial detention or sentenced without evidence”, she says.

More than 20% of the prisoners are accused of terrorism-related crimes, many of which are bogus and politicized.  “Among them are journalists like Ahmet Altan, politicians like Selahattin Demirtas and Figen Yuksekdağ, human rights defenders like Osman Kavala, and thousands of dismissed civil servants, teachers, and others punished for association with the Fethullah Gülen movement.”

Exempting such people from release serves more for the intentions of weakening the opposition and reducing political dialogue space than contributing to the control of the spread of the coronavirus. For, how does this, plus cancelling visits, serve the purpose of coronavirus response when prison guards remain in contact with people outside the jails?

The inmates are more susceptible to contract the virus under the conditions they are left (condemned) to live (die) in. According to a statement released by the Turkish Union of Medical Doctors, the official tally on coronavirus cases represents only a tip of the iceberg. It reveals the way in which more people are being treated showing symptoms than the authorities want the public to believe.

The government may not go very far with this understatement. This is cheating. I remember one African government which, in the wake of cholera outbreak deaths reaching threatening levels, having ordered a state radio and TV station to halve the figures in order to reduce the scale of public fears.

Fifty died. The figure announced was 25 deaths. Forty died and only twenty deaths were announced. When 15 people died, an unsuspecting newsroom reporter on duty wrote a story of seven-and-half. TV anchor and radio presenter flashed it in the air.

There was a public outrage. How can seven and half people die? How? Editors were sacked. But people’s trust in their government waned as well. How can a government worth bring called people’s cheat the very people and about man’s most precious property, life? And for that matter in circumstances involving people burying their loved ones?

The Turkish and other world media outlets have a big role to play in the fight against the spread of the coronavirus. They have to say the truth and educate the masses on the pandemic. They must not fall prey to those who want to practice politics without principles or who want to make money on the pandemic without character.

There are already reports that the coronavirus pandemic has fueled hate and xenophobic speech in the predominantly pro-government Turkish media, which accuses the usually targeted groups and countries including Jews, the Gulen movement and the West of being the source of COVID-19 and spreading the virus among Turkish society.

It is wild to portray the pandemic as a tool of biological warfare, a selective or smart virus developed by Zionists, Westerners/dominant powers, people affiliated with the Gülen movement or the Rockefeller family in order to “subjugate intransigent countries to their will,” “redesign the world,” “launch chaos in the country,” “create ‘Lego’ religions” or “occupy minds”.

COVID-19 has become an opportunity to dehumanize minorities and vulnerable social groups for some loyalists of President Recep Tayyip Erdoğan.  According to Nedim Şener, a government propagandist:“The coronavirus is a disease that can someday be cured. But FETÖ is incurable. It cannot be gotten rid of unless someone dies. FETÖ is an illness and immorality that is worse than the coronavirus. There is no cure for it at all. This society hosts hundreds of thousands of those who have contracted the FETÖ virus.”

I am a foreigner to Turkey, but not to Turkish affairs. The world is very small today. I tend to agree with those who argue that FETÖ is a derogatory term coined by the Turkish government to refer to the faith-based Gülen movement, a civic group that has been active in education, interfaith and intercultural dialogue and charity work in many countries.

Gulen, a US-based Turkish Muslim scholar, a critic of Erdoğan on corruption and the Turkish government’s aiding and abetting of armed jihadist groups in Syria and other countries. President Erdoğan turned against the movement after major corruption investigations in December 2013 that implicated Erdoğan, his family members and his business and political associates.

On a serious and critical note, if one were to take Nedim Şener input, combine it with what has been happening on the ground in Turkey and why Gulen is a vocal opponent of the Erdogan ruling module, could one be wrong in coming to a conclusion that if there is “FETO” virus in Turkey there is also an “ETO” virus. And that if one were to choose a lesser between the two, the country would be better off on “FETO” rather than “ETO”?

Back to the Turkish Government plans to release prisoners but to exempt terror suspects from this, 33 bar associations have argued that as a founding member of the Council of Europe, Turkey is obliged to “safeguard the health of all prisoners” without discrimination in the wake of the pandemic. Europe’s Council Committee for Prevention of Torture and Inhuman or Degrading Treatment of Punishment says Turkey had to strike a balance between the duty to protect public health and security with upholding prisoner rights. It urged all members to make all efforts to “resort to alternatives to deprivation of liberty, and pre-trial detention…”

Turkey indeed has a serious problem of overcrowding in prisons. These punitive houses are severely overcrowded, currently operating at almost 136% of capacity – with some of them holding 45 inmates in cells that are designed for just seven. This is deplorable, considering that some of the inmates, including pregnant women, breastfeeding mothers and their children are not supposed to be there.

It is good government gesture to hear of prisoner release plans. But for whom are these plans if they discriminate against beneficiaries on the grounds of holding a different opinion from that of the ruler? And in the coronavirus circumstances, doesn’t this move become a sum total of a death sentence, which is not in the laws of the land?

If he wants, Erdogan can pick a leaf from Ethiopia, which released 4,000 prisoners immediately.  He can learn from his neighbour, Iran (85,000). The Quran (40:19) has something for him as well. “He (God) knows the stealthy looks and that which the breasts conceal.”