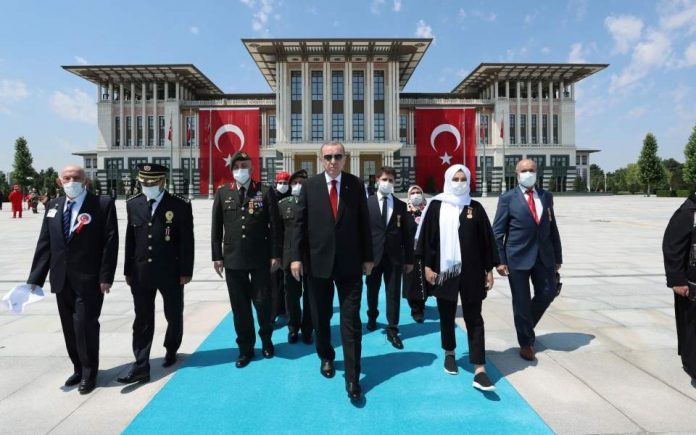 More than six years ago, on 15 July 2016 to be exact, the whole world was told and impressed upon by the Erdogan regime and its ‘pseudonym’ ruling Justice and Development (AKP) party to believe that a failed military coup had taken place in Turkey and that the Gulen Movement, immediately thereafter assigned the name “Fethullah Terrorist Organization (FETO)”, was the brain behind.

Before the echo of this info, or what from the athletics games perspective one could express as “on the heels”, Muslim cleric Fethullah Gulen, from his self-exile residence in the U.S.A. Pennsylvania State, condemned the putsch and offered to return to Turkey to stand trial, subject to results of an independent inquiry. Nothing of that kind has taken place. Could it be the case of when in doubt leave out for Turkey?

To the right-thinking, searching and inquisitive mind, the question was and has remained to be: “What should the world take from the Erdogan-AKP narrative and Gulen’s response? Definitely one of them is either telling a lie or not the whole story.”  But who is it between them? From the holy scriptures’ point of view, who, between Erdogan and Gulen, transgressed or did not care about the “Thou-shalt-not-lie” God’s seventh of the Ten Commandments handed over to Prophet Moses on the tablet?

In everyday life, all cultures have their own views about lies. Some say: “Lies have short legs” – meaning they can never go far enough to completely deliver the perpetrator’s goal. In the long run, something wrong is bound to happen.  There is a generic observation holding that for one to be a successful liar, one must have a perfect, very sharp and cute memory. Short of that, one would end up giving divergent and inconsistent versions of the same lie to the same audience at different times, and, in the worst scenario, at the same place. The result of which is evident.

In Africa, indigenous knowledge believes: “Orwo  obeiya, nirwo bwangua kukya” – translated, “when you tell a lie, that is when it hastens to dawn”.  Contextually, in that circumstance, rays of the Sun will shine on and expose your lie. The bottom line is that lies and truth have no mix or combination to share like hydrogen and oxygen from which two molecules of the former plus one of the latter produces water.

How do the above mentioned across-the-board aspects tally with the Erdogan regime and his ruling AKP July 15, 2016 narrative(s) or version(s)? That is: “Down the six years’-plus lane since the ‘failed coup’, who stands a liar between Erdogan and Gulen?

Symbolically, for the purpose of this analysis, there is no need of going back to the Torah’s Genesis and Exodus books.  A critique of today’s Jerusalem status through the West Bank-Gaza strip mirror, coupled with a learning trip to Egypt, Jordan and Lebanon could be more rewarding. No wonder rivers of tears shed on the walls of the disputed Jerusalem City over the millennia, have yet to dry.

Likewise, to understand the root of what has turned out to be the planned-to-fail coup in Turkey, one need not dig into rubbles of the December 17-25, 2013 corruption scandal investigation results that pinned down the then Prime Minister Erdogan, — now president –his family and inner circle.

The speed at which people were rounded up could not have been so fast and accurate without a pre-compiled list. The sacking, arrest, prosecution and jailing of prosecutors, judges and lawyers was a sine qua non for creating an environment conducive for accusing people on trumped up charges.

The judiciary had to be transformed into an arm of the executive. With the majority in parliament, it is easy for a government and party in power to push any draft bill through into law for achieving the desired end.   So, in a way, one can understand why Erdogan and AKP had to concoct the coup story to create a common enemy for registering people’s support and sympathy while creating a stage for committing all sorts of crime against humanity, even those beating reason, the likes of sacrificing 251innocent lives, to retain the throne.

‘Rivers’ of Turkey failed coup lies continue to unfold. And could they be ad infinitum?  Could they even outlive the life of the perpetrator?  Until then we knew that military cadets were ambushed only to face the wrath of the masses during an incident that also involved fatal shootings.

In their “The Blue Bus” documentary, the cadetsrevealed that they never knew the destination or the mission. Mafia boss Sedat Peker in his Videos released at about the same time revealed the source of arms and how they were distributed through AKP involvement. Where does Gulen’s claimed key role come in?

Still at this very site, there were more questions about circumstances leading to a big civilian turn out to quell an attempted military coup.  The latest revelation is that Erdogan’s address to the Turkish people during the night of the coup with a CNN Turk TV anchor was not spontaneous. It was something planned in other words.

According to a Video released by a German-based investigative journalist specializing on Erdogan’s government and ruling party corruption, CNN Anchor’s story that Erdogan called her in the heat of the moment was a hoax and that the call was planned a day before the coup attempt. The Video reveals that the CNN Anchor had a meeting with the press advisor of the Turkish intelligence MiT a day before the coup. What made it impossible to contact the horde of available local media outlets?

Whatever way one looks at it, the Erdogan and, therefore, AKP version of the coup is rendered highly questionable. The MiT, therefore, new about it. Why then had President Erdogan have to tell the world that he learned about it first from his son in law? What did Erdogan and the MiT have to share with CNN rather than the local media? Could this be another unfolding part of the lie in the unfolding pipeline?

You are at liberty to choose if it was a consequence of or a subsequence to the coup when the Parliament formed an inquiry committee, which suddenly stopped working on the assignment, this time definitely subsequent to Erdogan’s disapproval of its findings. The committee’s deputy chair revealed last year (five years later) that this was consequent to a warning that the report could help members of the Gulen movement later to raise demands for compensation. What else could unfold about who the liar is? Or even better put, what could prevent the world to look forward for further revelations about the coup lies?

As time goes by, more and more truths unfold about the failed coup lies and they don’t seem to come to an end. Could they be for ever and ever more? Without end? Ad infinitum? Maybe even some could still mushroom from Erdogan’s grave. Why not?