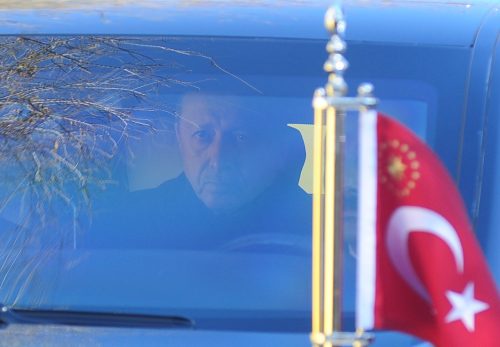 Gender apart, in life, there is nothing more appealing, pleasant, satisfying and rewarding, like making or raising a family of one’s dream. But this is not something one can expect to pick under a gooseberry tree. It involves a painstaking, etiquette-packed, very keen process and providence depending on one’s faith and religious path.

This is where the African indigenous knowledge strongly cautions: “Engambagambi temanya mbali elajumila nyinazara” –  translating in “the too-much talkative suitor does not know the stage at which he insults the mother-in-law”; the result of which is quite clear. A horizontal or, in the worst scenario, a vertical end to the engagement process, wiping out any wedding prospects and, eventually, no family to raise of course.

For all practical purposes, as the country heads to the presidential and parliamentary elections, one can argue that, now than ever before, the African caution hoovers around political skies of the Republic of Turkey, the homeland of the Father of Turkey, Mustafa Kemal Ataturk, Bediuzzaman Said Nursi, whose philosophy aimed at protecting society against ignorance, disunity and poverty and Joefendi Fethullah Gulen, the pro-dialogue, anti-force Islamic scholar and leader of the Hizmet (service) movement which Erdogan defines as terrorist.

The question is: “Why that argument now?  What is special about it? What are its premises?” That is the question every responsibility-assigned Turkish leader worth the salt, from the grassroots’ community to district, provincial and national levels, should be seriously asking themselves and providing answers, for which they must be ready to be held accountable and face consequences.  From whatever elevation, leadership, in essence, is meant for community, not self-service.

A quick scan of post-Ottoman Turkey reveals a Republic on the verge of turning centenarian in many aspects.  The Treaty of Lausanne, Switzerland, which kick-started the process, was signed 24 July 1923.  On October12, 1923, Ankara became   officially the capital of the new Turkish state. Seventeen days later, 29 October 2023, the Assembly claimed Turkey a Republic with Mustafa Kemal as its first president.

The Republic of Turkey will be 100 years old next year.  But, more than what will be on the year-long celebrations timetable, the country will go to polls for presidential and parliamentary elections slated for June 18. So, with what sort of government in place will Turkey celebrate its 100th Republic birthday, four months after the polls? Who will be occupying the palace in Ankara?

From the incumbent President Recep Tayyip Erdogan’s declaration of his candidacy on 9 June, 2022, one can conveniently say the countdown to the polls day had begun. Speaking during an event in western Izmir, he said: “… here I say it, the candidate of the People’s Alliance (comprising the ruling Justice and Development Party (AKP) and the Nationalist Movement Party (MHP) is Tayyip Erdogan.”

On an inquisitive light note, did he forget “Recep” or does that not matter in the 2023 polls? After all, even not many people also know Fethullah Gulen after the name of Muhammed. But on a pertinent and more serious note, how does Erdogan fare for the post? Is he the fair  Turkish choice? As the incumbent ‘suitor’, doesn’t he have a case or cases to answer against the African indigenous caution of “insulting the mother-in-law?”

First and foremost, one would naturally like to touch base with the days when the Assembly declared Mustafa Kemal, the Father of Turkey, Ataturk, about a century ago. One thing nationalists of the day did under Mustafa Kemal was to end their isolation and win international recognition.  What is the situation today under Erdogan, the ruling AKP and ally MHP?

Subsequent to Arab Spring that began in 2010 representing a turning point in turkey foreign policy, Turkey embraced uprisings and went on to engage militarily. Mavi Vatan (Blue Homeland) set the country focus on Mediterranean waters; cross border campaigns into Syria, Libya and north Iraq on top of setting up new military bases in Qatar and Somalia.

If Turkey were compared to a human being, the country could be said to have been suffering from “serious loneliness” as once correctly put by Erdogan’s policy adviser Ibrahim Kalin. Allies have been scared away by neo-Ottoman discourses, gun diplomacy and anti-West statements coupled with domestically fueled foreign policy moves. Turkey has practically lost its chance for EU membership while that of NATO remains questionable with Russian S-400 missiles in the country’s warehouses.

The fact that Turkey has been busy trying to reset or mend relations with its Middle East and Eastern Mediterranean neighbours, and — Israel, Saudi Arabia, Egypt and the United Arab Emirates — is proof of the AKP-MHP government of Erdogan having Taken Turkey back 100 years on the question of isolation and win international recognition. Presidential candidate Erdogan has ‘insulted the mother-in-law’, efforts to reach the Balkans, Caucasus and Central Asia notwithstanding. Turkey has lost credibility in the international arena.

Another area of ‘insulting the mother-in-law’ is the elimination of democratic rule and disregard for human rights. It is here that the Executive Director of the Human Rights Watch Kenneth Roth, has a precise wrap-up in saying: “The government of President Recep Tayyip Erdogan is dismantling human rights protections and democratic norms on a scale unprecedented in the…  years he has been in office… President Erdogan is targeting any institution or part of society that stands in the way of his wide-ranging effort to reshape Turkey’s society…”

Kenneth Roth gave examples of “… developments against parliamentary opposition, the Kurds and women … (which are) all about ensuring the president’s hold on (to) power in violation of human rights and democratic safeguards.” He cited the withdrawal of Turkey from the Council of Europe’s Istanbul Convention on Preventing and Combating Violence against Women and Domestic Violence. This was a groundbreaking far-reaching treaty strongly supported by the women’s rights movement in Turkey.

Lastly, normally everybody has the feeling of what terrorism involves. The problem arises when it comes to perpetrator identification and subsequent measures. The reason is because in terrorism practice, there are elements of crime and arms and it depends on who the loser or beneficiary is and status.  This is why under the Erdogan rule, people are sent to jail even for helping orphans perceived to have links with the Hizmet Movement while the Turkey Intelligence, MiT, sends arms to anti-Assad rule forces in Syria. The MiT is ready to cross continent borders, enter a foreign country, abduct anybody perceived dissident and President Erdogan is ready to go on TV and reveal the big news. State terrorism is OK for Turkey. Can he promote community solidarity on hateful propaganda?  What an ‘insult to the mother-in-law.”

As Turkey heads towards the polls, the Erdogan government plays the role of the complainant, the prosecutor, the judge and the prison warder. The country has a rubber stamp parliament with the executive having signed into law more decrees than bills debated through the House.  What an ‘insult to the mother-in-law.”

Against the background of 145 foundations, 1,419 associations, 15 foundations owned by universities, 151 privately owned media outlets closed, and an assortment of government non-governmental organizations (GONGOs) established, what sort of society does Erdogan want to develop Turkey into? Isn’t his rule indeed one big case of ‘the suitor insulting the mother-in-law’?  He respects no boundary, be it faith, religion, social, economic, human rights, good governance, name it.