Turkey polls “tragedy” in the making? 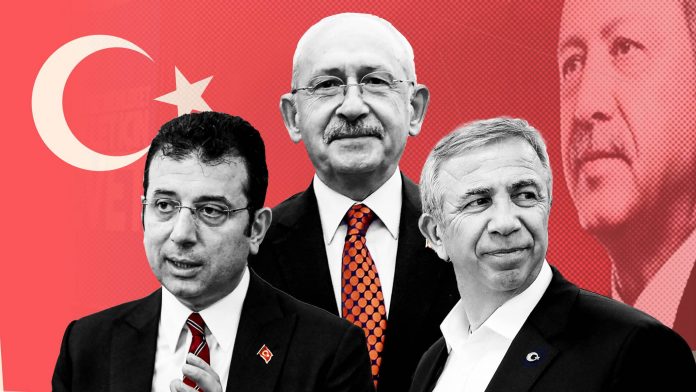 The emergence of a united opposition political parties option under an umbrella tag of the Table of Six on the Turkish political stage was definitely a development in the right direction towards ending almost two decades of Erdogan’s now one-man rule. Thinking about this possibility some years back one would have easily risked being classified as a day dreamer.

Until then, it was so good and the time could not have been riper as the country stepped on the path to presidential and parliamentary elections. While the Table of Six targeted, among others, ending the presidential system, a one-time survey conducted by Yoneylem Turkish pollster showed 65% of voters supporting the idea while 63% said the country was being ruled badly. And 58% said under no circumstances could they vote for Erdogan. What a positive glimmer of hope for a country under the scourge of a cruel dictatorship.

But, as fate would have it, about five months to the polling day – that is if Erdogan and ally do not decide on an earlier date – isn’t the seemingly ‘united’ opposition slowly showing signs of swimming into Erdogan’s jaws, or even worse, risking operating under his thumb? Worst still, what are the chances of the Table of Six delivering as one? Slim? Why?

Very conducive to Erdogan’s divide-and-rule tactic, the sum total of political parties’ opposition in Turkey — that is, the Table of Six and the second largest opposition party in parliament, pro-Kurdish Peoples’ Democratic Party (HDP) — in essence stands divided. How?  While the Table of Sixdistances itself from HDP, HDP complains about being ostracized by the opposition bloc and has, in fact, said it will field its own presidential candidate. “The HDP will decide on its own presidential candidate and will take part in the election with that candidate”, co-Chairperson Pelvin Buldan said at a party event in the eastern province of Kars.

Facing closure case on terrorism charge, HDP argues that if the Table of Six want the party support they need to sit at the table with them and acknowledge their demands. Even former HDP co-chairperson Selahattin Demirtas, currently serving a jail sentence on framed up charges, is reported to be in favour of this. Through his lawyers he is reported to have said: “The HDP is a political party, not a foundation that will support a candidate who cares nothing about it.”

The same Demirtas warned in an article that the opposition parties’ failure to determine a joint presidential candidate would result in a “tragedy”. HDP parliamentary group deputy chairman Saruhan Oruc was quoted as saying that his party is ready to cooperate with the opposition bloc to determine a joint candidate.  This is not coherent. A joint candidate whom they are ready to challenge in the polls, weakening the opposition chances, and expecting a win against Erdogan? Miracles don’t work out that way.

Al-Monitor has quoted a HDP official as saying; “For the past year and half, we have been begging the opposition (Table of Six) to sit down with us, to forge a common strategy. Instead, they ignored us, scorned us, and believed we would do their bidding and mobilize our base in their favour. The truth is that the opposition is every bit as fascist as Erdogan and has zero inclination to do anything for the Kurds. Quite the opposite. Thus we say. ‘let the fascists battle it out among themselves and we will go our own way.’ If they think we are bluffing and will help them win as we did in Istanbul, they are in for a big shock.”

Who constitute the Table of Six? They are: Main opposition Republican Peoples Party (CHP), the nationalist IYI (Good) Party; (conservative) Islamic Felicity Part (SP) which was Erdogan’s first political entry tangent; the Democrat Party (DP); the Democrat and Progress Party (DEVA) which has been out in the field for decades and the Future Party (GP).

What can be read beyond the Table of Six screen? An Istanbul court has already passed a jail sentence and imposed a political ban on Istanbul Mayor Ekrem Imamoğlu, prompting strong condemnations as a blow to Turkish democracy. Imamoğlu is seen as a strong opponent of Erdogan in the coming polls. His lawyer told the court: “This is not a case in which Imamoğlu is tried but the trust of the judiciary is tested.”

In between, CHP faces a dilemma of who to put forward between Imamoğlu, its leader Kemal Kilicdaroglu, and Ankara Mayor Mansur Yavas. Results of poll opinion surveys conducted so far slot Imamoğlu and Yavas individually ahead of Erdogan but remain inconclusive on Kilicdaroglu.

Sinking the dip stick deeper into the engine sump of the Table of Six reveals that some opposition leaders were   Erdogan’s colleagues. The Future Party’s   Davutoglu was foreign minister and prime minister.  Ali Baabacan of Democracy and Progress Party held several senior ministerial roles. Both were founder members of the ruling AKP with Erdogan. So, they know him and he knows them. They know one another.

It remains to be seen how far these former AKP members and functionaries have really distanced themselves from the Erdogan one-man rule in favour of justice delivery, good governance, rule of law, respect for human rights and international conventions to which Turkey is signatory and putting in place a government free of corruption, drug trafficking, torture, social genocide and ties with organized crime and terror groups.

Likewise, the whole world must be watching, eyes wide open. If Erdogan doesn’t come back, would NATO and allies sigh with some relief? Would the European Union Council breathe a little over the east Mediterranean crisis? Russian Federation Vladimir Putin is equally watching. Where does he find another ‘faithful’ buffer between him and the West? Would there be other sophisticated weapons’ sales – somebody with whom he can be enemies and friends in the same scenario?

I don’t know how Mustafa Kemal Ataturk or Said Nursi would feel about the forthcoming presidential and parliamentary polls in Turkey – that is, if they were around. But definitely, Fethullah Gulen, in his self-exile home in the US, must be asking himself lots of questions. The likes of, could this be the beginning of an end to all injustices done to the people Erdogan deems are his followers?

One should hope if the Table of Six and HDP leaders could take a minute and think of what the sons and daughters of Turkey at home or living in exile are missing because of the Erdogan regime. If they don’t put their differences aside and face the enemy first, “tragedy” is what they should expect to result from the forthcoming presidential and parliamentary polls.

United they should stand rather than fall. They have nothing to lose except Erdogan’s tortures and chains. The choice is theirs, just as would be the praise or blame. From Africa, the message is “Umoja ni Nguvu — meaning, Unity is Strength. Opposition parties in a southern Africa country of Malawi fielded one candidate in a re-run election and won. The opposition in Turkey can repeat the Malawi story.