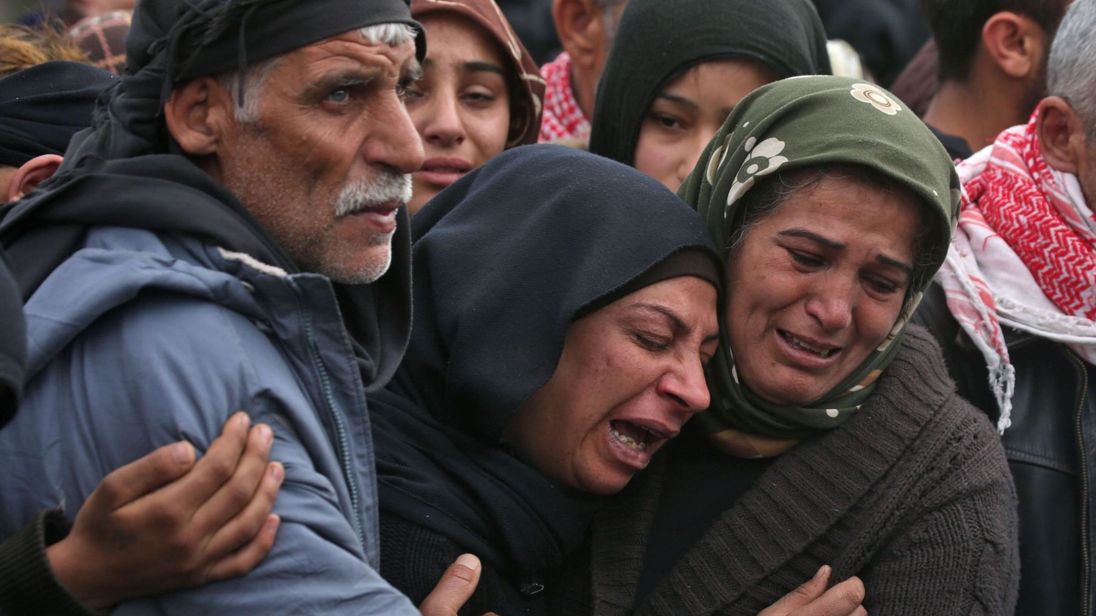 Qamishle, Syria — Turkey’s President Erdogan was furious when the US announced the creation of a Border Security Force made up of 40,000 Syrian Kurdish fighters (YPG) to patrol the Turkish-Syrian border and guard against the Islamic State (ISIS). In a fit of pique, he vowed to attack Afrin, an oasis of tranquility in northwestern Syria, and then pivot east to create a security belt along Turkey’s border with Syria as far as Iraq. Erdogan was true to his word.

On 20 January 2018, Turkish war planes started their bombardment of Afrin, launching an ethnic cleansing campaign aimed at expelling Kurds from their homes and replacing them with Arab refugees in Turkey. Turkish armed forces were joined by the Free Syrian Army (FSA), a jihadist militia with Al-Qaeda and Al-Nusra affiliations. Attacks intensified over 58 days killing hundreds of civilians – Kurds, Christians and Yezidis – and displacing more than 300,000 people.

I recently interviewed survivors of the Afrin operation who described a systematic campaign of state-sponsored terror, aiming at ethnic cleansing and changing Afrin’s demography. Afrin was an oasis of tranquility in Syria’s bloody civil war, until Turkey’s unprovoked attack.

Turkish forces and their jihadi proxies committed genocide and crimes against humanity, as defined by the Geneva Convention (12 August 1949). It conducted indiscriminate bombing of civilian settlements, massacring members of an ethnic, denomination and belief group. It violated the Geneva Convention of 12 January 1951, which makes collective punishment a crime (Article 1) and criminalizes violence against national, denominational and religious communities (Article 2).

According to the Democratic Syrian Council (DSC), 157 civilians were killed by Turkish forces and their jihadi affiliates, including 56 women and 46 children. Among the 448 civilians injured are 104 women and 155 children. YPG tried to defend the people but were helpless against overwhelming air power, losing 525 fighters. More than 300,000 civilians fled Afrin for Til Rifat and Shehba regions.

Persons I interviewed recounted the gruesome carnage of elderly and disabled, killed while struggling to depart the city. A mother wept when remembering her daughter’s death. A surgeon described routine amputations of limbs mutilated by Turkish munitions. The DSC confirms that the Turkish state has:
Targeted groups in violation of Article 7 of the 1998 Rome Statute, which established the International Criminal Court.

The attackers also burned books, documents, historical artifacts, and destroyed sacred places, such as the historic temple of Eyn Dara. They destroyed the Yazidi Union Center, as well as water treatment and storage facilities. Journalists and medical workers were targeted. All these actions violate international human rights and humanitarian law.

Following are examples of crimes committed by Turkey and forces under its command against civilians in Afrin over a 58-day period, beginning on 20 January 2018:

Bombing a chicken farm in the village of Enabke (January 21). Eight family members lost their lives.

Bombing the village of Dêr Belut (January 23). Four civilians died and 5 were injured.

Bombing Koble village in the Shrawa district (January 28). Eight civilians from the same family were killed and 7 were injured.

Bombing the borough of Eşrefiyê in Afrin (January 31). One child died and 21 civilians, including women and children, were injured.

Attacks on he borough of Basutté (February 9) killed one child and injured 9 civilians.

Bombing a convoy of civilians, killing one and injuring 12 (February 9).

Bombing Kaxire village of Mabata (March 2). One civilian died and 5 were injured.

Bombing the village of Berbenê in Raco hitting a convoy of civilians (March 5). Three civilians lost their lives and 9 civilians were injured.

Eight civilians were wounded and 3 died from a mine explosion near Ferferiyê village (March 6).

A mine explosition in Gimrok, Babat province killed 2 civilians (March 13).

Near the village of Bediñê in the town of Raco, 4 civilians were injured while a civilian lost his life due to a mine explosion (March 13).

A mine explosion killed 4 civilians in the village of Tirindê (March 18).

The Afrin campaign served no strategic purpose. Erdogan prosecuted Afrin because he believes that the YPG is a branch of the PKK, Kurdish militias who have fought the Turkish state for decades, demanding greater political and cultural rights. There were few if any YPG in Afrin before Turkey’s attack.

Survivors testify that the campaign intended to “Turkify” Afrin and change the region’s demography. In addition to forcibly displacing the people of Afrin from their homes, students were forced to carry a Turkish flag and the JFA forced children to appear in videos thanking Erdogan. Kefer Cenê District was completely Arabized through the settlement of gang members and 4,000 families. At least 300 families of JFA members were relocated to the village of Kefer Sefrê. Others JFA members and their families were settled in the Ikbis and Moska villages, in the district of Shiyê and Cindirêsê. Plundering of private homes was widespread. Street names were translated into Turkish and Arabic. Civilians who remained in Afrin were forced into madrasas offering radical religious education and women were required to wear a veil. Yazidi people were forcibly Islamicized and required to attend religious services. Those who resisted were beheaded. Yezidi women and children were subjected to harassment and rape.

During our meeting, people displaced by the conflict broke into tears and pleaded to go home. They demanded justice. In fact, victims have a right to justice, according to the Geneva Conventions and principles of the Rome Statute. They also have the right to “Truth,” a full accounting of Turkey’s crimes.

The Rome Statute is clear on the matter of state responsibility. It affirms that, “It is the duty of every State to exercise its criminal jurisdiction over those responsible for international crimes.” Consistent with the principle of state responsibility, the Government of Syria should investigate and prosecute Turkish perpetrators and their jihadi proxies.

If Damascus is unwilling or unable, the international community could set-up a commission of inquiry to gather facts and recommend a criminal investigation. The commission’s work would address events over a specific period of time and geographic area.

The United Nations Human Rights Council (UNHRC) is the best body to establish a commission of inquiry. If not the UNHRC, the Council of Europe (CoE) could take the lead. The CoE initiative could support cases brought to the European Court of Human Rights with backing by a resolution of the European Parliament.

The UN Human Rights Commission codified the right to truth in a 2005 resolution, which obligates the state authority to investigate human rights violations, provide information on official investigations, inform individuals of the fate of missing or forcibly displaced relatives, provide “mortal remains” of the victims, and disclose the identity of violators. The memory and stories of victims must be recorded through accounts by witnesses, family, and other survivors.. Data on war crimes would lay the groundwork for criminal prosecution either in a domestic court or an international tribunal.

Official, semi-official and civic Truth Commissions (TCs) could be established to document events. A TC would seek to establish the facts and recognize the experience of victims. The Self-Administration of North and East Syria or a well-respected NGO in the region, such as the Rojava Center for Strategic Studies, could take the lead.

Afrin’s crimes can also be remembered through special projects that enshrine memory, creating public dialogue and opening civic spaces. These could include photo exhibitions, as well as theater, art, video, traveling exhibitions, and Web-based platforms. A Genocide Museum could assemble various materials telling the story of Affrin.

The perpetrators, including the Turkish state and its terror proxies, should be identified and held accountable, including those with command responsibility. Deterring Turkey’s future aggression is also an urgent priority, given Erdogan’s threat to expand operations. James Jeffrey, the US Special Envoy for Syria, recently testified that it is “unacceptable” for Turkey to attack US-allied Kurds in Syria. US Special Forces are establishing 5 posts along the Turkey-Syria border as a trip wire against aggression.

US engagement is critical. If the US does not defend the Kurds, and ultimately create conditions for their return to homes in Afrin, Northern Syria will become a bloodbath for which the US will share responsibility.