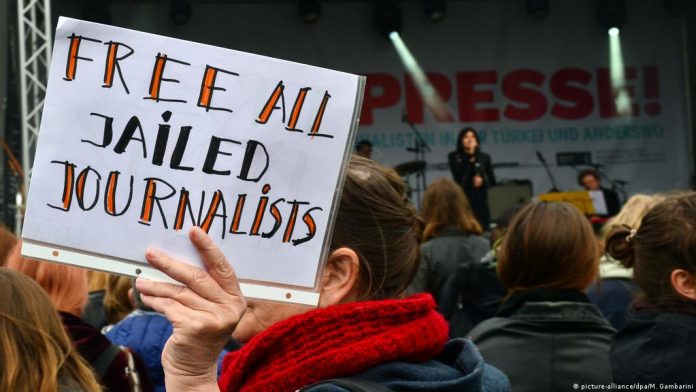 Along kinship lines and as figuratively first-degree media stakeholder, I had little choice to sending congratulatory messages to comrades and perusing pages –or visiting the web in the digital lingua franca style — of our designated global profession caretaker UNESCO on the 2022 World Press Freedom Day. But the Organization’s two-tier observation choice mode for the occasion turned out to be somehow out of the ordinary.

Besides a very timely and strategically packaged “Journalism Under Digital Siege” theme, UNESCO Director-General Audrey Azoulay, on the ground, still sent to the world an open invitation to think of space-and-time transcending basic relations between the media, justice, and the rule of law. The invitation also called for taking this opportunity to examine the new challenges regarding the freedom of press online and to highlight the crucial role played by the profession in defending and preserving the democratic rule of law.

The first invitation component took me back about five decades (1973 to be exact) when, as an executive African journalist, I found myself in a maximum-security prison without going through the court.  Thanks to global ‘noises’ from the foreign press, British Broadcasting Corporation (BBC) in particular, I won back my freedom after three weeks, again without going through the court. Detention was something media workers of the day expected under government guise of “state security”. To us, it was like an imminent occupational hazard – just like a tire burst is to a driver.

At that time, there was nothing like the World Press Freedom Day. On a historical note, the day we celebrate today was proclaimed by the United Nations General Assembly (UNGA) two decades after my incarceration (1993). This followed a recommendation adopted at the 25th Session of UNESCO’s General Conference, which was itself in response to a call by African journalists who, in 1991, produced a landmark Windhoek Declaration on media pluralism and independence.

More to it, the fact that the day traces its roots in Africa is not by chance mutation. Journalism, under one-party African governments, spiced by an assortment of post-coup and counter-coup military regimes, was a real endangered occupation specie. During detention, for example, I remember having been asked an ‘offside’ and irrelevant question by an interrogation committee member to prove that I was a Tanzanian (not Ugandan). Both neighbor governments had friction. Fine. But what did that have to do with my nationality status? Was I in jail on an immigration case? Definitely not.  Journalism was and is still the victim in many like situations — domestic or otherwise.

DG Audrey Azoulay was right when she said the day serves as an occasion to inform citizens of violations of press freedom — a “reminder that in dozens of countries around the world, publications are censored, fined, suspended and closed down while journalists, editors and publishers are harassed, attacked, detained and even murdered. It is an occasion to assess press freedom worldwide.”

This is not the age of Gutenberg. It is no longer the age of the typewriter, telex and tele printer machines, the letter press, linotype and DNA/ASA film speed photography technology. But the interests of the profession and practitioners remain the same, thus demanding a new commensurate configuration –the one that protects journalism and journalists.

This is painted better on the stage of a global conference in Punta del Este, Uruguay, which attracted about one thousand participants from more than 86 countries. This involved more than 60 online and offline sessions with registrations running in the region of three to four thousand over three days.

Also worth noting is that this is also the 10th year of the UN Plan of Action on the Safety of Journalists, bringing into the picture a joint statement on the day issued by the presidents of UN General Assembly, Abdulla Shahad; UNESCO General Conference, Santiago Irazabal Mourao; and Human Rights Council, Federico Villegas, “to ensure   journalists and media workers can work independently and safely, without hindrances, threats or violent reprisals.”

From Uruguay, the presidents lament: “… still too many challenges prevail including high level of impunity for crimes against journalists, a rise in the number of journalists detained and increased legal harassment against them, online violence, the use of surveillance tools to hinder the journalist’s work, increased attacks on women journalists, and the rise of killings in non-conflict environments.”

Downloaded on world governments, the three presidents’ joint statement from Uruguay paints embarrassing pictures of the status of many of world country governments. In some of them, one would wonder if the World Press Freedom Day does not actually translate into a world press freedom mourning occasion. The Turkey story sticks out its neck in this aspect and in respect of which Muslim cleric and scholar, Fethullah Gulen, puts it much better in his message on the day.

Through Alliance for Shared Values, Gulen says: “… Unfortunately, my homeland, Turkey, is at the bottom of the world list of countries for freedom of the press. No voice is allowed, except for the media organs and voices that accept to work as a propaganda tool for the government. It is as if the Turkish society is exposed to a wholesale brainwashing. We must commend the heroic and admirable actions of journalists who had to go abroad to avoid persecution, who are subjected to stalking, threats, and harassment in the places they sought refuge, but who (are) still trying to do their duty.

“On this occasion … I pray to God Almighty to bring us to the days when all fundamental human rights and freedom, including freedom of expression and the press, will be respected and upheld.” Could his prayer have a base? Reporters Without Borders (RSF), in the latest 2022 World Press Freedom Index released to coincide with the World Press Freedom Day and looking at what it calls “a new era of polarization”, have ranked Turkey 149th among 180 countries.

According to shared views, the RSF says Turkey is where it is today because of the ‘hyper-presidency’ of Recep Tayyip Erdogan and his authoritarianism accompanied by a denial of freedom of the press and interference in the judicial system. All possible means are used to undermine critics. With 90% of the national media   under government control, Turkey still experiences a spiral of violence targeting journalists critical of the ruling AKP and MHP alliance.

All these narratives leave Turkey, as a member of global community countries, with nothing but mourning worth celebrating this year’s World Press Freedom Day. Some statistics show Turkey as the world’s second worst jailer of journalists after China. Indeed, God save Turkey!