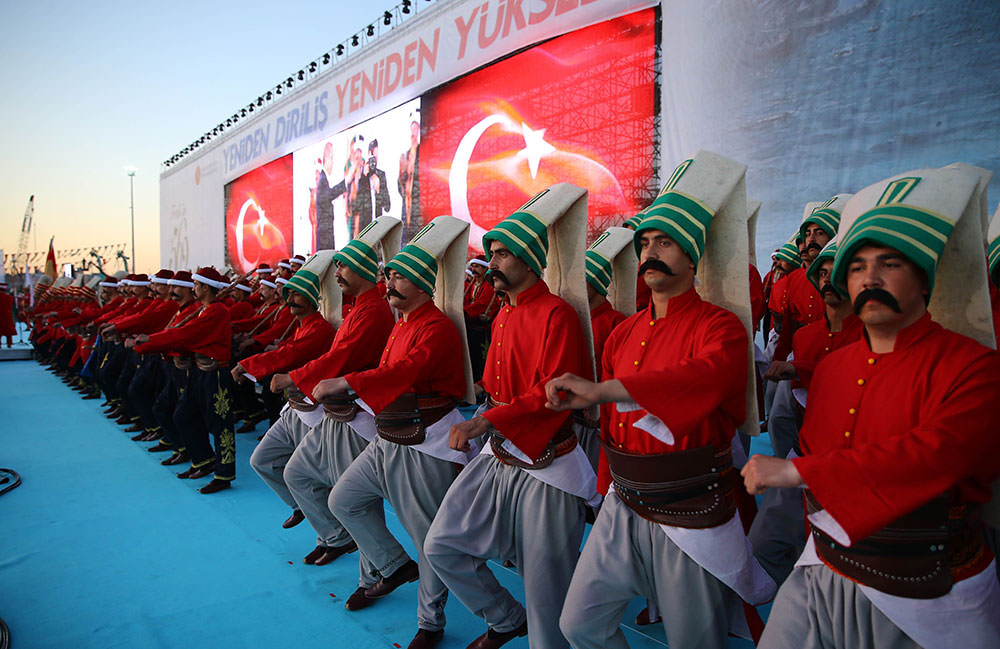 The regime created its own propaganda mechanism just like the Soviet Union did. With only a slight difference; Soviet news agency TASS (Informatsionnoye agentstvo Rossii TACC, Russian News Agency TASS) and the voice of the regime Pravda were the devices of the regime which did not bother trying to hide the central Soviet control as required by the conditions of that particular era. Modern dictatorships act more sophisticated. They gather many news agencies, newspapers, television networks, radio channels, and also social media pages in one place. Therefore, they are able to pump a manipulative and falsified vision of reality, which they call alternative reality, into their citizens. This is a method of indoctrination. In this way, they aim to generate a large mass of people who are loyal to the regime and do not question the views and the tendencies of it.

Russia is amongst the countries that can manage this job the best. After all, they have a totalitarian accumulation transmitted from the Soviet Union era. Aleksandr Dugin clearly states that reality cannot be singular, it has different versions of reality according to every other state, and controlling this reality is one of the main missions of the state. The fact of reality is perceived as a type of diplomatic reciprocality principal. They criticize the news from the West with a suggestion and strategy, which are both against the nature of reality, like compromising on reality. When they say “you criticize our reality” for example, they talk about Crimea, the Ukrainian soil which was occupied and annexed by Russia. According to Russia, such attribution “does not correspond with Russian reality”.

Do you really think that the informatics device of the regime in Turkey works with different principles? Let alone the media and the newspapers losing their objectivities, they also manage to indoctrinate the target public opinions with false news, without the need of any enviably executed camouflage of perception. Such that, the hypnotized masses view Turkey through a fictitious perception. All of the news agencies are managed from a single headquarters with direct instructions. We already observe this in domestic politics. The easiest example is their prosecution politics and human rights violations based on the conception of “FETO”. However, I would like to focus on the contexts of foreign politics and security policies.

I had analyzed how the regime unites the political movements and bases, which are on different ideological grounds, in the same place over the “grand Turkey” discourse. Briefly, the parties, which set the course and fed by different world-views and ideological starting points; political movements; and interest groups virtually united under a common platform in order to constitute a future outside the Western norms. Their common ground is briefly their stance towards the idea of Turkey segregating from the Western defense allegiance. They all imagine a Turkey that advances unaided and independent of the West with their own ideological references; some of them are Islamists, some are nationalist (idealist and Panturkist), and while some of them are left-wing nationalists (nationalitarian, Kemalist chauvinist), others are neo-Ottamanist. This imagination is impossible to become a reality in the long termed and classical role of Turkey for the global security architecture inside NATO. Because the imagination of a grand Turkey is an irredentist and anti-status quo concept. In other words, it is a plan where they don’t want to content with Turkey’s present-day power and national borders, desire more zone of influence and occupy more soil by means of “rising to the extensive” and “taking risks”. There is an unbelievable Western phobia in Turkey originating from the Ottoman Empire tradition. This is something new. Because, even the elite military staff of the Ottomans, who established the republic, did not adopt or resort to such an anti-Western concept after World War I. Furthermore, the people who had such tendencies were considered dangerous. After Enver Pasha, the Turkish military officer profile adopted a standpoint that is far away from adventurousness, down-to-earth, and viewed the inconsistency between the power and the imagination as strategic blindness, and even as treason. This approach seems to be abandoned today. And with the media power imitating Pravda as I have mentioned above, the people are being prepared for irredentist politics.

Bercan Tutar, a columnist who writes about strategy and foreign politics in one of the propaganda headquarters, Sabah, is a good example of such opinions. Tutar has been propagandizing the Eurasianism since July 15th and he writes about the Eurasia strategy quite profoundly. They are consistent and intelligent articles within themselves. However, despite the fact that they are consistent within themselves, it is impossible to state that they are proper analyses which diagnose the real situation correctly and decently. The core of the articles suggests that the global international system is already far away from being mono-centered, and already adopted a multi-centered structure. I have been talking about this since 2006 in Turkish universities and the Staff College. However, I made a parenthesis right after I mentioned this and explained to my students that the multi-well world is not a relationship between the equals, on the contrary, it is a power hierarchy.

All of the Islamist or Eurasianist left-winger authors such as Bercan Tutar, Soner Yalcin, and Burhanettin Duran from the SETA group are like-minded; they think that Turkey developed a profile as a center of power after the end of the American-centered mono-polar world. This is a huge illusion. Because Turkey is a player that has serious weaknesses and is impossible to go beyond being a mediocre power within the multipolar hierarchy. Even if this fact hurts some people, this is the grim reality. In a multipolar world, it is impossible for a player to be a great power without having raw material sources, and especially fossil energy sources. It is nothing but a contradiction to expect a country to be a great power that could not even manage to solve the macroeconomic problems and especially struggles with problems such as worsening devaluation, inflation, recession, and unemployment, and experiencing the calm before the economic crisis.

These authors are aware of the situation without a doubt. However, the necessity of “guidance from the headquarters” requires them to draw a Turkey image far from the brutal facts. They are making their base believe this imagination through the propaganda machine I have mentioned above. I am concerned that this is only a preparation. Just like in Hitler’s days, when Germany was weak, I think that they are trying to sell imagination to the people in order to fuel their dictatorship. Furthermore, I lay weight on the fact that this regime might go on some serious military adventures in order to satisfy this social base. It will be fortunate if these adventures will be limited with small scale operations such as the illegal military interventions on the Kurdistan soil in northern Iraq, or the ground offensives towards the Kurds in Syria! What I mean is the possibility of an expansionist offensive just like Bercan Tutar blurted out recently. The Eurasianist structure, which deepens the relationships with Russia and Iran day by day and especially takes the cooperation with Kremlin as far as edging up with Russia in order to defend the regime, extends the sphere of influence gradually, thanks to Erdogan’s vulnerabilities.

It is a known fact that natural gas sources were discovered around Cyprus. Cyprus (Greek) aims to drill these fossil energy sources in the eastern Mediterranean by collaborating with other countries such as Israel and Egypt, and then sell it in the European market! Turkey is collaborating with Israel and Egypt way lower than its potential. Both of these players use Islamist rhetoric as a tool for domestic politics. Erdogan, who can easily manage to convince the Islamist base to be anti-Western Eurasianists over Gaza and Sisi, receives appreciation in the eyes of his local and foreign Eurasianist partners. Russia has already seen that the natural gas in the Mediterranean will generate an alternative source and this will negatively affect its market share. Therefore, Russia tries to destabilize the Mediterranean through the Russia-Turkey-Syria line by supporting Ankara behind closed doors. On the other side, the US and NATO try to put the natural gas on the European market from the exclusive economic zone in Cyprus with the cheapest and most secure way in order to damage the Russian energy ammunition.

Just like the BTC (Baku–Tbilisi–Ceyhan) pipeline that enabled the petroleum in Baku on the world market. Instead of finding a quick solution in Cyprus and compensating this damage done by this nuisance Eurasianists by turning towards the EU, Turkey narrows the possible options by approaching Russia even more. The deployment of the S-400s in the Mediterranean is a very alarming matter. Egypt, Jordan, Israel, Greece, and Cyprus are starting a military cooperation backed by the NATO members’ camp. And at this point, Bercan Tutar openly supports the expansionist (irredentist) politics and blurts the following out within this context; “We are obliged to follow an irredentist strategy that goes beyond proactiveness at a cultural, political, and economic level in these days where we experience a radical period of change”. This thesis reveals the fact that the plans of today’s Eurasianist junto on Turkey are far more dangerous than we could ever anticipate!

Apparently, the power fracture will happen in the eastern Mediterranean. The bloc of Turkey-Russia-Iran-Syra (and the great player China that will support externally), is the “main others” of the Second Cold War as the neo-axis powers! Turkey loutishly blows the 75-year old strategic Western allegiance accumulation by backing the wrong horse just like it did during World War I. In fact, even if Turkey was correct with the first offensive (20 July 1974), the aperture originated by adopting the second offensive as a status quo leaves Turkey’s fate in the hands of Russia while the tension is increasing in Cyprus.  While the S-400s are being deployed in Turkey’s Mediterranean just like the new Yavuz and Midilli (battlecruisers), the possibility of these batteries to be a new excuse for an irredentist war is increasing. And while the control of these batteries will be in the hands of the Russian expert officers (at least in the beginning), the risks taken by Ankara is visible more clearly.

The dramatic side of the matter is the fact that there is no base in Turkey capable of seeing this trap or standing against it.  While the Turkish irredentism brings the country at an existential crossroads in the absence of democracy, law, and free press, the public opinion in Turkey is just like the dancing passengers in Titanic!