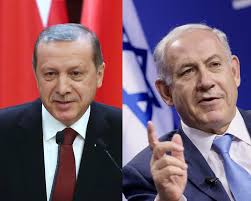 One of the tactics followed by Tayyip Erdogan in every electoral period in Turkey is to point out to his radical followers how intensely he is against Israel. Erdogan actually makes one more thing when he states that Israel is both a terrorist and occupying state. He claims that his opponents actually are the spies of Israel, and blames both Israel and the US that they are cooperating to overthrow him. Does this sound familiar to you? Do these statements remind you Venezuelan Head of State Nicolas Maduro?

While Turkey walks up to the regional elections, which will be held on 31 March 2019, Erdogan tries to demonstrate that he is “the man standing against Israel and the US” every single chance he gets.

Erdogan advised the following to the youth affiliated with his party nearly a month ago: “Do not kick your enemy when you take him down. You are not a Jewish.”

And while he was on his way back from a trip abroad, he said the following to his partisan journalists aboard: “Who are behind the people who financed the terrorists during the 2013 protests (Gezi Park Protests)? Soros, the famous Hungarian Jew…”

Israeli Prime Minister Benjamin Netanyahu states that Erdogan is an anti-Semite dictator. However, although Erdogan yields great political gains by clearly stating that he is an anti-Semite during every other electoral period, he pursues a completely different policy behind the curtains.

Maybe this is exactly why Davide Lerner, editor of Haaretz newspaper, published an article on 22 June 2018 and stated that since Erdogan is watching over the commercial affairs between Turkey and Israel, the best scenario would be for Israel is Erdogan to win the 2018 elections.

In my article, I would like to provide some examples about how Erdogan is a different character behind the curtains, and how he acts like a man standing against Israel before the Turkish people.

Michael Oren, Israeli Ambassador in Washington between 2009-2013, tells a story in his book “Ally”, which was published back in 2015, about how Erdogan creates artificial crises with Isreal for his own political interests.

During the crisis between Turkey and Israel in May 2010, Israel did not allow Mavi Marmara, an aid ship carrying civilian activists, to reach Gaza.

In that period, Namik Tan, Turkish Ambassador in Washington, calls Ambassador Oren and tells him the following:

“Would the Israeli government allow the ship to reach Port of Ashdod, and Kizilay, the relief organization of Turkey, to transport the humanitarian aid cargo to Gaza? Awaiting urgent response.”

Ambassador Oren explains what happened after this communication:

Because Erdogan was going to Iran and that is why Turkish Ambassador expected an urgent response. Israeli government accepted the requests. Ambassador Namik Tan looked very pleased and relieved. However, he called me back in two days. He said Erdogan cancelled this agreement. The ship was supposed to continue on the same path…”

In response, Israel interfered with the ship on international waters on 31 May 2010. Israeli commandos killed 10 protestors during the operation. The testimony of Ambassador Oren dictates Erdogan was responsible for the ship not being able to reach Port of Ashdod without any incidents. Most probably he had taken this decision together with Iran. This incident is one of the most typical examples of Erdogan about his hostility against Israel, and the way he uses Palestine for his own political interests. Because Turkey was on the eve of another general elections at the time, it was not appropriate for the ship to reach the harbor safe, but Israel to interfere with it actually was for Erdogan’s political interests.

After Erdogan came to power in 2002, he has never stopped trading with Israel, which he called a terrorist state during his stump speeches. Shipping trade has been ongoing all the time from Turkey’s Port of Ceyhan to Israel’s Port of Haifa. The oil drilled in the Kurdish region of Iraq was being transported to Israel by ships. As of 2014, the trading volume between Turkey and Israel reached up to 5.8 billion dollars, and this number was actually more than any deals made with the Islamic countries. When Erdogan came to power back in 2002, Turkey’s trading volume with Israel was 1.4 billion dollars.

When the US President Trump announced his plan towards moving the US Embassy in Tel Aviv to Jerusalem, Erdogan, who calls Israel a terrorist and occupying state once again, adopted the same hesitant attitude in order to condemn Israel in the meeting of Organization of Islamic Cooperation in İstanbul, and represented the meeting release divergently to Turkish people. The statement which reads that East Jerusalem is recognized as the capital of the State of Palestine, which was missing in the English text, was added into the Turkish text in order to be used for Erdogan’s political propaganda.

Erdogan did not take any actions after the calls of the opposition parties towards stopping the trade with Israel, and cancelling all of the bilateral agreements. Israeli soldiers killed 60 Palestinians, and injured thousands of them during the protests after the opening of the US Embassy in Jerusalem on 14 May 2018. The only thing Erdogan had done was to hold a public demonstration called “Jerusalem meeting” in Istanbul before the elections, and again, called Israel a terrorist and occupying state.

In a panel discussion on 29 January 2009 in Davos, the best trump card of Erdogan, who had left the panel after saying “You know very well how to kill” addressing Israeli President Shimon Peres, is to keep attacking Israel in front of the cameras, while he markets himself as the “new caliph of Islam”… Erdogan, who had held Israel responsible after Mohamed Morsi was overthrown in Egypt, stated the following on 20 August 2013: “We have documents… Israel is behind the incidents in Egypt…”

Erdogan had stated the following on 15 May 2014 while he was punching a relative of a mine worker, who had protested him during his visit to the city after 300 mine workers were killed in the mining accident: “Why are you running away you Israeli sperm?!”

In brief, Israel is the most beautiful picture of Erdogan’s twofaced political Islamist politics. While he creates artificial crises with Israel by swearing at Israel in front of the curtains to his radical followers, he continues trading with Israel behind the curtains. However, his fanatic supporters still believe that Israel conspires against Erdogan in order to overthrow him every single day.