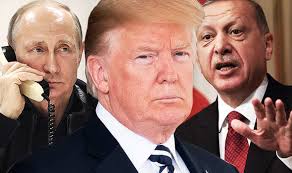 Among the many activities that humans engage in is deciding who governs where and when, in what ways, for which purpose, and with what expected outcome. That decision process is “politics” which has two power objectives; the right to distribute available resources or the opportunity to increase resources within a political entity. Increasing resources is either by stimulating internal wealth creating activities or by raiding the wealth of neighbors and call it a cultural expectation. In their raw form, for instance, cattle rustlings are ways of increasing the collective wealth of one entity at the expense of neighbors.  Successful raiders become “leaders” and heroes.

More serious than cattle raiding is empire building, a polite way of saying international wealth grabbing which has the effect of diverting attention from internal contradictions that might lead to domestic uprisings. Vladmir Lenin, in his pamphlet, Imperialism: the Highest Stage of Capitalism well captured this reality as justification for mounting a communist revolution in backward Russia. It was a simple power grab based on his belief in the control of the “Commanding Heights” that allows the controller to do anything he wants in and out of particular political entities.

Roughly a century later, Lenin-like leaders imagined themselves to control their respective “Commanding Heights” to dominate global zones. Throwing caution out of the window, some are comical and would be entertaining if they were not tragic. They collectively appear contemptuous of “normal” domestic or international behavior and they get away with it. They include Rodrigo Duterte of the Philippines who reputedly has eliminated several people in his campaign to eradicate drugs and does not take kindly to external advice. The United States had colonized the Philippines and tended to advise Manila on governance until Duterte used what US President Barack Obama termed “colorful language” on Obama. Free to do what he wanted, he is like Donald Trump in his disdain for Obama.

Duterte is also like Turkey’s Recep Erdogan, a man who dreams of greatness and would like to be greater than all previous leaders of that region, from Sargon the Sumerian to Kemal Aturtuk. He thinks he can do it through his Neo-Ottoman project of reviving the 19th Century Ottoman Empire. In the process, he has purged independent thinking and former allies in the Fethulah Gulen associated Hizmet movement. He likes building big structures in and out of Turkey. He therefore has a military base and the biggest embassy structure in the world in Mogadishu, Somalia, officially to train Somali security forces. Besides perennial feuds with Greece, he also operates in Libya, picking quarrels with Egypt’s Abdelfattah el-Sissi.

Since, in the 19th Century, Egypt used to be part of the Ottoman Empire, the Neo-Ottoman project might threaten Egypt’s sense of independence. This gives Field Marshal el-Sissi direct interest in Turkey’s activities in “its” region, whether the Mediterranean or the Red Sea. El-Sissi is like Erdogan, strong and intolerant within his country. He was instrumental in removing Hosni Mubarak and the elected Muslim Brotherhood Mossi government in the name of US supported “democracy”. The quarrel between the two strong men, Erdogan and Sissi, therefore, is about perceived national interests and not about ideology or modes of domestic governance. Both are seemingly close to the US strongman Donald Trump.

Like Erdogan, Trump sees himself as a strong leader, boasts about his greatness, and enjoys demolishing “respected” establishment personalities. He claims to be the greatest president that the United States ever has had, and asserts that he is there to right American wrongs. Among those wrongs were immigration policies that had enabled Barack Obama to be president. Subsequently, everything wrong in the United States is Obama’s fault. In part, this is because Obama is black and of Kenyan parentage. The seemingly relaxed immigration policies in the late 1950s had allowed many African students to enter American universities and colleges. Among them were some Kenyan students who increased the number of American citizens with rights and privileges of being elected president. Trump, besides advocating immigration policies that might stop the birth of future Obamas, also demands to be given a “Nobel” peace prize. His logic is simple. If Obama received a “Nobel” simply by getting elected in 2008, Trump deserves one because he supposedly is greater than Obama.

Thus Lenin’s “Commanding Height” philosophy fits Trump’s temperament. Close to the Russian boss Vladmir Putin in ways that annoys those conditioned to have knee-jerk dislike for Russia as a geopolitical rival, Trump has swapped Russia with China as the object of stiff global power competition. His effort to make China a geopolitical villain, however, does not stick very well in part because his domestic and “international” credibility is low. He won in 2016 by being obnoxious and hopes to win re-election using similar tactics. Being politically crafty, he might just pull it.