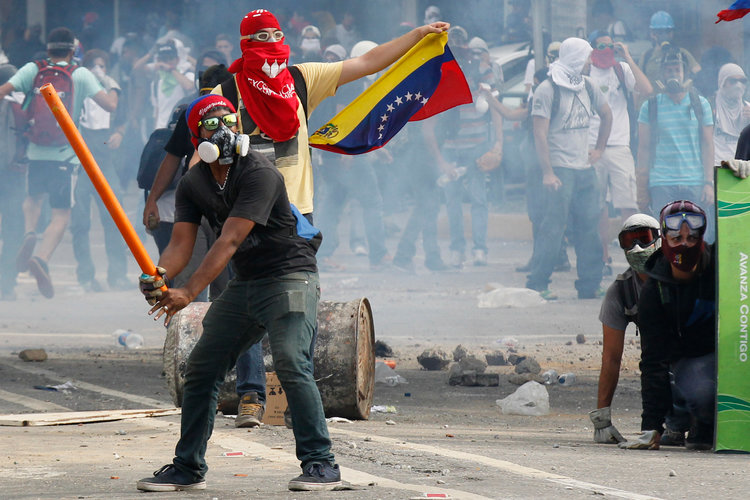 Venezuelan President Nicolás Maduro deserves to be ousted for his corruption and economic mismanagement. However, the push for regime change must come from within. By alleging U.S. imperialism, Maduro has strengthened his position with hardliners, solidifying his base and hold on power.

President Donald Trump’s calls for regime change give Maduro a convenient excuse for his own failings. Maduro blames the United States for Venezuela’s ills. But Trump is not the cause of Venezuela’s problems. Maduro, the dictator, has run a once proud and prosperous country into the ground.

Though Venezuela has the largest proven oil reserves in the world, its people have suffered a dramatic decline in living standards since Maduro became president. The International Monetary Fund estimates that Venezuela’s inflation rate will reach 10 million percent this year. Hyperinflation makes the Bolivar worthless.

Following in the footsteps of former President Hugo Chávez, Maduro oversaw efforts to supersede the legislature, redraft a new constitution, and pack the court with more loyalists. Protests erupted when Maduro was sworn into a second term in January 2019. Trump blasts the fraudulent election as socialist power grab.

Venezuela is experiencing food shortages, which have led to widespread malnutrition and increased infant mortality rates. The public health care system has collapsed. Electricity outages have led to lawlessness and a breakdown of social order. Today, more than 3 million people have fled Venezuela, seeking to escape the dire conditions. Front-line states are reeling from the refugee crisis.

Washington is pushing for regime change, ratcheting-up sanctions and embargoing the purchase of oil and gas. It also has banned the purchase of debt owed to the Venezuelan government, including accounts receivable from oil sales.

The United States recognized Juan Guaidó, head of the National Assembly, as interim president on Jan. 23, 2019. To date, more than 50 countries, including Canada, and many Latin American and European countries have recognized him as Venezuela’s legitimate leader. Only autocracies such as Turkey, Russia, China, Iran, Cuba, Bolivia and Nicaragua stand by Maduro.

Even Venezuelans who oppose Maduro believe the Trump administration is disingenuous in singling him out. They decry the double standard. Trump has a well-known affinity for strongmen. While criticizing Maduro, Trump commends Turkey’s Recep Tayyip Erdogan for doing “things the right way.” Trump says he “fell in love” with North Korea’s Kim Jong Un. And Trump recently invited Hungary’s authoritarian leader, Viktor Orban, to a working meeting at the White House on May 13.

The bromance between Trump and Vladimir Putin is most perplexing. When they spoke on May 3, Putin assured Trump of Russia’s non-interference in Venezuela’s internal affairs; Trump accepted the assurance at face value. He maintains that Putin is “not looking to get involved in Venezuela, other than he’d like to see something positive happen.” Venezuela owes Russia money and oil. It recently initiated security cooperation with Russia, hosting MIG fighter jets. Putin thumbs his nose at the United States. Trump is either naïve, weak, or willfully ignorant of Putin’s manipulation and disinformation.

Distrust of the United States in Latin America is rooted in Washington’s imperial legacy. During the Cold War, the United States supported militaries who overthrew democratically elected governments in Brazil in the 1960s and Chile in the 1970s. The CIA conducted covert activities in Guatemala and El Salvador into the 1990s. Trump’s racist depiction of Latinos, characterizing them as criminals and rapists, reinforces the negative stereotype of gringos.

The Trump administration’s heavy-handed criticism has entrenched Maduro in power. Guaidó’s suggestion that the United States intervene is a fool’s errand. A more subtle and nuanced approach would put pressure on Maduro without galvanizing popular support against American “imperialism.”

This article first appeared at Newsday.