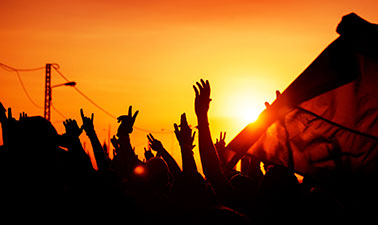 The 68th anniversary for United Nation’s acceptance of the Universal Declaration of Human Rights recalled declaration once again which starts with the following article: “All human beings are born free and equal in dignity and rights. They are endowed with reason and conscience and should act towards one another in a spirit of brotherhood.”

Some Countries Where Human Rights Are Violated

If we look through the declaration considering the countries where the human rights are being violated the most, we can see that the human dignity is downtrodden in East Turkistan, Rohingya, Palestine, Afghanistan, Syria, and Turkey.

The people in East Turkistan is fighting against the de-identification politics of China. According to the United Nations, approximately 1 million Uighurs are being held in the concentration camps, which are called “education centers” by China. The people of East Turkistan, who put up a resistance against the assimilation with their cultural identities, are facing extermination and conversion.

According to the Amnesty International, Rohingya people have been suffering from the human rights violations of the Buddhist junta in Myanmar since 1978, and as a result, many of them immigrated to Bangladesh. As of 2015, Office of the United Nations High Commissioner for Refugees has been helping the people of Rohingya for their repatriation from Bangladesh. However, because of the human rights violations they are subjected to, the people of Rohingya are feeding themselves with tree leaves, and maintain their lives well under the level of humanity. According to the United Nations, the people of Rohingya are the ethnic group that suffers the most in the world.

The longest conflict the world has ever seen is still ongoing between Palestine and Israel. The main reason for their conflict, which has a past of 100 years, is the status of the holy place, Jerusalem. The people of Palestine struggled about colonialism, and the right to determine their own destiny followed by military occupation. Despite the decisions taken by the UN, Palestinians were kicked out of their own country during the wars between 1947-1948. Because of the Arabian-Israeli war broke out later, the Palestinians lived like refugees and slaughtered right in front of the world public opinion, and they are still fighting for their freedom.

Afghanistan has been the focus point of occupations and upheavals throughout the history because of their strategical location, different ethnic groups, and underground sources. The country suffered through fast and staggering changes in recent history. Hundreds of thousands of civilians were killed due to the increasing violence and because of the involved actors. Civilians are still being killed because of the never-ending conflicts. This situation suggests that there is still no chance for somebody to live humanely in Afghanistan.

Peaceful demonstrations had started against the Bashar al-Assad regime 8 years ago in Syria. The people of Syria, who had requested freedom mostly, faced with the armed intervention of the regime soldiers. Until now, more than 350 thousand civilians were killed, millions lost their homes, and cities were destroyed… Because of the intervention of the other countries, a civil war broke out in the country. Unfortunately, thousands of people were killed due to chemical weapons usage.

Summary of Turkey’s Violation of Rights

And in Turkey, babies were sent to prison by the current regime because of the daily-increasing mistreatment, which is being used against everybody who is an opposer. According to the latest date published by The Ministry of Justice, 743 babies are staying in prions together with their mothers.

Hundreds of people were killed because of the armed conflicts in the East and Southeast in 2015. While the children were crushed under the panzers, thousands of people were forced to leave their villages and towns.

In the last three years, long curfews were announced throughout the country with only administrative decisions alleging security concerns. Consequently, the rights towards living, security, health, nutrition, education and travel were violated especially for the people living in East and Southeast regions. The process with the conflicts not only started threatening the people, but also the historic harmony, thousand-year-old historical artifacts and cultural values.

Increasing violations against the right to live, which is the most fundamental right, is at a terrifying level in Turkey, which has been ongoing since 2015

Especially during the last few years, there is an increase towards deaths occurring in prisons because of physical and psychological tortures. Furthermore, a considerable number of kidnapping incidents happened in the last two years. The security units are not acting responsibly for the people, who consult them for help after they cannot receive any news from their relatives who are kidnapped. All of these are happening because of the power-hungry political actors, and the way they cannot tolerate opposing ideas.

The violations against the freedom of press, which is a part of freedom of speech and thought, are restricting the correct enlightenment and independence of the public for receiving intelligence. The arresting of the journalists, who are being arrested for the news they make, is just a current and striking example. This year too, Turkey showed a negative picture towards the violations of the freedom of press, which has been increasing every other year. The regulars inside the courthouses and prisons continued to be the journalists and press laborers. According to the statement made by The Solidarity Platform with the Imprisoned Journalists, 217 journalists are in prison as of November 2018.

The Women in Turkey

Violence and killings towards the women reached to a massacre level. Only since the beginning of 2018, 363 women were killed by men for different reasons. The determined state politics in favor of women being unapplied, and the lack of proper legal arrangements about the problems faced by the women contribute to this situation.

Total number of arrested and imprisoned women in Turkey during the last 16 years increased 375%, and reached to 10 thousand 19.

It is of course impossible to list all of the violations of rights, which virtually became the part of daily life in Turkey.

All of the violations show that Turkey is not organized in accordance with the rights and freedoms listed under the Universal Declaration of Human Rights. Despite all of the unlawfulness, the politicians are distracting the people with the perception they create about waiting at the door of European Union for years.

The people have general rights and immunities received just only by being a human, independent from their political-conscientious and philosophical opinions, ethnic identities, beliefs, languages, genders and colors. Unfortunately, this fundamental reality is not acknowledged enough also throughout the world.

In a world where the elements of material and spiritual cultures are not shared fairly, big disasters await the humanity.

Deniz Zengin is Doctorate Researcher and journalist focusing on immigration and human rights.