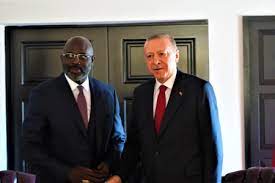 Pliny the Elder, AD25-AD79-period Roman prolific author and father of the encyclopedia series system we use today, had time to say: “Ex Africa semper aliquid novi” – meaning “from Africa there is always something new.”  Taken as a person whose imagination capacity literally went beyond normal human imagination, he coined this Latin phrase imagining that African lions and leopards often interbred.

A vivid imagination or otherwise; true or untrue; the two types of cat similarities and differences notwithstanding, I remembered this Pliny the I Elder’s famous more than 20 centuries’ old phrase when I read an article about Turkish President Recep Tayyip Erdogan “Long Arm” landing on the Republic of Liberia in West Africa. “Turkish Teachers Deported”, read one media outlet headline while the story advanced vague and unqualified “security reasons” as the cause.

I imagined: “Whose security? That of the deportees, education of the Liberian children? Liberia or Turkey?” If it were for the deportees, what justified keeping the adult beneficiaries in the dark about something good which was going to happen for them?  If it were for education, how does one ensure its secure and quality delivery by deporting the providers?  What risk did the teachers and administrators in a government-accredited school pose to the host (Liberia) or home (Turkey) governments? Doesn’t his fit in Pliny’s imagination of African lions and leopards interbreeding?

Despite the direct aggravation of the negative impact this has on Liberia’s recorded poor education delivery performance status on the African continent, my brain jumped to Ankara trying to figure out what was awaiting the deportees, based on the ubiquitous and without-border Erdogan’s vowed confirmed torture reports targeting anybody or group perceived as dissident at home and abroad.

Teachers were deported with their families

As providence would have it, reports have said the teachers, administration staff and other members of their families were deported to neighboring Republic of Ghana, without giving any further details. The narrative sounds like Pliny’s imagination of African lions and leopards interbreeding, this time round, in the compound of the Light International School System (Liberia) which was established in October 2006 to provide an excellent and quality day and boarding education to children of Liberian and foreign nationals.

It all started on April 10, 2022 when a group of Liberian intelligence officials visited the school allegedly on a passports’ checking mission.  Would-be victims smelt a rat but were assured this was a normal practice and their papers would be returned soon. With this, they had fallen into the Erdogan trap.

According to media reports, a week later they received a call inviting them to a meeting. Once beaten twice shy.  They snubbed the invitation.  The next day, shortly before sunset, four plainclothes persons arrived in the school compound in unmarked vehicles. Ten minutes before the victims could break the month of Ramadhan fast, they were ordered to get into the vehicles. They were taken to an unknown destination.

They were not given food or water

Some reports allege they were not subsequently given food or water. Who composed their day’s iftar? They were later taken to the airport, put on an aircraft and flown to Ghana. Victims included one 6th grade and one nursery school children. The most unfortunate aspect of the operation is that it took place on a Friday, the special prayer day for Muslims and during the holy fasting month of Ramadhan for that matter. How less evil could that have been to be a misfit in the Pliny African lions and leopards interbreeding equation? All school activities came to an abrupt end. An emergency parents meeting was called on the following day to deliver the bad news. What a result of the African lions and leopards interbreeding!

World ears must stay turned to Accra for the latest fate of   the deportees. The Erdogan “Long Arm” knows no borders while he remains the chair of Turkey’s committee that schedules the secret service (MiT) cross border abduction operations. Anything can happen.

Traditionally, Ankara and Monrovia have not had something much in common.  In   2017 Turkish foreign minister made a historic stop over Liberia to, among other things, tear apart the Hizmet Movement establishment in the country. Africa’s first woman President Ellen Johnson Sirleaf did not buy this idea. In March 2022 Liberia’s incumbent President George Weah met Erdogan at the Antalya Diplomatic Forum. The two are also on record for having held two informal meetings in Lomé, Togo, and Dakar, Senegal. Weah is reported to have requested Turkey’s assistance in the areas of Security, Infrastructure, Education eyeing technical and vocational and training for the many unskilled Liberian youths. With this he had brought Liberia within the range of Turkish political missiles.

This presented Erdogan with the right time to carry forward his original 2016 plan to crush the Hizmet Movement in Liberia that failed during the Ellen Sirleaf era.  Could the deportation of the Turkish teachers from Liberia be part of George Weah’s submission to Erdogan’s cooperation agreement conditions?   How does this serve the interests of the Liberian people?

As one observer said, this development is sad. “This witch hunt that has been going on in Turkey since 2016 and has made hundreds of thousands of people victims, has also happened in the Republic of Liberia, which got the name from liberty,” the observer put it. Indeed, is it not a slap in the face on an institution which has always stood by and defended education, democracy, peace, fraternity, dialogue, tolerance and freedoms along with other collaborators?

And what could be next in the pipeline? There are already reports of a Liberian delegation set to go to Turkey to work on the cooperation agreement components. If Turkey is what Erdogan is, drones should be on the way “to ward off any possible terrorist activities.”

Is it not worthwhile for Liberia and other African countries to learn from Turkish drones sold to the Ethiopian government? These have been used to deal with the so-called rebels, who turned on the Turkish embassy in Addis, leading to diplomatic operations being shifted to Nairobi in Kenya.

Erdogan is all about personal rather than mutual benefits. NATO and the European Union member countries now know this better. The same applies to Gulen from tortures he has been subjected to by a former ally. If there is anyone who knows Erdogan best, that person must be Vladimir Putin when he warned: “It is very important to understand who you are dealing with”.  African leaders must be careful with Erdogan connections to avoid Pliny’s equation of lions and leopards interbreeding resulting in ambiguous, if not, negative ends. There will always be something new, including the ugly scenes, from Africa.