Was Erdogan and his mob behind the so-called 2016 coup attempt? 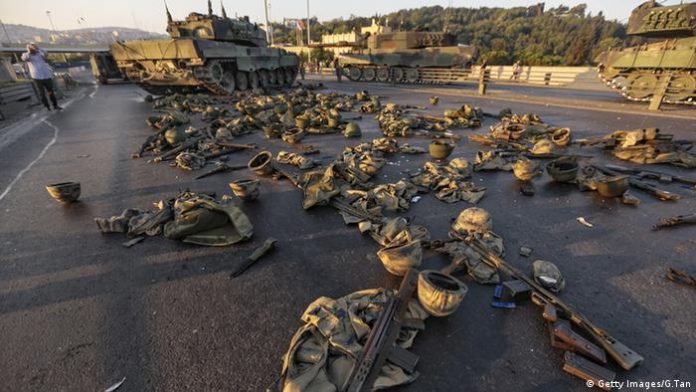 Short of an extra word “really”, thus ran a short and clear, irresistible, far reaching and searching question from an unbelieving, surprised, angered and even possibly somehow depressed Turkish mother. The thing is: “What drove her into making such an inquiry? Her’s was more than the traditional enquiry because it involved death, giving rise to many heart-breaking and disturbing circumstances.

Could her beloved son, with all the good family upbringing, quality education, professional training and trust, an oath of allegiance to serve the government and people of Turkey and the whole of humanity, be party to the evening 15 July 2016 coup that left more than 200 people dead and about 3,000 injured? Could he, therefore, have traveled all the way from the United States to Turkey and gone back without contacting his mother? On which mission could he have been? As a crow flies, Norfolk, his work station in the United States Virginia State, is 5,482 miles (8,822km) from the Ankara seat of the Turkish government.

This mother of the most senior Turkish military officer at the NATO-ACT (Allied Command Transformation) headquarters based in the U.S., Rear Admiral Mustafa Zeki Ugurlu, had turned out to be one of the across-the-board victims of President Recep Tayyip Erdogan and his ruling AKP party post-coup Adolf Hitler style of well calibrated, aggressive and relentless perception management operations and the resulting oppression series.

With or without the coup which the Erdogan regime has ever since domestically and globally blamed on Muslim scholar and cleric Fethullah Gulen, himself living in self-exile in the U.S. from 1999, how does one solve the mother’s equation? The question which actually becomes everybody’s. In the first instance, did it take place? Turkey is the country of coups. Who was behind this one? Who participated? What was the role of Gulen, living more than 5,000 miles (8,000km) away from Turkey? How is it that seven years after, the witch-hunt is still on for perpetrators? How come that a Gulen surname is enough to prove one’s guilt before the law? What disservice has emerged from the practice of the otherwise well-conceived and appreciated Hizmet (Service) movement to warrant criminal charges?

Take it or leave it, Rear Admiral Mustafa Zeki Ugurlu, the son who was dismissed within a fortnight (27-July 2016) after the incident, has equally dismissed the coup as “a diabolic plan (because)…none of what happened that night denoted a coup attempt.” So, who was the devil behind this diabolic plan? Before identifying the ‘devil’, the mother’s question, which is also the world’s question, must be answered. What does the son have to say in response?

“I was in Norfolk, USA on July 15… at the NATO-ACT (Allied Command Transformation) headquarters… We were at a meeting (after which) an associate conveyed some updates about strange things happening in Turkey, that the Turkish Armed Forces had carried out a coup d’état and that the Bosporus Bridge was closed to traffic.”

“I was surprised as I walked to my office and frankly, I did not find the attempt very convincing due to the contradictions in the delivery. I also thought if something like that had been planned, as the most senior Turkish military officer in the US, they should have informed me at first. I immediately tried to reach the Chief of General Staff, my Force Commander, my batch-mates and my daughter in Istanbul, but it was impossible. It was complete chaos in Turkey…”

Literally from the horse’s mouth, Admiral Ugurlu tacitly enlightens the world: “The perpetrators had planned every second, considering myriad alternatives… It would not matter if my fellow soldiers had locked themselves in their homes that night or gone out on the streets to protest the coup attempt or even chanted praises in mosques or evacuated the headquarters and discharged everyone, they would not have been able to prevent what happened.” According to him, the caliber of smart, experienced generals and commanders, with all tools of trade at their disposal would not have done and would not have planned none of what happened that night. It was a planned to fail coup and had nothing to do with the Armed Forces.

The Admiral observes that those who planned it “left much evidence in their wake… Some unusual, simple and serially strange events incompatible with military doctrines and norms kept on happening. None of what happened that night denoted a coup attempt. I mean if you wish a coup to fail, you conduct it in an evening when everyone is on the streets.

“If you want to guarantee this failure, you close the Bosporus Bridge to traffic in a metropolis like Istanbul or hand 13-year-old cadets guns without bullets, or if you want to lose sympathy of the people and to provoke and instigate them into resistance, you bomb the national assembly. If you wish to fail, you do not touch political figures and do not impose a serious restriction on the press…If you want to guarantee the failure of a coup, you plan such.”

The term ‘controlled coup’ is a mild one

Now that we know this was an inside job, how has the world come to be misled to shift the blame on scapegoats? The Admiral further observes that in order to fully understand how it was planned and executed, “the term ‘controlled coup’ is a mild one; they had placed at least two intelligence operatives in each squad. The coup was more than controlled.

“There were relentless perception management operations. Despite hundreds of contradictions, some of our associates unfortunately believed or had to pretend to believe this imposed coup story. The differences between the things said to us have happened that night and what actually happened surfaced months later.

“That time, the authorities increased the dose of oppression. They enacted laws and suppressed the courts to protect the actual criminals, the torturers. They hindered the probes. They silenced journalists and litigators who did not enter their wake by threatening and arresting them. They implemented such an effective information war that everyone, including the opposition, was made to believe in the imposed story. Even though she knew I had been abroad, even my own mother asked: “Son, were you here that night?”

The coup hatchers had their own ultra-motives. The Admiral further illuminates: “No matter if any fellow soldiers would even recite praises from the minarets, they would still be arrested…they had manually added my name on the profiling list…1,600 of our friends have been sentenced to life imprisonment.” In the post-coup witch-hunt, he later saw his name added to the Excel spreadsheet manually… “So I had been one of those profiled in the last minute to be dismissed.

“In the days that followed, 80% of my associates who served with me at the NATO Headquarters shared the same fate. Even some who had been appointed in our places and started to work abroad were summoned to Turkey and arrested immediately…” Colleagues who, like him, were not on site – “some of them on leave or attending meetings abroad — were not spared. They were arrested, charged and are serving aggravated sentences.”

Admiral Ugurlu laments: “…Our homeland (has) distanced itself from the …path charted by Ataturk 100 years ago”, leaving them to establish cultural and emotional links. Those in power are heedless, astray and treacherous.” But he has not given up. “I look forward to my day of homecoming”. Yet there is one thing he refuses in the present Turkish circumstances: “I cannot salute the current regime,” he categorically states.

Hardly within a week’s time (19-May, 2022) Turkey will be marking the Youth and Sports Day, a national holiday on which the young people stage sporting and cultural activities nationwide.  This is on the dedication of Mustafa Kemal Ataturk, the founder of the Republic of Turkey. One should wonder what the current regime could tell the Father of Turkey when more than half of the youth prefer a life outside their homeland.

All said, 2023 parliamentary and presidential elections are around the corner. How far are the people of Turkey comfortable with keeping the ‘devils of the coup’ – the anti-Ataturk — in power?  That is the question.