HomeExpertsWhat Happened to those Children Festivals of the Days of Yore?
ExpertsTop Stories On Turkey

What Happened to those Children Festivals of the Days of Yore? 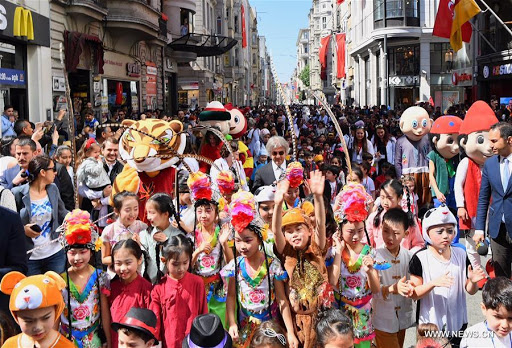 Annually celebrated with enthusiasm and excitement by millions of children across Turkey, April 23 Children’s Festival is the world’s first official children festival. This day was gifted to children by Mustafa Kemal Ataturk, the founder of the modern Republic of Turkey, in commemoration of the opening of the first Turkish Grand National Assembly on April 23, 1920 in Ankara. April 23 National Sovereignty and Children’s Day marks a profoundly special day in the history of the modern Turkey and has been celebrated as the Children’s Festival for the fact that today’s children are the future leaders of a country.

On April 23, every school across Turkey is festooned with banners and decorations. As a tradition, children replace the state officials in their offices and become the President, cabinet ministers, governors, and the speaker of the Grand National Assembly every year for a day. The day’s young dignitaries sign some official documents related to the children and education rights.

For the last couple of years, Turkey has changed a lot and so has the National Sovereignty and Children’s Festival. In the wake of the July 2016 failed coup attempt, the incumbent Erdogan regime started nationwide and cross-border witch-hunt operations against millions of people and detained around 600.000 people from every walk of life across Turkey. The ongoing repercussions of this witch-hunt has been affecting millions and especially the children who are the most vulnerable group along with women, the old and the sick. Gone are the days we used to see children beaming with smiles on the broadcast and alternative media; the snowballing political and social crisis in Turkey landed a hefty burden on the shoulders of children who are stranded and oppressed in a stifling environment that also takes its toll on their and their parents’ health and wellbeing.

Such perpetual problems and lack of solutions make Turkish parents pessimistic for the future of the Turkey. This is why, all with ways and means endeavor for sending their children abroad, especially to the Western countries. While it was a tradition to send the youth abroad for language education; this time, it is a different story as parents with means simply wish their children to go to abroad and settle there.

As thrill and joy permeate the annually-held April 23 National Sovereignty and Children’s Festival celebrations, TV channels traditionally invite children to their shows to interview them about the significance of the day and their dreams about the future. I remember: During one of such April 23 TV shows on the NTV, a private TV channel in Turkey, the host was interviewing children one after another on a lush-green lawn. When she interviewed a young teenager named Arife Vildan Bakar, the following interesting dialogue took place (https://www.youtube.com/watch?v=7nEu-_bdQ7E):

Teenager: I want to study medicine at the University of Cologne in Germany. Afterwards, I might become a German citizen.

This show and the teenager’s off-the-cuff response were discussed a lot on every platform in Turkey. For sure, the children and the teenagers who had been hosted on that show were not ordinary. One could realize the intellectual level of the teenager even from her response to an otherwise run-of-the-mill question. What people normally think about the children of the elites that they may go to abroad for higher education or language education but not for seeking citizenship. When the teenager blurted, “I might even consider getting German citizenship after receiving education from a German university,” the host and the other participants were visibly taken aback. Just like how Jalaluddin Rumi said, “The word is like a fired arrow. And never had the arrow returned,” teenager Arife fired the parting shot and left the host with nothing much to say afterwards.

Was she wrong to think this way? No, not at all. She just unconsciously reflected the psychology of the young people in Turkey. Everyone, be they young or the old, got bored of the oppressive politics of the Erdogan regime. Everything including the freedom of speech is restricted in Turkey. People cannot breathe freely, cannot do whatever they want, cannot read everything, cannot criticize how they governed. How can people survive for long under such conditions characterized with restrictions and intimidations?

After the failed coup attempt in July 2016, hundreds thousands of people were been detained, arrested and imprisoned by the despotic Erdogan regime. Those people were detained on charges of their affiliation or sympathy with the Gulen (also known as Hizmet) Movement. People were arrested on a variety superficial charges including but limited to: having a 1 US dollar bill in your wallet or at a corner of your home, educating your child(ren) at the educational institutions affiliated with the Gulen Movement, depositing your savings in Bank Asya – a mainstream financial institution founded and operated in line with laws and regulations – and discontinuing your subscription to a particular digital TV platform within a particular time bracket known only to the regime-tutored judiciary. If anyone was sympathetic with any institution or participant of the Gulen Movement in any way, that sufficed for warranting their long-term imprisonment them even while they had no criminal record.

Thousands of parents who had affiliation with the Gulen Movement were arrested without having committed any crime and were imprisoned categorically. When both parents were incarcerated, their children were left unattended and abandoned to extreme hardship. Currently, more than 700 babies and toddlers stay with their Hizmet-inspired mothers who are incarcerated in Turkish prisons. Older children are handed to those immediate relatives who dare to come forward and claim those helpless children as their nephews, nieces, grandsons, and granddaughters. While they wait for their parents with their eyes in tears, thousands of Turkish children undergo an extreme trauma and look forward to being united with their beloved parents.

Numerous children lost their lives while fleeing along with their parents from Turkey where they were subjected to oppression in the claws of a relentless witch-hunt.  Some of them breathed their last in the River Evros on their quest for freedom, some died in agony at hospitals while longing for seeing their imprisoned parents for the last time, and some struggle against cancer all by themselves and just need their imprisoned parents by their side so that they may cling to life once again. Hakan is just one of them. Activists and citizens from all walks of life have been campaigning for him on the social media to have her imprisoned mother released immediately. Regardless of their sociopolitical backgrounds, people’s hearts beat as one on the common denominator of humanity and universal love for children as they appeal to the incumbent regime in Turkey to release Hakan’s mother who has been politically imprisoned on charges of her affiliation with the Gulen Movement. The government has not responded to these appeals so far. Erdogan led rallies against the participants of the Hizmet Movement during the inception of this witch-hunt by the stern order, “Do not let them drink even a single drop of water!” Children are dying… People are dying in Turkey and no one is able to do anything.

23 April National Sovereignty and Children’s Festival looms on the horizon, but it does not make all children in Turkey happy anymore. The stifling atmosphere drives people to the edge of madness, while the regime keeps on driving faster towards the eve of destruction. The engine has already run hot and the valves keep on popping out one after another. In the face of the unbearable course of events, even the government’s stooges organize schemes to flee Turkey and seek asylum in Europe. The more the Erdogan regime tightens its embrace on the people of Turkey like a jealous lover, the more people wishes to evade yet another incapacitating kiss and to rid themselves of the Erdogan regime’s oppressive measures. While the children of the elite who are selectively admitted to the Children Festival-themed TV programs speak their mind so unreservedly, God knows what the rest of the children in Turkey have to say about their future.

Back in 1977, a chart-topping Turkish song, “Benim Balonlarım Vardı” by Ibo summed up this peculiar longing for the children festivals in the ‘days of yore’:

“Where are those child-faced festivals now?

Where are the children, the child-like loves?

Are they gone or will those days come back again?

Where are those fairy tales, loves, and hopes?

We used to believe all the tales that we were told

Did they deceive us or were we deceived?

We would wait and live for the festivals

Have the festivals aged or have we become old?”