HomeExpertsWhat was the 2019 Kuala Lumpur Muslim Summit about?
Experts

What was the 2019 Kuala Lumpur Muslim Summit about? 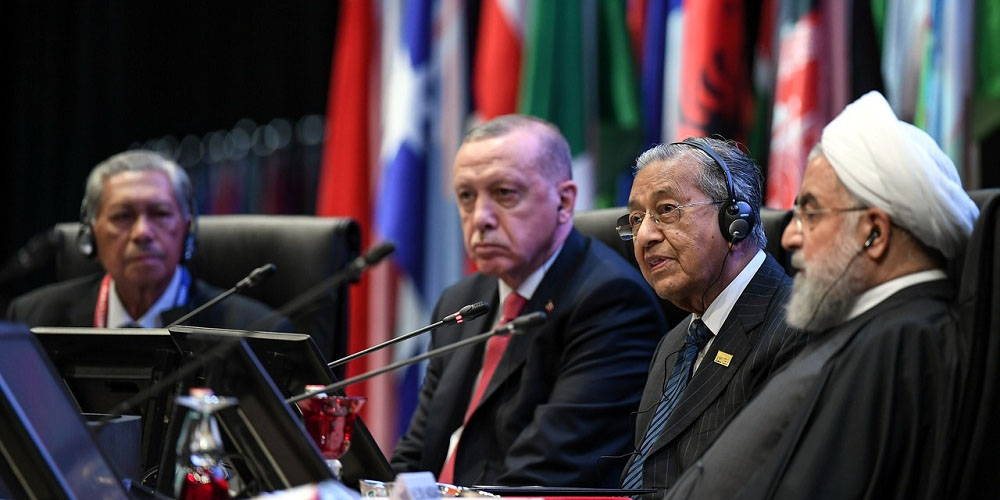 How meaningful was the recently concluded 2019 Kuala Lumpur Summit which had only key leaders of Iran, Turkey, Qatar, and Malaysia as key participants, with the other forty over countries not interested in what they see as Malaysia trying to create a new Muslim bloc, stealing the thunder from Saudi Arabia? That country with a monopoly of the Islamic historical-legacy and the OIC (Organization of Islamic countries) is angry at the gathering of the “triple-nation-alliance of Turkey-Iran-Qatar,” being hosted by Mahathir’s Malaysia to perhaps challenge the hegemony of the Saudis.

But Iran and Turkey are troubled democracies, aren’t they? And Qatar is a supporter of Assad’s Syria. Essentially, the issues in the Muslim world are perennial and the word “ummah” is merely a nice thing to utter for religion to be used for global political ends. One needs to have a mastery of Complexity Theory of International Relations it could seem, to understand the Muslim world of today.

Is this summit, the fifth in the series of Muslim-improvement-plan summits, yet another time and money-waster for Malaysian, in which the speakers were merely bringing in stale and outdated proposals devoid of a good understanding of international affairs, let alone globalization, a process that has been happening for thousands of years – and one that pertains to Islam and its declining influence since the fall of the Ottoman Empire?

I recall the narratives on meaninglessness put forth as a philosophical argument by the Nobel Laureate French-Algerian philosopher Albert Camus whose analysis of the myth of Sisyphus speaks to the modern man, concerning the issue of depthlessness.

In this case, what was  the KL Summit about? An ego trip of a few leaders, all guilty of overstaying their welcome and all having major issues with the people they govern, namely the issue of the fear of relinquishing power, while the people are forced to roll the rock up on the hill, daily, like the Camusian hero, Sisyphus.

Is there a “Muslim country” today worthy of being spoken of as a model democracy?

Real Muslim leaders don’t cling on to power as long as they can.As long as they can use the ideological state apparatuses to even avoid prosection.  That’s not democracy in Islam, is it? Today’s “Islamic countries” are essentially images of decadence, degeneration, and dictatorialism. So, in the KL Muslim Summit, what will, for example, Turkey’s Erdogan say about Islam, world peace, and torture in his own country? What about Iran and its problem with theocracy and the extreme moral policing it has engineered, in the name of the “Islamic republic”? And of course what about the image of Malaysia’s 94-year-old Mahathir Mohamad who returned to power after iron-gripping the country for 22-years in his firs tenure, and now refusing to leave office to give a chance for the younger leaders to shape the nation, in his second tenure? What would Prophet Muhammad say about these leaders?

When there is too much obsession with Arabic culture mistaken as Islamic culture as standard bearer of religiosity and piety, and the adoption of the disabling and violent strands of “Wahabbi jihadism”, Malay culture — or any for that matter — will be destroyed. Reclaim authenticity now.

The problem with the Muslim leaders is that they have created huge problems for their people and the religion. A brand of sane democracy is possible in ‘Muslim countries” if religion is separated from the state. Learn from Thomas Jefferson’s USA.

In this sense and in the context of the KL summit, what can Malaysia learn from Turkey and Iran what she has not learned from Saudi Arabia and Pakistan? Ayatollahs and dictators won’t teach us about true democracy in Islam, would they? Besides, how do you reconcile the Malaysian government’s stand on the Syiahs’ in Malaysia when Iran is invited to the summit?

In Malaysia, the followers of Syiism are persecuted and the ideology vilified. A leader of an NGO, suspected of spreading this ideology has gone missing for several years. There is also a pastor whose whereabouts are not known. Both are allegedly kidnapped by the government, in an attempt to curb the spread of both Syiism and Christianity. Today, Malaysia is plagued with the ideology of Wahabbi-ism.

Islamic World Summit in Malaysia seems like a climb of Camus’ Sisyphean hill, where we roll the rock of life up, t have it roll down at the end of the day, daily, while dictators and despots use religion to practice the lessons of Machiavelli.

In the summit, would they talk about the so-called “Uyghur concentration camps”? Or will there also be talk about China fighting Uyghur-Muslim poverty and terrorism in Xinjiang.

China is fighting terrorism, not Islam, I believe. From the time of Admiral Zheng He (Cheng Ho) the eunuch of the Ming Dynasty Islam is a respected religion. Not Wahabbism. There are “jihadists” amongst the Uyghurs in Xinjiang. In Kashgar, 1990-2016 was a period of attacks. And chaos. China’s fighting Uyghur jihadists, not Xinjiang Muslims who are living in peace and prosperity.

Leaders and their well-fed scholars cannot continue to do research with confirmed biases as methodology. There are perspectives to consider, especially in today’s cybernetic environment of fake news and post-truth.

What should be have been discussed?

Before the summit, I wrote that The Muslim Summit in Malaysia should discuss how to stop leaders from staying in power way too long. These leaders should champion Islam by releasing it from State bondage. They should learn from the Lutheran-Protestant Reformation Period and engineer a total philosophical change to stop the religion moving backwards spirally downwards ideologically..

The idea of an Islamic “ummah” is never clear nor possible, yet used liberally and abused as wrong but useful rallying propaganda today, to heal that sense of loss of empire, that nostalgia of a glory tainted too with the abuse of power and many a sultanic narcissism plagued with internal chaos as well. This is perhaps especially after the collapse of the last “Islamic Empire” the Uthmaniyyah. Muslims don’t need to belong to an “ummah’ of “we vs them”. Each Muslim is an individual to flourish naturally, learning from the immense experience of the cultures of one another, from whatever cultural philosophies people of nations spring out from. Today, Muslims wanT to be free from the fear of Islam-rationalized terrorism. Of jihad as a struggle, marinated with terror and marketed as a global product.

Poverty is the root cause of terrorism. Neo-colonalism and the global-corporate-oligopolic ideology is another one. Lack of education, miseducation and strict theological and indoctrination education are too. In essence, the problem is poverty of basic needs, knowledge, and an understanding of religion.

The KL Muslim Summit should discuss how Muslim leaders terrorize their own people, how to depose them, democratically preferably. But in “Islamic countries” today, you can’t get rid of impeachable leaders. Bad democracy installed via abuse of religion. In this respect, I’d say: get the two-term-limit for the prime ministership installed fast, Malaysians.

There is a proposal to buy and trade with Muslims only. Imagine a world with “Muslim-only trading and technology”. We’d be camel riders on the Silk Road again. Hello Genghiz Khan!

The KL Muslim Summit is like a “Muslim Brexit” for Malay-Muslims, essentially. It is an exit from reality. What Muslim countries need to talk abou now is less of concern for the “ummah” but more for the advancement of “humanity”. We have major world issues to address that are blind to religion, race, color, creed, and national origin.  Did the Quran not speak about Man as having been created of different race and nation, so that we may learn to care for one another?

That is a clear enough statement of cosmopolitanism, rather than ethnocentrism.