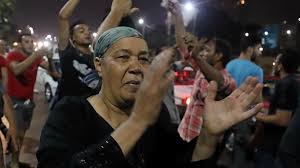 The people of Egypt are facing hard times as they continue to relive the pain that was once history, witnessing street protests again.

Transition from Mursi to Sisi

On 3rd July 2013, under the leadership of Egyptian army chief General Abdel Fattah el-Sisi, former president Mohamed Morsi was removed from power and the country’s constitution was suspended, to which the latter condemned and labelled the move as a ‘coup’.

Following the coup, Mohamed Morsi was removed from the administration and Sisi moved to establish a transitional technocratic government to take the country to elections. Morsi was then taken to an undisclosed location by the army and was not heard of for weeks.

With the disappearance of Morsi, his supporters took to the streets again in Cairo demanding that Morsi be released and reinstated as president.

Morsi, elected by popular vote, was accused of espionage and conspiring with foreign militants and  allowing the mass escape of Muslim Brotherhood prisoners, before moving towards overthrowing the former president Hosni Mubarak back in 2011.

Following the charges against Morsi, a decision of execution was issued, but was later overturned by the Supreme Court of Egypt and Morsi was sentenced to life imprisonment for crimes of terror.

Former leader of Egypt, Mohamed Morsi (68) died during a court hearing in June 2019. However, the absence of any video footage has left question marks.

The man behind the protests can be traced to Muhammed Ali, businessman and actor, now self-exiled in Spain.

In recent years Egypt has followed an economy saving policy, however, Muhammed Ali’s videos on social media has shown that while the Egyptian people live in poverty, the country’s leaders are living a comfortable life, spending on luxury hotels and residences.

Muhammed Ali stated, in a series of videos broadcast on his Facebook page since September 2nd, that he was left disappointed and forced to leave his country. Ali said his decision to leave the country was out of fear and that he is still owed millions of dollars for work he did for the Egyptian army.

Ali’s videos have led him to worldwide recognition and has become a leading anti-Sisi figure. In his videos Ali accuses President Sisi and top commanders of the Egyptian army of corruption. His accusations backed up by documents and details have continued to attract attention.

Soon after the Sisi administration came into power, the right to protest became more difficult. While government officials were trying to censor videos, hashtags including ‘Sisi Out’ and ‘The People Want To Overthrow The Regime’ started trending on Twitter in Egypt on Friday, September 20th.

Protesters against the regime gathered in and around Tahrir Square, a key location for the 2011 Egyptian revolution, despite strong pressure from the authorities. Thousands called for Sisi to resign but was curtailed under strict military intervention, with over two thousand being detained for participating in the protests.

Despite strong intervention and detentions, the voice of protesters have only gotten louder, as demonstrations were staged in other locations around the country, inlcuding Egypt’s second largest city, Alexandria, and in the town of Mahalla al-Kubra, north of Suez and Cairo.

Barricades and checkpoints were set up in the surrounding streets, and the Nile Bridge was blocked from traffic on Friday afternoon with three subway stations under the square being shut down. Security guards frequently searched pedestrians at checkpoints.

Security forces responded by firing tear gas in a bid to disperse the protesters. Civil society groups observed many people were detained including high-profile activists who seemed to have never participated in protests before. Human rights organizations have put the number of detainees at over two thousand.

As protests intensified, President Sisi was in New York for the United Nations General Assembly. Sisi labelled the demonstrations as ‘Political Islam’ and upon his return to Egypt smiled, stating, “There is nothing to worry about.” Egypt’s pro-Sisi media continue to portray the country as safe and under control, while the government has requested international media not to exaggerate the proceedings in the country.

One vital reason behind businessman Muhammed Ali’s claims taking precedence is due to the prevailing economic situation in the country. Reports state Sisi’s popularity is gradually declining as the Egyptian currency continues to fall, with the country facing an economic recession; this is a result of the implementation of a strict austerity policy.

Although current demonstrations cannot be compared to the revolution in 2011, questions have been raised, ‘Will Egypt be the second Arab spring?” Human Rights Watch (HRW) has called on Egypt’s western allies to be alert over human rights violations, while the United Nations has expressed concern about the numerous detentions and has asked the Egyptian government to respect demonstrators.