Why did Erdogan call a well-known journalist, Dr. Bulent Kenes, a terrorist and want him deported by Sweden? 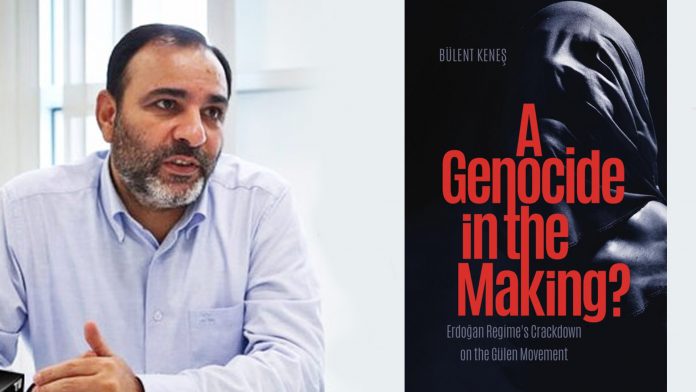 Turkish President Recep Tayyip Erdoğan has demanded the extradition of a Turkish journalist in exile in Sweden whom he called a “terrorist,” during a meeting with the country’s prime minister in Ankara.

Swedish Prime Minister Ulf Kristersson was in Ankara on Tuesday, hoping to persuade Turkey to drop its opposition to Sweden joining the NATO military alliance, with Ankara accusing Stockholm and Helsinki of harboring political dissidents who are labelled as “terrorists” by Turkey.

Among them is journalist Bülent Keneş, an academic and the former editor-in-chief of the now-closed English language Today’s Zaman daily, also an outspoken critic of Erdoğan’s government.

‘Bulent Kenes is a great scholar, a critical-thinker, a journalist and a published author who successfully documented what is happening in Turkey is a genocide. That’s why they want to punish him, says Aydogan Vatandas, editor-in-Chief of Politurco.com.

‘Bulent Kenes provides a ten-stage genocide checklist for the Gulen Movement by the Erdogan regime, including profiling it over years before taking action, labeling it as terrorist, discrimination, dehumanization, state aligning with jihadists and utra-nationalist groups, polarization, persecution, extermination and denial.’ says Felix Kaiza, columnist for Politurco.com

It is well known that the Turkish media has been under surveillance for years, and journalists in Erdogan’s new Turkey work in the shadow of prison. The Erdogan regime is more focused on silencing or at least controlling the opposition media platforms, although the country will hold a critical election for Turkey’s future in less than a year. To ensure victory in the election and consolidate its power, the regime treads with sure steps and explores new ways to oppress and control the media.

The censorship law passed by the Erdogan regime on October 13, 2022 introduces newer draconian measures to clamp down on freedom of speech and deepens online censorship, restricting access to accurate information. According to Human Rights Watch, the new law entitles the incumbent regime in Turkey to:

These fresh restrictions by a regulation dubbed as the ‘Censorship Law’ will render independent journalism and media next to impossible in Turkey. Hence, the international community complained about the repercussions of this law. The Venice Commission, the Council of Europe’s expert legal body, issued an urgent opinion stating that the media regulation law in Turkey threatens the freedom of expression.

The Erdogan regime did not feel the need to silence and suppress the media during its first decade in power. What changed and why regime officials needed to pass such a draconian law are not mysteries, but a speculative necessity for the regime to tame and indoctrinate social media and its influence across the country. As you may recall, the regime forcibly seized and shuttered dailies like Zaman and Bugun, besides hundreds of media outlets, including terrestrial/satellite TV networks like BugunTV and SamanyoluTV, while hundreds of Turkish journalists have been imprisoned since 2015. Until recently, the majority of media platforms were within the borders of the country, making it easy for authorities to exert pressure and control over them as they wished. The regime seizes and closes those it cannot control. I know it sounds strange, but Turkey has especially been ruled in this manner for the past ten years. A former Erdogan regime interior minister had ordered to police, “Break the doors and arrest the ‘suspects,’ even if it is illegal; we will bend the law to accommodate it.” This explains the mode of governance in new Turkey.

What changed and why a new law is needed to ‘regulate’ the media and public sharing of opinion beg extensive discussion. Having consolidated its sway upon all segments of the Turkish society and political sphere, the Erdogan regime has long not been considering the legitimacy of its actions. While its power erodes, it runs the country by perception management and justifying oppression as ‘national will’. With its vote base fast disappearing in the polls, the Erdogan regime shifts gears to divert people’s attention and regain popularity through political maneuvers.

There are numerous reasons for the Erdogan regime’s intense endeavor to win back the majority: First is people’s tanking confidence in the ruling party AKP and Erdogan himself due to the nosediving economy. Turkish people, similar to many nations worldwide, are indifferent to social injustice and victimizations as long as they are not hurt in financial sense. In the words of late Prime Minister and President Suleyman Demirel, “Empty pots overthrow governments” and no regime can remain in power and not be criticized for its stark wrongdoings. Second, tired of trite and excessive pro-regime media outputs, people increasingly turn to social media and online sources for alternative news. Here’s where the government fails in its seizure and closure tactics different from the local media outlets.  Thirdly – and this may be most important reason – the government cannot counter the rise of the popularity of the exiled journalists abroad. For all these reasons and many other concerns, the incumbent regime has needed something ‘official’ so as not to lose the coming election. Introducing the so-called legal regulations serves only to veil the wrongdoings and corruption of the current regime.

Turkish journalists who live abroad and broadcast their dissenting views on their online channels is a matter of constant upset for the regime in Turkey. This is why, the regime implements its intelligence operatives to mob and threaten the Turkish journalistic diaspora especially in the European countries. Several renowned journalists in Europe like Cevheri Guven, Abdullah Bozkurt, Levent Kenez, Ahmet Nesin, Ahmet Donmez, Erk Acarer, and Bulent Kenes attract millions to their social media accounts and online channels with their principled investigative journalism and earth-shaking dossiers. Their effective journalism spells another big ‘threat’ for the Erdogan empire. This is why, the ‘palace state’ takes actions to harm these journalists or inflict fear to stop their activities. I placed what happened to these journalists within last months under two categories as home and abroad:

All these incidents indicate that exiled journalists will be under close surveillance which may even led to life threat risks. This is another level in the war of good and evil for the future of Turkey. The Erdogan regime fears of losing the power and that makes them into villains who could do anything to stay on power. Last two months, the mobbing and attacks to exiled journalists grew in number and that could be riskier as we get closer to the election date.

Erdogan wants to win the election no matter what. The tension among the public increased enormously. Restrictions on the media are at the highest level, including imprisoning journalists, shutting down the media outlets, and restriction of spreading any news on any platform. The regime believes that using the court stick to manipulate the public mind would work. We hope nothing happens to the journalists at home and abroad, but we will see a tsunami of anger waves from both sides in the war of good and evil until the election time.