Why Erdogan sides with Maduro? 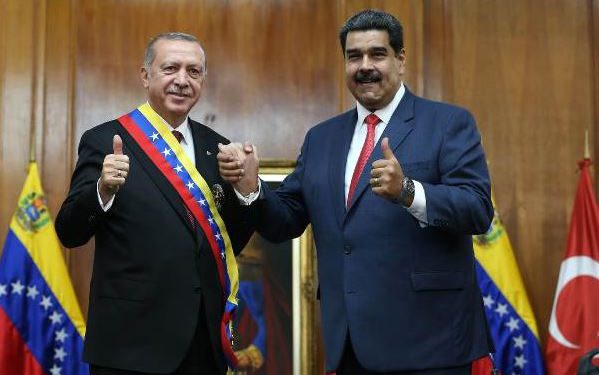 A huge opposition protest held January 23th against Nicolas Maduro due to his mishandling his government led to the country into hyperinflation, massive purge, and corruption.

Maduro called Guaido “a puppet” and blamed the United States “imperial government” orchestrating a “coup” attempt “against” to his country. Said to a gathered crowd who came to support him.

He further gave 75 hours to the United States diplomats and consular staffs in the country to leave.

The reaction came from U.S. Secretary of State Mike Pompeo said Maduro is not in a position anymore to do so and Marco Rubio, Senator of Florida tweeted,

(“Se acerca el Invierno”) with Maduro picture in both Spanish and English.

However, there were also a handful of countries who hailed Maduro and express their strong support and wishes. Along with Russia, China and Bolivia, a country which most of you will not probably give a haunch supported him more than the forever amigos of Maduro was Turkey’s president Recep Tayyip Erdogan.

Erdogan and his cadre defended him in so amiable and staunchest way, over the phone with a soothing and daredevil voice told him “my brother! Don’t step down, stand tall, I and Turkish people are with you” Turkish President Spokesperson Ibrahim Kalin tweeted Thursday with a #weareMaduro hashtag

Pro-government media which there are no almost anti-government media in Turkey- went on #weareMaduro broadcasting Venezuela with supporting news. The hashtag got trend and word of mouth in Turkey. In exchange, Maduro thanked Russia, China, and Turkey and said “we are not alone”

In reality, more than half of the Turkish population couldn’t still get anything out of that “brotherhood” bound with Venezuela. Where is Venezuela? or who is the Maduro anyway, will not ring a letter bell to most of the population of Turkey but to many now Venezuela is right at the corner and Maduro is one of us.

Erdogan made a splash created a narrative that his staunch party members and voters will fall for as he nonstop does, he has been painting his rhetorics with the same “puppet”, “imperial” “against” and of course “coup” as Maduro stroked with the same brush. Supporting Maduro meant for Erdogan’s –my people he names- voters a leader against coups and other countries involvement no matter to whom and in which part of the world it is occurring.

Now the question is, why and what on the earth, Erdogan is fervently supporting Maduro and even ruling party members turn into Maduro identity?

Reasons are many both economically and politically but Erdogan’s siding with Maduro contains two messages, one looks into internal politics the other one to external. Before heading to the local election in March, Erdogan would not miss this opportunity to prod his voters to remind the July 15th contentious coup attempt to his government, making a parallel with the crisis in Venezuela. He assumes that by showing his voters American involvement in the crisis in Venezuela, he will be able to convince that USA and European allies were behind the coup in Turkey as well.

Economically, Maduro has gold and oil. Erdogan wants to benefit from both, especially from the gold as Turkish economy crumbling. It is known that Turkey is a safe box for Maduro’s nuggets. If he is gone, the new president will demand the Maduro golds from Turkey which belongs to the people of Venezuela and another case of Reza Saraf may undergo. That may be the fear.

As externally siding with Russia and China, two member countries of Security Council as Britain is quite so far. Erdogan sees it a balance satisfying the anti-western block for tottering Maduro.