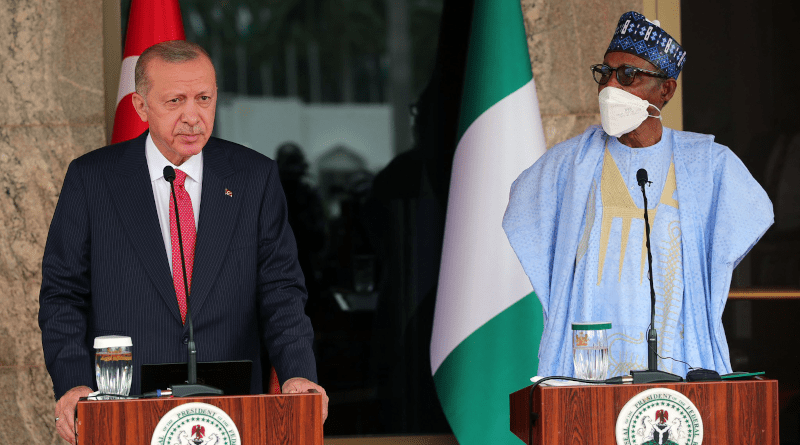 Turkish President Recep Tayyip Erdogan’s visit to three Gulf of Guinea countries last month brings attention to the importance not only of this body of water, but also the competition for influence there. The Gulf of Guinea is hotter than ever.

Erdogan visited Angola, Togo and Nigeria on his latest visit to Africa. The trip’s plotting emphasizes the role these three states play in the immediate future of Ankara’s interests in this part of the continent.

In 2005, Turkey began its new policy approach to Africa. The “Africa opening” doctrine is key to Ankara’s approach to political and economic relations on the continent. With the appropriate mix of soft power tactics, Turkey has made important inroads into the Gulf of Guinea area. Following the successful development of Somalian security solutions for tackling piracy off the coast of that country, Turkey quickly turned its attention to this part of Africa, along with other actors such as Russia and China.

Nigeria is the key state on the Gulf of Guinea and is Turkey’s largest trading partner in this region. It is the origin of much of the crime that takes place on the waterways draining into the Gulf of Guinea. Erdogan first visited Nigeria in 2016. In April 2018, the two countries signed a defense agreement for training and equipping Nigeria’s armed forces. The Turkish president has developed a close friendship with Nigerian President Muhammadu Buhari, which is important in the new energy environment.

A Turkish ambassador pointed out the historical connections that Turkey has with this part of Africa, especially Nigeria. Relations between the Ottoman Empire and the Kanem-Bornu Empire that existed in the 16th century translate today into Ankara’s soft power by emphasizing its ties with Nigeria, Niger, Chad and Cameroon. Such concepts make up part of Ankara’s outlook, which is attractive to many audiences.

Erdogan showed another side to Ankara’s soft power capabilities in the visit to Angola. Angola is just as key for Turkey as Nigeria because of the historical role former President Jose Eduardo dos Santos played in anti-colonial movements and sentiment. Angola was a Soviet client state with a strong Cuban presence during the Cold War. That memory is still strong and how Ankara and Moscow see Angola is important in terms of geostrategic outlook. Ankara is building on ideology, while Moscow is looking at logistics — an almost complete flip in terms of policy outlook.

Importantly, Erdogan spoke to the Angolan parliament. He warned that the fate of humanity cannot and should not be left at the mercy of a handful of countries that won the Second World War, in reference to the West, but also to Russia. “There are still those who cannot accept the independence, freedom and equality gains of the African peoples. We have been witnessing the recurrence of this indigestion recently,” he said in reference to the influence of other external powers.

Moreover, from Erdogan’s point of view, it is important to embrace the peoples of the African continent without discrimination. The Turkish president rejects “Western-centered orientalist” approaches to the African continent, as he pointedly told the Angola parliament. This type of approach also helps to play against Francophone interests.

On the security front, Angola is in a prime position to receive Turkish-made combat drones and armored carriers to add to the country’s growing arsenal. Ankara sold its first piece of equipment to Angola 19 years ago, so there is a long tradition of bilateral defense cooperation.

All of the above fits into the maritime sector and Turkey’s access, just like any of the other extra-regional actors in the Gulf of Guinea. Many different countries have deployed counterpiracy missions in these waters. Turkey’s involvement is not new, as its navy commandos have dealt with freeing hijacked boats.

Thus, maritime security and the maintenance of free transit is a key factor. Key ports — including Abidjan and Sassandra in Ivory Coast, the Port of Pennington in Nigeria, Kome Kribi 1 Marine Terminal and the Port of Kribi in Cameroon, and Puerto Macias in Equatorial Guinea — are the outlet for hundreds of millions of people along this Atlantic arc of West Africa. Turkey has built up a steady portfolio of interests over the past two decades that are part of its trade ecosystem. The fact that Erdogan visited Nigeria and Angola shows Turkey is targeting the transport of oil from two of Africa’s largest producers. The transit of these goods is important for international commerce.

Russia’s place on this maritime map is of high interest. Moscow’s deployment of the destroyer Vice-Admiral Kulakov to the Gulf of Guinea on a counterpiracy mission at the moment of Erdogan’s visit was reminiscent of the power games the two countries are playing in various other theaters. The Russian ship dispatched a helicopter to allow marines to board the MSC Lucia, which had been hijacked 86 nautical miles southwest of the Agbami Oil Terminal, part of Nigeria’s offshore Agbami Field. But upon arrival and inspection by the Russian marines, the pirates had already left. A distress call had gone out, but the timing and lack of evidence suggests geopolitical and “optic” games.

Erdogan’s Gulf of Guinea visit is yet another stage in the development of Turkey’s foreign policy doctrine, which is in a very active stage of projection, where sea access is important to achieving its national strategic goals.

This article first appeared at https://www.eurasiareview.com/