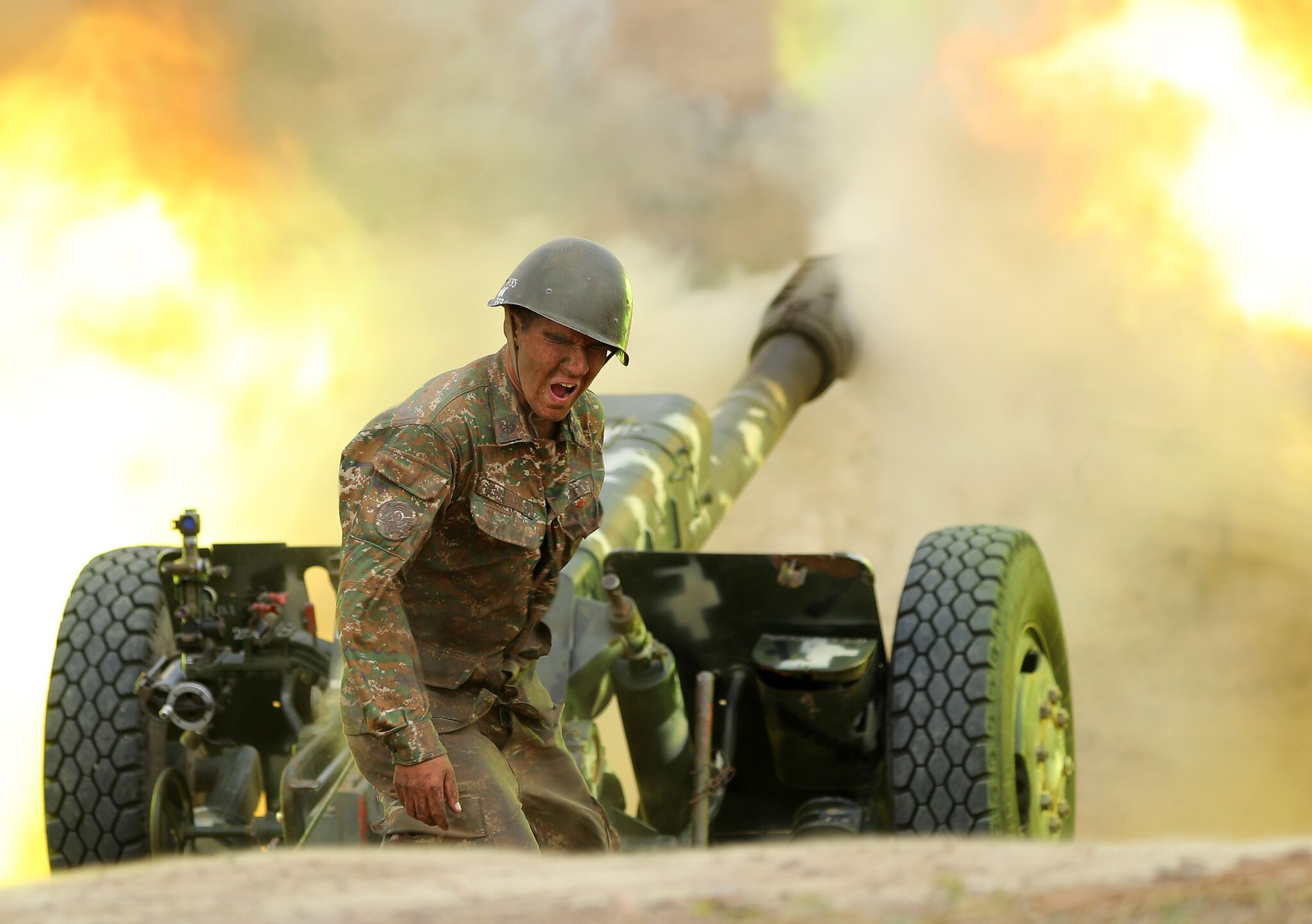 It reads crazy. It doesn’t either appeal to principles of logic even in the crudest flow of logic sequence. What is humanitarian about the exchange of human corpses in an unjustifiable armed conflict? How does a chief supplier of arms to opposing sides in a war co-chair peace talks?

That is exactly the story on the ground in the Nagorno-Karabakh war between Armenia and Azerbaijan. Common sense has indeed become so rare a world commodity that it is now fetching a price as high as the priceless human life.

And in order to paint the extremely unfortunate Armenia and Azerbaijan conflict picture, there is neither need for even trying to venture into the account of Aristotle’s friend and teacher Plato in his Socratic dialogue nor get entangled in Descartes’ Discourse on Method or Thomas Paine’s 1776 Common Sense polemical pamphlet.

Turkish journalist Mahir Zeynalov, his Armenian origin notwithstanding, maybe puts it much better. Every observation he makes gives rise to a pertinent question.

He outlines that along global sovereignty lines, the Karabakh break-away territory in Azerbaijan is not recognized as an independent state – not even by Armenia itself.

Question one: How come then world governments – leaders, to be specific — stand divided on something that is straight forward?

He says Armenia, backed by Russia, puts the conflict as a self-determination fight of Armenians in the area. Armenia occupied those territories and helps Karabakh Armenians financially and militarily.

Question two: In addressing issues of global considerations, how does one put forward an argument for a self-determination fight without a right?

Pitched between Russia and Iran, he observes, the conflict area is home to one of the world’s largest oil and gas deposits.

Question three: Isn’t it here that we should see the oil and gas natural resource turned-curse, emerging as a major underground factor in the Armenia-Azerbaijan conflict just as it has been the case with Syria, Libya and the like?

A dip stick into the area’s history sump reveals that for centuries Azerbaijanis and Armenians lived together in Karabakh. Today’s Armenia and capital Yerevan was originally mostly populated by Muslim Turks — the Azerbaijanis.  It is the 1800s Iran-Russia wars that changed the demography of south Caucasus.

Question four: Now, from the set theory membership point of view, if Muslim Turks constitute the Azerbaijanis in traditional Armenia, who are the Azerbaijan Turks – literally the Turkish Muslim Turks —   we meet with in the late 1980s, being forced to relocate?

Then we are told of 150,000 Armenians who also had to leave Azerbaijan.

Question five: Forces behind this operation aside, are there Armenian Muslims? What is their strength and where are they?

Our history dip also reveals an ethnic minority of Armenian Muslims known as Hamshenis and that they mostly live in Russia and Turkey.

Question six: Does this provide sufficient cause for the Russian and Turkish governments’ cross border interests in the conflict when the majority of the minority Armenian Muslims live within the boundaries of both countries? What are they pursuing?

There is a revelation of an 18th century Blue Mosque in Armenia. My memory takes me back home to the peaceful Zanzibar main island of Unguja in the United Republic of Tanzania where we have Msikiti Mablue –literally Bluish Mosque.

Question seven: I don’t know whether the Zanzibar and Armenia mosques have links. But, can we take Armenian-Azerbaijan leaders and their foreign allies – Russia and Turkey — on a peaceful co-existence pilgrimage to Zanzibar for Friday prayers at the Msikiti Mablue on the shores of the Indian Ocean?

On the heels of the fall of the Soviet Union, Armenian forces are recorded to have mounted a big campaign against Azerbaijan territories, including Karabakh – claiming more than 300,000 lives!In 1992 Armenia occupied seven Karabakh provinces driving about one million Azerbaijani civilians out of their homes under the pretext of building a (peace) buffer zone!

Question eight: Killing man and its elevations on religious fronts notwithstanding, how do you build peace with war ingredients? This was an affair of the Romans’ Si vis pacem para bellum – if you want peace prepare war – lifestyle. Furthermore, how does this case differ from that of the Golan Heights settlements developed in Palestine by Israel?

About thirty years down the conflict road, the Armenian-Azerbaijan volcano has erupted again. This proves that it is non-extinct. In the face of its flowing lava, Azerbaijan offered to give the highest possible autonomy to the region if Armenia agreed to vacate the seven occupied provinces. Armenians refused.

The United Nations Security Council, with the blessing of Russia, which is the chief supporter of Armenia, adopted four resolutions calling for, among other things, withdrawal. Armenia refused.

Russia went on to convince Armenia and Azerbaijan on a ceasefire on what was called as a truce on humanitarian grounds. Of all things, this was to give chances to the warring parties to exchange bodies of the dead soldiers and prisoners of war. The International Red Cross Committee was to play the role of an intermediary after which adherence to truce conditions would follow and be strictly observed.

To say the least, this Russia-brokered ceasefire must have been one of the loosest in recent war times. Past the official appointed hour, violation accusations were already flowing from both sides. Peace prospects in the region hang in the balance.

While Iran Islamic Republic Chief of Staff assured Azerbaijan support on its territorial integrity, Iranian President Hassan Rouhani is on record for having told Armenian Prime Minister Nikol Pashynian: “Our region can no longer take instability and new wars.”The Prime Minister responded with expressing concern about “foreign interference in Armenian disagreements with Azerbaijan.”

Azerbaijan pleaded for the inclusion of Turkey in the peace negotiation talks. Russia, which is co-chair and supplies arms to both warring sides, turned down the request. Other co-chairs include France and United States. France has already issued a statement simply calling for strict adherence to ceasefire agreements.

The United States cannot say much considering the pending presidential elections and the special friendship, including business ties, already unfolding in the media between US incumbent President Donald Trump and his Turkish counterpart Recep Tayyip Erdogan.

Turkish foreign ministry statement has already said: “Azerbaijan has shown the whole world that it can take back its lands that remained under control for some 30 years, by its own means and confidence…” This is a big lie because Turkey supplies arms and logistics. It has also recruited mercenaries from Syria into the area of conflict area.

Until recently it was the biggest arms seller to Azerbaijan. This position has now been taken by Russia. The Turkish statement also pledged to continue to stand by Azerbaijan “in the field and at the table.”

If anything, the Turkish government statement gives Russian President Putin leeway in keeping Erdogan out of the peace making setting, destabilizing global capitalist and socialist oriented political leaders and institutions, besides putting NATO unity at risk.

Perhaps looking at the situation from a more inspired and cautious position, Canadian foreign ministry called on Turkey to stay out of the conflict and threatened to stop arms exports to the country upon suspicion that weapons systems were being used in the conflict in a manner that could violate human rights.

The Canadian observation could be very right. There is very little, if no, sincerity in what is transpiring over the Armenia-Azerbaijan conflict. Via a WhatsApp chat, a friend told me: “We are at the time like when Jesus started His mission. Only a prophet can…” Has the Nagorno-Karabakh crisis really brought the world that far?

Sound practical  judgment concerning everyday matters. Basic ability to perceive, understand and judge what is shared by all people.